'We Want Affirmative Action In The Private Sector' 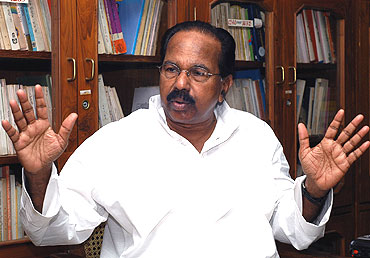 outlookindia.com
-0001-11-30T00:00:00+0553
Former Karnataka chief minister, Congress spokesperson and general secretary of the AICC, M. Veerappa Moily, has held several key positions in his 30 years of public life. But he has never been a Lok Sabha MP or a cabinet minister. That changed on May 28, when he was inducted into Prime Minister Manmohan Singh's new government. Moily, the Union law minister, spoke to Chandrani Banerjee about the need to usher in reservations in the private sector and reforms in the judiciary. Excerpts:

Is there a plan to introduce reservation in the corporate sector? (Moily headed the last government's Oversight Committee for implementation of reservations for obcs in education).

There is a concept called corporate social responsibility. Corporates must identify the importance of equal opportunity. They should recognise talent by rewarding it and also encourage others to come forward. They must talk of oneness. Good business means equal opportunity to everyone. Keeping a class away is not good even for the private sector.

To what extent will this affirmative action apply?

It will be across the country and for everyone. In the 1960s, America introduced the concept of equal opportunity and they have the Equality Act. Similarly, we want to have affirmative action here in the private sector.

Will industries in both rural and urban areas have to introduce affirmative action in awarding jobs?

There's no rural-urban divide. The multinationals are following this concept in America for many decades and doing well. I don't see any reason for not trying it out in our country.

What about the higher levels of judiciary? Is there need to introduce reservation there as well?

We have not applied our mind to this issue. Reservation in the judiciary is initiated at the lower level. As of now, there is no such plan for the higher judiciary.

The Judges (Inquiry) Bill 2006 which lapsed in the 14th Lok Sabha is awaiting attention...

The bill seeks to amend the Judges (Inquiry) Act of 1968 and establish a national judicial council to look into allegations of misconduct or incapacity against judges of the high courts and Supreme Court. This is meant to ensure transparency, accountability and credibility of the judiciary. This bill will surely be taken up.

At the last count, there were nearly 40 lakh cases pending in the high courts and 46,926 cases in the Supreme Court. Shortage of judges is considered one of the reasons for this...

I disagree that only lack of judges is the reason. Investigations are not supported with modern systems. Also reforms are required at the administrative levels so that the system irons out problems before approaching the judiciary.

What will the government's stand be on Justice Soumitra Sen? (He is a Calcutta High Court judge who is facing charges of misappropriation of funds and the cji recommended his impeachment to the prime minister in August 2008).

There is no second opinion. He appropriated Rs 32 lakh as a court-appointed receiver in a 1993 lawsuit. A three-judge committee found him guilty of depositing the money in his personal account. Now a committee comprising Justice D.K. Jain of the Supreme Court, T.S. Thakur, chief justice of the Punjab and Haryana High Court, and senior Supreme Court advocate Fali. S. Nariman will investigate the grounds on which the removal of Justice Soumitra Sen was recommended. We are awaiting their report. As soon as we get it, Parliament will move on the matter.

Is there any strategy to cut short lengthy court battles?

We will have a holistic approach towards the problem. The judiciary alone cannot be blamed for the huge pendency. The organisations that are supposed to work in tandem with the judiciary need to be reformed. We must be supportive in terms of documents, research and facts. Only then will the delivery of justice be faster.

Is It Singular Or Plural?