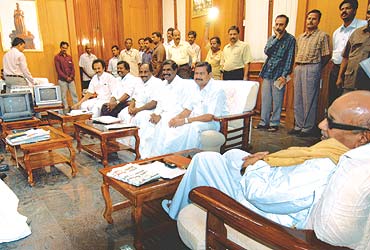 The moral of the story is not greed, but how a fickle electorate has learnt to maximise its interests with every regime change. Union finance minister P. Chidambaram has described the Dravida Munnetra Kazhagam's poll manifesto as "the hero of the 2006 elections". He didn't get the entire picture. The DMK manifesto, scripted by M. Karunanidhi, was "the hit movie", and its hero was the free colour TV scheme. But the film had a strong supporting cast too: Rs 2 per kg rice, free gas connections and gas stoves, waiver of cooperative loans for farmers, and 2 acres land for landless farmers.

MK inked the Rs 2 per kg rice order immediately after assuming power and PDS shops were offering the scheme from June 3, the CM's 83rd birthday. The waiver of cooperative loans followed soon after. Now, the breaking news in TN is television. On the birthdays of Dravidian movement stalwarts C.N. Annadurai (September 15) and Periyar E.V. Ramasamy (September 17), 30,000 CTVs will be given away to BPL families who do not own one. The 2006-07 budget has allocated Rs 750 crore for the scheme. According to officials of the Electronics Corporation of Tamil Nadu (Elcot), the nodal agency for the procurement of the CTVs, Videocon (15,000 sets), Kitchen Appliances India and Dixon Technologies India (7,500 each) are the vendors. Each unit costs Rs 2,965. In this fiscal, 30 lakh CTVs are expected to be distributed. While vendors for the first phase were chosen through national competitive bidding, for the remaining lot Elcot will invite international competitive bidding. In the next two fiscals, 60 lakh more sets are to be given away.