We Own It, We Show It

The BCCI is working on their own TV channel. It seems there are fabulous fortunes to be made. 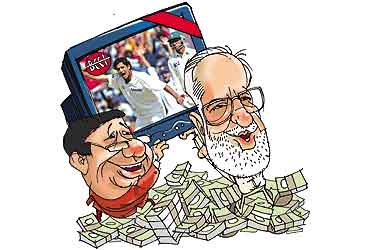 "The value of Indian cricket is at least $2 billion in the next four-five years."

"It can be as big as the NBA (the basketball league) in the US."

"An Indian Test player can earn as much as Michael Jordan used to: $40 million a year."

There are strange new sounds emanating from the edifice that is the Board of Control for Cricket in India. And we might do well to pay attention to the group within the board that's making them. It's led by I.S. Bindra, the Punjab Cricket Association president who's made Mohali one of the best managed cricket grounds in the world, and Lalit Modi, the new Rajasthan Cricket Association president, who handled the early marketing and distribution in India for espn, Ten Sports and DD Sports when each was launched.

The key to the Promised Land is a proposal the duo moved at the BCCI working committee meeting on the first of this month: the board must set up its own TV channel. Modi's logic is so compelling in its simplicity that you wonder why no one thought of it before. "A sports channel is all about rights. BCCI owns the rights to all cricket played in the country. Why not have our own channel?"

His math is even simpler. The number of homes having televisions in India is close to 100 million, out of which a large percentage has a cable connection. Even if 50 million homes agree to pay $1 a month for BCCI's channel, it will add up to $600 million a year just in subscription. Then there is the advertising, whose rates can go up to as much as $10,000 for a 10-second spot, as they did for India's tour to Pakistan last year. "Why only $2 billion in 4-5 years," says Modi about Bindra's estimate, "it can be $2 billion a year." Such an exponential rise is not exactly inconceivable. espn, under Modi's stewardship, had paid the BCCI $12 million in 1994 for the rights to cricket in India in the...