'We Have To Ensure A Fair Trial, That's The Least People Expect'

The law and justice minister on the steps being initiated by the UPA government to restore confidence among the people of Gujarat. 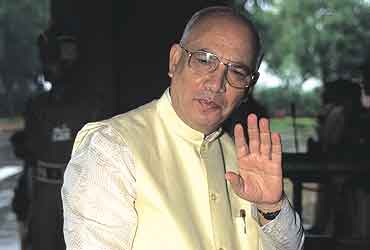 outlookindia.com
-0001-11-30T00:00:00+0553
Expressing serious concern over the shoddy treatment meted out to the victims of the post-Godhra riots, Union minister for law and justice Hans Raj Bharadwaj maintains that the rule of law must prevail in Gujarat if people have to live without fear. He talks about the steps being initiated by the UPA government to restore confidence among the people of Gujarat. Excerpts from an interview with Murali Krishnan:

What is being done to help the victims of the post-Godhra communal riots?
The Supreme Court ruling by Justice Doraiswamy Raju and Justice Arijit Pasayat in April rightly pointed out to the Gujarat government’s laxity in bringing the guilty to book. That is why the retrial was done outside the state. Anything said or done now must only respect that sentiment and carry the work forward. We have been assisting the courts in Maharashtra (in the Best Bakery case) to ensure the criminals are brought to book. Now that we have managed to sort out the tangle of the appointment of the public prosecutor, things will move. The victims have to be satisfied that a fair trial is being carried out. This is the bare minimum that the people expect us to do.

Do you think the guilty will be punished?
When ghastly killings take place in the land of Mahatma Gandhi, who taught us and the world non-violence and passive resistance, it raises pertinent questions and takes on a new dimension. All that has happened has reversed Gandhi’s philosophy—human beings were treated as guinea pigs. Look at it from the humanitarian angle. The modern day Neros who perpetrated this violence have to be found out and punished.

But who will do this? Will an independent investigating agency be appointed?
This is for the home ministry to look into. Those within the administration and outside who were responsible for the violence must be punished. They (the state government) have managed to browbeat the media and other institutions. Instead of independently ordering an investigation, the opposite happened. As the Supreme Court order points out, the modern-day Neros were looking elsewhere when the Best Bakery and innocent children and women were burning, deliberating how the perpetrators of the crime could be protected.

Are you surprised that nothing has happened to provide that healing touch to the victims?
Sooner or later, the investigation will have to become more deft. Even Vajpayee realised what went wrong, but Modi is still there. This new line of thinking within the BJP and the unusual defence of Modi gives room for suspicion. Something should be done to those who subverted the law and turned a blind eye to violence.

So, what’s to be done now?
We have to create a sense of belonging and confidence among both Hindus and Muslims—all communities must feel safe and secure. At the same time we have to ensure a fair trial.

'The Controversial Railway Report Will Be Made Public'