'We Have To Accept Ground Realities'

The man behind the ongoing dialogue process between the envoys of the Dalai Lama and the Chinese government speaks: 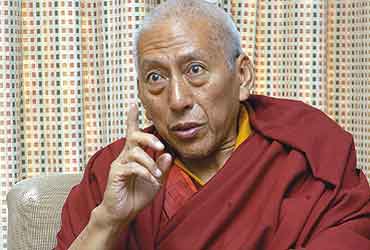 outlookindia.com
-0001-11-30T00:00:00+0553
Elected as the first prime minister of the Tibetan government in exile, Prof Samdhong Rimpoche is the man behind the ongoing dialogue process between the envoys of the Dalai Lama and the Chinese government. Excerpts from an interview:

Why has the Dalai Lama given up on his dream of an independent Tibet and expressed his willingness to remain within China?
An independent homeland is the right of all Tibetans, but today, it is only an emotion. We have to accept ground realities of the new world order. We feel that the Dalai Lama's middle way approach to seek genuine autonomy for Tibetans is an achievable objective and are therefore moving ahead for it.

But prominent Tibetans in exile have slammed the Dalai Lama's middle way approach as a "sellout to China".
For us, the issue is not so much the future of the Tibetans in exile, and how we all will return, but genuine self-rule within the framework of the Chinese constitution for the six million Tibetans inside Tibet. Their religious and cultural identity is under threat. If some people are angry at our policy, it doesn't bother us.

Why are you so desperate to please China?
Ever since the envoys of the Dalai Lama began meeting the Chinese government officials on three successive trips over the last three years, we are trying to create a congenial atmosphere to pave the way for starting formal negotiations between the two sides. We do not regard China as an enemy anymore, but more as a party with which we will have to negotiate. They have sought a reassurance from us on this. That's why, even though we do not agree with their 'white paper on Tibetan minorities' (Tibetans do not agree with the contours of the Tibetan Autonomous Region, nor with the kind of autonomy granted) issued last year, we have refrained from criticising it outright. We are trying to build confidence and if this is being noticed, it's alright with us.

Despite all your efforts at confidence-building, China has rejected the Dalai Lama's latest offer. Where do you go from here?
We do expect them to reciprocate but if they don't, it's just too bad. Our efforts, however, will continue and we are hoping that the next delegation of the Dalai Lama's envoys will be permitted to visit China this year too.