'We Have Managed Both The Boom And The Bust'

Does the shoe fit? The new CEO of Infosys Technologies on the challenges ahead. 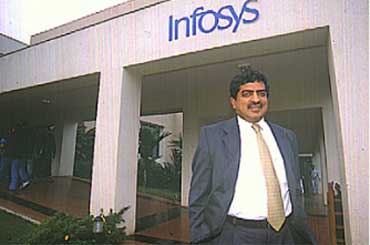 outlookindia.com
-0001-11-30T00:00:00+0553
It's a tightrope walk ahead for 46-year-old Nandan Mohan Nilekani, scheduled to take over the reins of India's poster company in infotech on March 31. On the eve of taking guard as ceo of Infosys Technologies, he chose to gauge the trends in a market he's extremely familiar with—the United States (Nandan cut his teeth in markets there, where he was in charge of worldwide sales and marketing between 1981 and '86). Before setting off for the US, he spoke to B.R. Srikanth. Excerpts:

How does it feel reaching the top rung of the ladder?
I am certainly very excited. This is a very challenging time for Infosys. In 1999 and 2000, we saw spectacular growth thanks to the boom in the global economy and spending on technology. Last year was one of reversal and slowdown. So, in the last three years, we have learnt to manage both during the boom and the slowdown. It's been a transition from one end of management to the other. Now we are entering a new era where IT is very important, but people want it at an affordable price. So navigating through the short-term challenges—a decline in demand for software or cancellation of projects due to price pressures—as well as gearing up the organisation for long-term opportunities is the key challenge right now.

How different will the post be from the one you occupy now?
Well, with this I have complete executive responsibility of the company. Mr Narayana Murthy, as Chief Mentor, will spend a lot of his time nurturing the enormous talent that we have. Generating a next generation of leaders is very important.

What are the challenges you see for the company in the next two years?
In the short term, we are facing a challenge because the market has slowed down and the boom in spending on IT has declined. Companies are far more cautious which in turn has made the market for IT services of the kind we provide much more competitive. That, in turn, has meant that it's far more difficult to get customers. There's price pressure. But we have to show growth and profitability in an economically challenging environment. This requires us to be focused on costs, productivity, the customer. In the long term, there are some strategic issues. We believe there's a great opportunity for IT services and because of increased competition, we will compete more and more with the Big Five and other large firms in the US and Europe and new emerging companies from countries like China. So we have to use this opportunity to build a strong brand, have deep client relationships and more service offerings—systems integration and IT outsourcing. This also means expanding our market presence, entering new vertical markets and new service offerings. The trick is to balance the short-term with the long.

You spoke of 1999 and 2000. How soon will Infosys be able to repeat such three-figure growth?
I think the kind of boom in the global IT economy culminating in such fantastic figures will not be repeated. That was an unusual and exceptional period thanks to the internet, telecom deregulation and huge amounts coming into the market. That is unlikely to happen in a while.

Are you interested in IT-enabled services that apparently has immense as-yet-untapped potential?
We see BPO (business process outsourcing) as a growth opportunity and as part of our strategy, are looking at various options on how to go about it. The focus will be on high-end, value-added bpo services.

Are you thinking of short-term cuts in profits to build long-term capabilities and carving a niche for yourself in the global market?
I don't want to comment on margins, but I think a lot of the focus has to be towards our customers.As we position ourselves as the leader in business transformation through technology, we need people at the front end—selling, consulting and delivery—who understand customer issues and their strategic choices and remain proactive in suggesting to them how to use technology for more effective business. So, that calls for investment in the front end.

You spoke of likely competition emerging from companies in China. Would you explore the possibility of collaboration with some of them?
One, at the country level, if you think India has certain advantages, then China is a competitor because it also has some advantages. So we are looking at setting up a facility in China, both from a development as well as marketing perspective.

Indian tech stocks have slipped into a dormant phase. Shouldn't major players like Infosys work on strategies to rejuvenate them?
Our job is to run our business efficiently. We will focus on that.