Can it get any worse for the Congress? In a poll year, the party hobbles tiredly along. 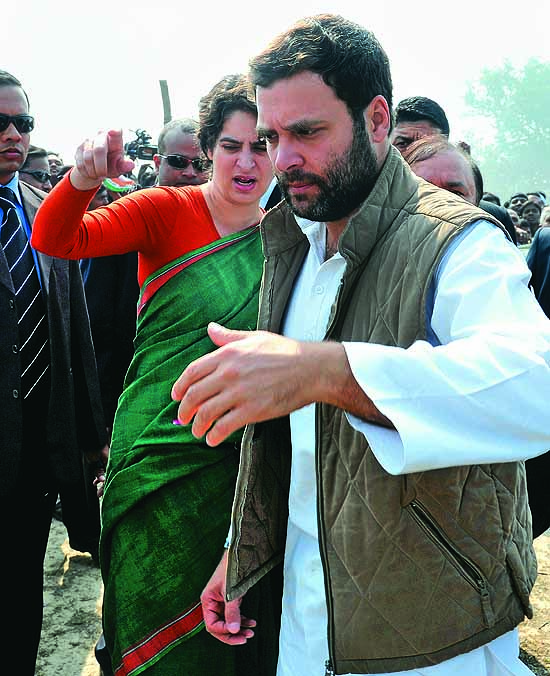 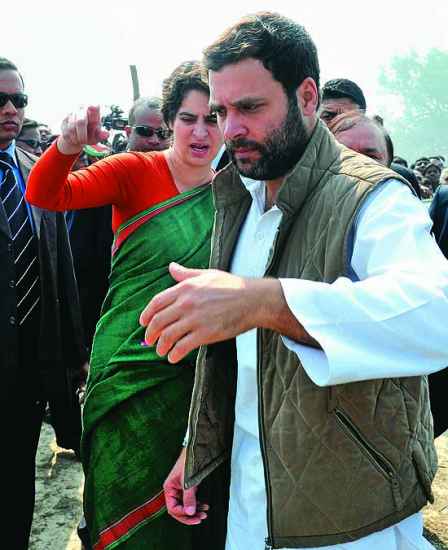 Last week, Priyanka Gandhi walked into the Congress’s high-level strategy meeting at her brother Rahul’s house when he himself was not present. The usual frisson of excitement that attends her every political gesture followed. A connection was made to the party being at its lowest ebb: would she start taking a more active role and electrify an organisation that is dispirited, defeated and directionless? Like in a spaghetti western, the excitement dip­ped as quickly as it had risen. “She joined only in the last minutes of the meeting,” a party source said, dismissing all speculations.

It’s a measure of the party’s despondency that wild speculation thrives about Priyanka even when it has said that an “important announcement” will be made in Delhi on January 17—probably related to her brother Rahul. Already Prime Minister Manmohan Singh has made what is being seen as his “farewell speech”, in which he has hoped that history will judge him more kindly than the media, the opposition parties and people in general have. In earlier statements, he’d even said Rahul would make a worthy successor. Manmohan’s reference to the nuclear deal with the US as his crowning achievement—with no mention of the RTI, nrhm, NREGA and the Lokpal bill—shows his eye is clearly on the exit door. Now wonder he seemed to be speaking only for himself.

All this—especially that much-ballyhooed press conference, only his third in nearly 10 years—is to be seen in the context of the party’s recent assembly election defeats, the continual criticism its government at the Centre has been facing for corruption, terminal indecisiveness and policy paralysis.

From all around, the Congress and the UPA coalition it leads are being seen as a losing bet. The frustration is all too evident. “The PM actually lost the opportunity to shield the image of his government and speak about its real achievements. It was demoralising and against the idea of Congress when he said his biggest achievement was the nuclear deal,” says Shivanand Tiwari, a JD(U) leader. In his own party, Manmohan’s speech is being seen as “demoralising and surrendering”.

Allies like the Trinamool Congress and the DMK have cut loose. The NCP has announced it will partner the Congress in elections only in Maharashtra. “It’s not that we don’t want to contest elections with them—it’s the Congress which seems to not want to contest with its allies. It doesn’t know how to behave well with its allies,” says D.P. Tripathi of the NCP, who describes the situation in the Congress as “very complex”. Now-on-now-off allies BSP and SP seem wary, putting the Congress in deep disadvantage in Uttar Pradesh, which sends 80 MPs to Parliament. The SP has outright ruled out allying with the Congress, while BSP insiders steer away from commenting on the alliance question, saying “the rapidly degrading image of the Congress is a big concern”.

Business economists and economists with a welfarist approach are slugging it out in hundreds of column-centimetres written around the brash, new bearded figure on the national scene. (And it’s not Rahul.) Even RBI governor Raghu­ram Rajan has said that a stable new gov­ernment would be positive for the economy. This seems implicitly to go in favour of Narendra Modi, seen as decisive and pro-market. And the new kid on the block, AAP, is entirely feeding off an anti-Congress epidemic.

The Congress’s internal problems abound. Though it looks united in rais­ing slogans for the Gandhi family, divisions are rife. The faces the party is peopled with do not seem suitable for the “you can’t imagine” changes Rahul seeks to ring in. Says an insider, “Rahul has a great vision and a better political frame for the future. He does his homework. But we are going through a tough time and experiments are not good when elections are at the doorstep.”

A mood change against the Congress is also becoming evident in the bureaucracy. Union home minister Sushil Shinde is looking to have a retired Supreme Court judge to probe the spying on a young woman by the Gujarat government. But so far, no case has been registered against Modi’s right-hand man, Amit Shah, who’s said to have organised and supervised the tailing.

“The Congress is actually in a very complex situation. As of now, it is in no position to lead. It doesn’t know how to treat allies.”
D.P. Tripathi, NCP leader

On the other hand, the BJP is making all-out efforts to show the Congress in bad light on corruption. A panel of five BJP MPs has approached the new chief minister of Rajasthan, Vasundhararaje, for an inq­uiry into Robert Vadra’s land deals in Bikaner. In Himachal Pradesh, chief minister Virbhadra Singh and his wife Pratibha, also a Congress MP, face allegations of receiving unexplained, unsecured loans from a steel firm. The Congress high command has distanced itself from the matter; the prime minister refused to answer questions on this controversy at his press conference. But it’s yet another denting of the Congress image and that of the UPA.

Complicating all this is the general unrest due to price inflation and the rise of the AAP, which, to be sure, has surprised the BJP too, not just the Congress. Some political pundits say  anyway that the fall for the Congress this time could be even worse than in 1977, when the post-Emergency elections were held and a government led by the Janata Party came to power. In that watershed year, there had been scope to see some hope for the Congress in the southern states. But in 2014, they say, even the south will prove elusive.

Clearly, it is the worst of times for the party, which began with the assembly election results: it has kept Mizoram, but lost important states like Rajasthan and Delhi and was unable to benefit from anti-incumbency in Madhya Pradesh and Chhattisgarh. Some office-bearers, like general secretary B.K. Hariprasad, take recourse to tame rationalisations like “winning or losing is one thing, we are moving in the right direction”. In a clear reference to Modi’s projecting himself as “chhote sardar”, he says, “The BJP has won where it is strong, but it doesn’t have numbers in other states. Tell me, where they will get the seats? People will realise one day what Man­mohan Singh, the real sardar of the nat­ion, has given to the country.” On its part, the party says it has “accepted the verdict, learned the lessons and decided to transform itself”. The question is: does it have time? And what should it do?

Shivanand Tiwari of the JD(U) seems to have an idea, and some kind words for what the party has stood for in its more than 125 years of existence. First what he has to say about the party’s long history and those who are zealously but implausibly predicting its demise: “It’s not good to have a democracy with just one big national party. That would be damaging. The Congress becoming history would not be good for politics and democracy.” And his idea for revival? Hark to the beginning of this article for a clue.  “Rahul is ineffective,” he says, “and has had no impact in these last few years. It’s time the Congress brought Priyanka to the front.” But he’s at least as serious as any Congress member should get on the party’s fortunes.

Your Call Is Waiting