'We Don't Have Collective Dreams, And Therefore Heroes'

India's favourite creator of heroes deconstructs heroes and the audiences that fete them and emulate them. 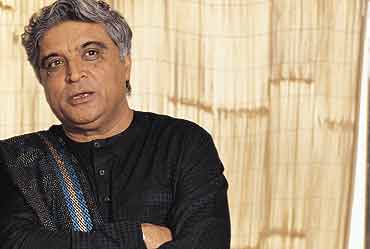 Javed Akhtar, with Salim, created what is probably India’s most enduring hero and anti-hero—the Angry Young Man, in the 1970s. Though he rarely writes scripts now, his last hero, Hrithik Roshan in Lakshya, transmogrified from a wastrel contortionist dancer into a focused and patriotic soldier, fighting in Kargil. Most recently, he helped pick a new-age icon, as a judge, in the hit TV reality show Fame Gurukul. Here Outlook asks the legendary scriptwriter and lyricist where all the heroes went. India’s favourite creator of heroes deconstructs heroes and the audiences that fete them and emulate them. He talks about the loss of ideals and the new materialism that is chipping away at the morality that holds up a hero in the spotlight.

Do you think present that the film heroes are less idealistic or angst-ridden and more conformist than when you started writing? Is that reflective of society now?
No, that’s not really true. When we started writing, heroes were very tradition-bound. Kartavya (duty) was more important than personal feelings. We brought a different kind of hero to Hindi movies. He was more individualistic, not willing to accept injustice. Now it seems improbable but our script for Zanjeer went from door to door and no one wanted to make it because they said ‘What kind of a hero is this?’ Deewar, people felt, was too claustrophobic and serious. This hero was like nothing they had seen before. In Trishul, the hero was fighting against his own father. I remember (veteran producer) S. Mukherjee telling me after Deewar he was glad our film got made and did well but that if we had taken it to him, he would not have made it.

What do you think heroes can do now that they couldn’t do then because audiences thought it was too radical?
See, there is an absence of idealism now. People are becoming more liberal, more westernised now and so they are more willing to accept heroes like that. A film like Salaam Namaste, where there is a physical relationship outside of marriage, can be made and can do well without being dogged by controversy now. When we gave a suggestion that there was a physical relationship between Sanjeev Kumar and Waheeda Rehman, in Trishul, or between Amitabh Bachchan and Parveen Babi, in Zanjeer, it was very daring even though those were not the central relationships in the film. That has changed. Recently the government (the I&B ministry) allowed kissing in movies. There was no controversy, no issue in the media about it. So, it shows how we have changed.

Do you think that the idealised hero—the hero as an archetypal good guy—has lost credence?
See, we are deprived of hero images now. A hero is a person who embodies contemporary morality and aspirations. Now, morality has changed, so the hero has changed. With times the hero image has changed, based on people’s aspirations. Now we have no collective aspirations or dreams so we don’t have heroes. Do we have a dream? Sure, but only for ourselves.

So, would you say that morality plays less of a role in the making of a hero these days?
Everyone has some morality. But we have rejected some old-style morals. Now we don’t have any accepted set of morals. We are not sure any more what our collective dreams, goals are or mission is. The angry young man was the last icon that we produced because he was a persona who reflected the tenor of the times. Now we are materialistic and everything else is secondary. Culture, traditions, etiquette and dignity are obsolete qualities. Now people want to win, more than anything else. But when we show a winner, winning at any cost, people are embarrassed by it. They cannot face their lack of morality.

Do you think that we really lack heroes as a nation?
We lack heroes. That is because we lack ideals. First you have to have ideas for a person to reflect or embody them. We lack ideas and ideals and when that base is not there, then, tell me, where will the hero images come from?

Do you think the media can manufacture celebrities? Not only that but also icons and role models?
There are people who are famous because they are famous. But there is a limit to it. You have to have some base, some connection with real people to be a real role model. The middle class does follow these things but the common man will really say what they think if they don’t like something. Somewhere you have to reflect them and their tastes if you are to be a hero. Real heroes have to appeal to the common man, to the grassroots because those are the people who matter.

Do you think that the intellectual as an icon has receded from public view somewhat?
There is a vacuum and it is not only here but worldwide. Earlier there were great leaders and people of stature everywhere in the world, whether you agreed with them or not. You could not agree with both Kennedy and Mao at the same time but you have to admit that they were big people. The world is ruled by pygmies now. The writers are not the same as they were. There are no Camuses, Sartres, Hemingways or Steinbecks anymore. That is because there is no ideology anymore, no moment that will create great leaders and great writers or creative people. First there has to be a collective ideology and the manifestation of that which politicians will fight to realise, filmmakers who will make films about, writers who will write about and actors who will act it out. The ideology creates the creative framework that will reflect it. A collective dream or belief is what creates all of the art and literature that reflects it.

Why do you that think heroism is such a male thing? Further, do you think that our movies etc are behind the curve on that?
That is the same everywhere. People feel you can desire a woman but you do not have to admire her. Things are changing but not as much as they should. See how parliamentarians are not allowing the Women’s Reservation Bill to be tabled in the House. All parties talk about it but even after all these years they have not been able to get it passed. They have managed to get some really controversial bills passed, including POTA, but they have not managed to table this bill. Why is that?

This year was punctuated by crippling disasters. Do you think we saw people stepping up us much as we should have?
See, we must give credit where it is due. In Bombay, we had this disastrous deluge and New Orleans had the same. In Bombay, there was no government, no administration and no disaster management plan. Only the people were helping each other and looking after each other. There was no crime here for a few days. There was quite a contrary picture in the United States. People here provided food, water and medicines to those who were stranded in cars for hours on end or were walking home. They took strangers into their homes. So some things are still there. Now, the common man is the only hero.

Lastly, some say that the hero has to cry for a film to succeed. Do you agree? Also, do you think this is indicative of the coming of a new-age hero in the movies?
I would say that for a movie to succeed, it should touch your heart. I feel that sometimes more pathos can be shown by not crying than by crying. You can never describe or exactly show an emotion, you can only suggest it. It is like indicating the tip of an iceberg and the person imagines the rest because the bigger part of the iceberg in inside.