We Didn't See The Inner Courtyard

Partition, we didn't relate to, except as event in the family chronicle. Till, we went back. 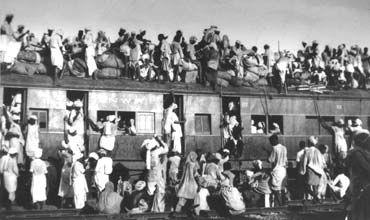 The year I do not remember, but there was great revolutionary fervour in Amritsar.... I’d spend the entire day at Jallianwala Bagh. Sitting under a tree, I’d watch the windows of the houses bordering the park and dream about the girls who lived behind them. I was sure one of these days, one of them would fall in love with me.


Manto, The Price of Freedom

My wife Nurjehan’s father is a Punjabi from Amritsar. In Dar es Salaam, where we were both brought up, she was a minority among Gujarati and Kutchi Indians. And so even she, speaking Kutchi and Hindustani, did not quite know until recently how much of a Partition child she was. Those of our generation hadn’t even heard the word. Her father and mother moved to Tanganyika in 1945, just before Partition. At Partition, the rest of the family made their escape in the night by train, leaving almost everything behind them, and headed for Bombay, whence they dispersed to Africa, England, Pakistan, Canada, and the United States. My father-in-law has returned to India many times, never to Amritsar. But now that we are in India, he does send us to look at the place of his birth. I wonder at the complex knot of feelings he must carry inside him, which he has never revealed. 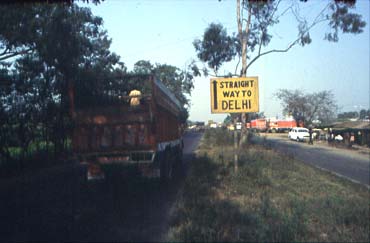 We leave Shimla by taxi, go down to Kalka, and then on to the Grand Trunk Road, which is not only the main setting but also a character in Kipling’s Kim. At Ambala—where Kim gives his coded message to the Colonel in his bungalow about an uprising in the North—we turn westwards. We pass Jalandhar and the great rivers of Punjab. On both sides, the fertile fields of the Green Revolution, growing wheat, rice, corn. The GT Road, built by the emperor Sher Shah Suri in the 16th century, begins at Peshawar in the northwest of Pakistan, passes through India, and ends beyond Calcutta in Bangladesh, spanning a distance of 2,500 kilometres. We don’t see the throbbing pedestrian road life that Kipling describes, but there are trucks and buses, and roadside dhabas with bare string cots spread out for travellers to rest and have their samosas, teas, paranthas, and the oiliest vegetable curries that go burning down your throat like acid.

This trip is going to be short; there is a three-year-old to cater to, who is particular about where he pees. If he does not approve of where you take him, he simply says, "Doesn’t want to", and holds it in. The adults have had malaria in Africa and know their mosquitoes, they think, it is the two kids they need to worry about. The GT Road enters Amritsar in a street that is bizarrely lined with bicycle shops; we find our accommodation, a guest house at the Guru Nanak Dev University, a splendidly spread-out green campus, and then, leaving a message for one Balwinder Singh who is to show us the old family house, we head for the Golden Temple, where in 1984, in an operation called Blue Star, Indira Gandhi had sent in troops during the Khalistan emergency, thus giving cause to her assassination.

Important for us is the family story: Nurjehan’s family had lived in the metal market area, Loha Mandi, behind the Golden Temple, two silver doors of which bear the handiwork of her grandfather or his father.

Operation Blue Star of independent India is, to some minds at least, a bitter and ironic reminder of another Amritsar bloodbath, the Jallianwalla Bagh massacre, which took place under British rule in 1919. It is to Jallianwalla Bagh, a short walk away, that we go directly from the Golden Temple.

The scene is as it has been shown in the movies: a narrow corridor leads to an enclosed park. The corridor was blocked as General Dyer (who had been a student at the Bishop Cotton School in Shimla) brought his troops at a run into the Bagh. At the General’s orders, they took aim with their rifles, and at his orders they fired on more than a thousand unarmed men, women, and children who had gathered for a protest.

Our 11-year-old is much taken with this story. Unprompted, he will describe it for his school project; and he will buy a book on the Indian Mutiny. This grandson of Partition refugees will return with a Sikh friend some years later and spend a night at the guest house of the Darbar Saheb.

In the middle of the night, in our room at the university guest house, the airconditioning—the surest way to keep mosquitoes at bay—goes off; in the morning, our three-year-old is covered in red spots. Fortunately, he will not catch malaria; the recommended quinine tablets, which have been administered hidden deep inside laddoos, must have done their work. 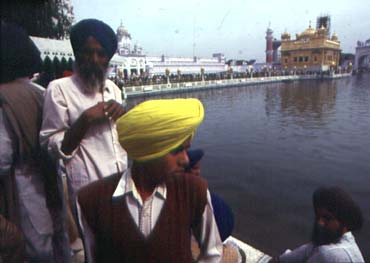 Two silver doors of the Golden temple bear the handiwork of my wife Nurjehan’s grandfather, who lived in Loha Mandi

But at breakfast who should come and meet us but Professor Balwinder Singh, about seeing whom we have just about given up hope. He is of medium height and reserved manner, and wears a red turban. He has been in communication with Nurjehan’s father, having met him once in Vancouver, and knows exactly where the family lived. And so off we go to Loha Mandi, in the walled city.

Parking the car near the Golden Temple, we walk into the warren of streets of the old city and finally arrive at a street devoted to copper and silver ware. At one such store, which has a wide entrance, an elderly man acknowledges our guide. Tall and close-shaved, a mild smile on his face and reticent by nature, he is introduced to us as Mr Chaddha. This is evidently not an everyday event for him, we are reminders, we are memory emerged from the sidewalk. Ghosts. Yes, he says and points, that one is the old shop. We turn to look across the narrow street at a two-storey dilapidated structure, padlocked. The building next to it, the Sindhi Club, has been demolished.

The story is that the reluctant family had been convinced to leave, after a day during which the rioters had prowled around; the family asked Mr Chaddha’s father to lock them inside and keep the keys, so when the thugs came around, he told them, "They are gone, the Muslims." Amritsar was under curfew, the British were nominally in charge, trying to control the violence. The family finally decided to leave on one of the crowded trains departing for Bombay, with a bag in the older boy’s hand and perhaps a few smaller belongings. There were the parents, the three sons, and four daughters. On the way, someone took the bag from the boy to stow it away. It was never seen.

We are shown the Chaddhas’ home, see the courtyard, the upper floor with a balcony looking down at the courtyard, the stone carvings decorating the walls...surely the abandoned home across the street would have been similar. We climb up to the roof terrace, observe the street. There is some nervousness about taking photos from here; some of the properties here must still be under dispute, I understand later. It is hard not to imagine the happy life of a child in such a neighbourhood. My father-in-law has some sweet and delightful tales about his boyhood here.

Back in the shop, Mr Chaddha, now warmed to us, tells Nurjehan, "Why don’t you call my sister Madhu? She was a friend of your aunt Sheru." A phone call is made from the shop. Past the "How are you, I am so-and-so’s daughter", the conversation gets emotional, Nurjehan weeps and we can tell that Madhu is doing the same on the other side. Madhu and Sheru had known each other since they were toddlers, and had been inseparable friends. Madhu had never heard from her friend, didn’t quite know where she went. If it was India, they would have communicated, so she must be in Pakistan, whose border is some 10 miles away. Lahore, the great city of all Punjab once, is less than 30 miles away. Pakistan TV can be received and is watched here, as we saw people doing at our guest house. Now it is the niece who brings the two childhood friends together.

On our way back, we take a detour to pass by a small warehouse from where sacks are being carried out. This, says Balwinder Singh, was the old khano; where Nurjehan’s grandfather was mukhi, the headman who presided.

In the afternoon, we visit Madhu and her husband at their apartment in a suburb. We have tea with them. The city cricket ground is next door and from their balcony you can watch the matches being played. The previous week one of the World Cup games was played here. Madhu and her husband have two children, a boy and girl, both in the United States. She giggles when told that her friend produced 12 children. Finally, we exchange addresses and depart.

Back in Toronto one Sunday morning, having sent a holiday greeting card to Madhu and her husband after our arrival, we receive a friendly phone call from her daughter in Los Angeles. Madhu is visiting her. Subsequently, we inform Nurjehan’s father and uncle in Vancouver about her; perhaps they should give her a call. Uncle Sherali, we learn later, took a flight to Los Angeles to meet her, whom he had not seen in more than 50 years. He took extra care with his dressing that day, his wife says. How exactly the meeting went, we never find out.

M.G. Vassanji is a Kenya-born Canadian author of Gujarati origin whose most recent novel is The Assassin’s Song.

Democracy, Hang Down Your Head And Cry