'We Can't Impose On India'

After the WTO breakdown at Cancun, the assistant US trade representative for South Asia was in New Delhi recently to discuss contentious issues. 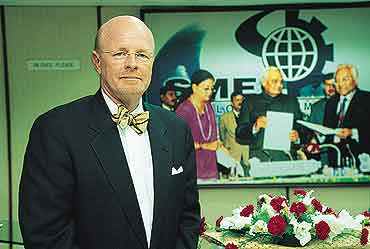 outlookindia.com
-0001-11-30T00:00:00+0553
After the failure of the WTO talks in Cancun, the US has been working hard to iron out the differences between the developed and developing nations. The reason assistant US trade representative for South Asia, E. Ashley Wills was in New Delhi—to discuss the contentious issues with Indian policymakers, including Union commerce minister Arun Jaitley. Excerpts from an interview with Alam Srinivas:

Post Cancun, do you think any immediate progress can be made in mid-December, when the wto general council meets in Geneva?
Well, that's why I am here to see if we can go beyond the rhetoric and the recrimination to a productive line. And how we ignite the Doha Round. So, we want to listen to what India's point of view is, we want to present our point of view. And, in the course of conversation with other countries, reach a point where we can reconvene as a collective and reach a conclusion. I am encouraged by what I have heard here in the last two days. There still is work to be done but I think there is hope.

What are the specific issues where work needs to be done?
The vital area in this round is agriculture. It's agriculture that's always been a defining issue and one where many developing countries—India included—have so much at stake. But we have a lot at stake too. So what can we do to arrive at a formula that would be acceptable to all the members?

With the kind of stance taken at Cancun by the developed and the developing nations, do you see any window of opportunity, any common ground?
That's why international trade negotiations are so much fun. We have said that we are prepared to radically reduce our subsidies and the domestic support of certain agricultural products. But we have also said that this must happen simultaneously with reducing tariff levels in countries presently closed to US exports and to the exports of other leading agricultural producers. We think a deal is possible. It's just a matter of arriving at the right terms that countries like India can accept and countries like the US can accept. It's going to be very hard and I am not sure if we can reignite the negotiations by mid-December. We might be, but I don't want to make a prediction.

The US may agree on agriculture, but what's the thinking in Europe and Japan?
That's what we got to find out during the wto negotiations. We don't agree with them on subsidies and they tell us they are willing to reduce their subsidies. The Japanese subsidise certain sectors to a considerable extent. I honestly don't know how far they are prepared to go. So we got to see what will happen when we sit on the table and deal our cards.

But what's your sense...
They are willing to reduce subsidies substantially. But, in Europe, they have so many complications. They have the prospect of bringing new members into EU. Among those new countries are major agricultural producers such as Poland. How will the EU's current agriculture policy affect the new members? One can argue that the timing is not ideal. We have an election in our country next year. You have one in your country in the next 11-12 months. These are factors. There are other countries that have electoral imperatives.

But the Singapore issues won't really prove to be bottlenecks?
We can reach agreements on what to do with them (the four issues of competition policy, investment, trade facilitation and government procurement). Some countries believe that not all of these issues are ready for inclusion at the wto. Some even think certain of those four should never be negotiated within the wto. We can reach an agreement that some of these four are ready now, certain may have to be dealt with in a different way.The importance of the so-called Singapore quartet has been exaggerated. They will not be the deal killers. Agriculture is the one that matters. And that's where we are investing more of our efforts. But we have no wish to impose on India or force India to do what it doesn't want to do. We don't have the capability. What we want to do is to arrive at an agreement on how far we can go.