Home  »  Magazine  »  National  » Interviews  » Interview »  "We Can't Have Two PMs, Two Constitutions, But Talks With The Nagas Are Still Going On" 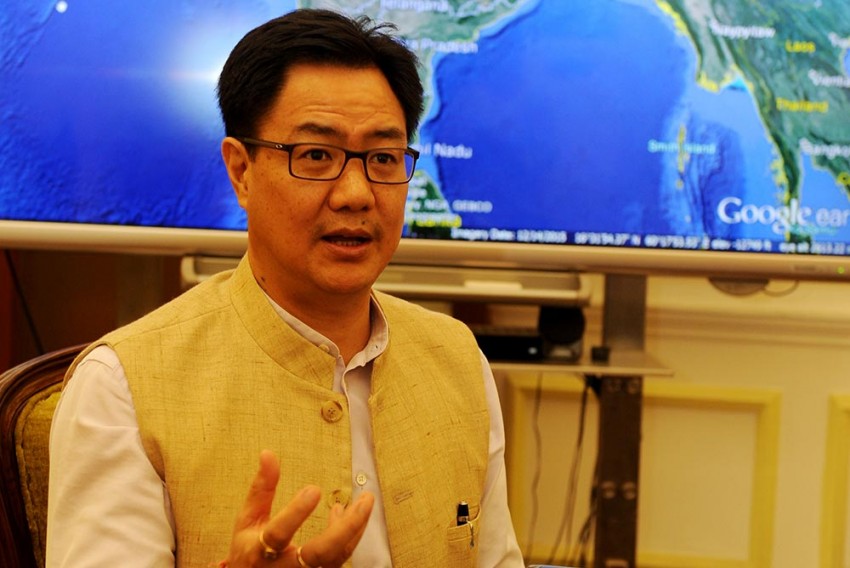 Photograph by Tribhuvan Tiwari
Bula Devi July 01, 2016 00:00 IST "We Can't Have Two PMs, Two Constitutions, But Talks With The Nagas Are Still Going On" 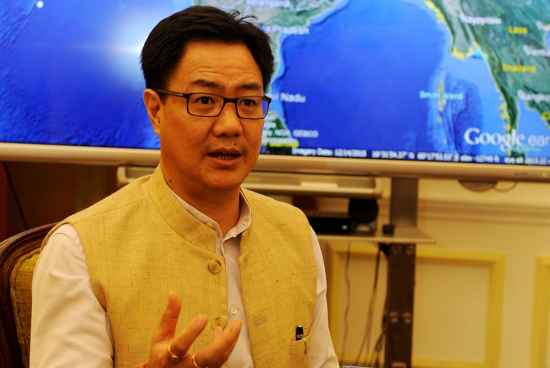 It was after some 80 rounds of ‘talks’ with the National Socialist Council of Nagaland (IM) spread over 16 years that the Centre signed, last August, what it called a “framework agreement” and the NSCN(IM) an “accord”. Therefore, when R.H. Raising, the kilo kilonser, or ‘home minister’, of the NSCN(IM), claimed last week that New Delhi had agreed to allow the Nagas to have a separate flag and passport, it caused quite a flutter before the government issued a den­ial. In an interview with Bula Devi, Union minister of state for home Kiren Rijiju, however, refuses to close the option, and says talks are still on. Excerpts:

How do you react to the NSCN(IM) cla­im­ing that the Centre has accepted its longstanding demand for a separate flag and passport for Nagas?

This report of a separate flag and passport being agreed upon by the government of India is false because talks are still on. Talks with the NSCN(IM) are based on the framework agreement. There are many points of convergence, a few of div­e­rgence; the differences I cannot spell out now. As a minister, I have the responsibility to see that talks do not fail.

Are you ruling out concessions on those two demands?

While talks are still on, how can we say the government has agreed on separate flag and separate passport for the Nagas? We have to wait for the talks to be over.

Is the demand for a separate flag feasible or reasonable?

“While talks are still on, how can we say the govt has agreed on a separate flag and separate passport for the Nagas? Let the talks get over.”

Our party’s principal stand is talks have to be within the ambit of the Constitution of India and our slogan has been ‘Ek desh mein do vidhan, do pradhan aur do nishan nahi chalega (In one country, there cannot be two constitutions, two heads and two flags)’. That was Shyama Prasad Mukherjee’s slogan and its spirit is being maintained by us. So no two Constitutions, no two heads (or PMs), no two flags. But on the Naga issue, I cannot comment because talks are still on.

It is alleged that while NSCN(IM) has been negotiating with the Centre, it had also tried to procure weapons?

We have to ensure that the party involved in talks must adhere to the conditions. While having talks they cannot enhance their military capability.

Concerns have also been expressed about private companies being allowed to exp­lore and mine oil in Nagaland. What is the government’s position?

There is serious concern from the Nagaland government side. I also feel that while the Centre has to do whatever is needed in nat­ional interest, concerns expressed by the state shouldn’t be brushed aside. Actually, the petroleum ministry is still in discussion with the Nagaland government and I think a solution will be arrived soon.

Was it right on the part of the state government to ask ONGC to leave?

I can’t say right or wrong. But Nagaland enjoys certain privileges due to certain provisions in the Constitution and that is why they have raised the issue. Now it is a question of coming to an understanding.

External affairs minister Sushma Swaraj had announced in Bangladesh relaxed visa for Bangladeshi citizens below 13 years of age and those above 65 years. Are we ser­ious about implementing it?

The MEA had made a commitment to the Bangladesh government and diplomatic commitments are serious and binding in a way. But we have certain internal issues; the proposal is with the ministry and I have also made certain observations.

“Nagaland has certain privileges owing to some Constitutional provisions. That is why it has raised the ONGC issue. We must reach an understanding."

The security angle is attached to it. Besides, it’s a sensitive issue for India, especially in the Northeast. We are dealing with it.

Was it an off-the-cuff offer from Sushma?

No, the foreign minister had made the announcement after proper negotiations. In fact, the MEA had sought inputs from other ministries, including the MHA. She didn’t say it out of the blue.

In Arunachal Pradesh, more than one hundred memorandums of underst­anding are said to have been signed for hydel power projects and dams...

Of all the hydro power projects that were signed between 2003 and 2008 (and some more were signed later), there is no problem with the smaller ones. But I have always held that for bigger power projects (say 3,000 MW and above), there should have been a better understanding of the ecological balance, environment assessments and local sentiments.

What is the government going to do now, for the MoUs have already been signed?

That’s what, MoUs were signed without observing proper procedure. What can be done now? If we cancel those MoUs, the parties involved will go for litigation bec­ause they have already paid upfront to the state government and incurred substantial cost. The problem has been created by the Congress government.