We Cannot Have It Both Ways

Either it was a well-planned crime or the clumsy success of the most inept bunch of terrorists. It can't be both. 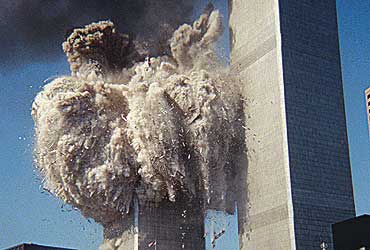 outlookindia.com
-0001-11-30T00:00:00+05:53
I have been at "Ground Zero". I have spoken with those who survived, with those who escaped and with the families of those who did not. It is an appalling sight. They are pitiful stories. But we cannot have it both ways.

Either Osama bin Laden and his followers committed a meticulously-planned and cunningly-executed crime with horrific coordination, as the Bush administration says. Or it was the clumsy success of the most indiscreet, garrulous and inept bunch of terrorists in history. It cannot be both.

The evidence for the former thesis is clear. Four large jet aircraft, each heavily laden with fuel for a cross-country flight, were hijacked at almost the same time from three international airports in three states. The aircraft, once hijacked, were flown abruptly off-course, but level, under control and on a clear flight path. Three were crashed with deadly precision into three buildings in two cities. The fourth went into the ground, apparently due to a cockpit fight between passengers and the hijackers.

This is very sophisticated stuff, the work of experts. Insane experts, but experts nonetheless.

Now consider the other, post-attack, scenario. The fbi immediately went galloping off in all directions to round up the usual suspects. Not having had a hint of any planned attack before the event, the fbi, in 72 hours, had identified 18 hijackers, by name. There are just a couple of small problems: several of those named were not on board, including a Saudia pilot who is safe and well in Tunisia. Some of those aboard may not have been hijackers; but they had Muslim names.

Who are these people? Three were pilots, trained on twin-engine propeller aircraft in a few months but able to fly large, heavy, powerful jets on a precise course at several times the fastest speed they'd ever flown, in a cockpit configuration they'd never experienced.

They trained, we are told, at various schools in Florida. Why train in the US and draw attention? No explanation. They also used a Microsoft flight simulation program. Air-India, you've wasted tens of thousands of dollars sending fighter jocks to Boeing. They should have gone across Seattle to Microsoft!

Three weeks before the attacks, one fellow went to a flight simulator operator in Minneapolis, offered him a wad of cash and informed him that he only wanted to learn to "fly horizontally"; he didn't care about take-offs and landings. He was arrested and held but no one thought to ask him about his peculiar choice of flying lesson!

The lynchpin of the plot required 18 men to get knives and box-cutters through lax airport security, 10 of them at a single airport. This, although had even one been caught, might have put the whole intricate plot in jeopardy. Careful planning!

The supposed ringleader of the hijackers, one Mohammad Atta, was, by his own father's admission, a mediocre graduate of an Egyptian architecture school. Great leader! Two of the hijackers, driving into Logan airport in Boston that morning, almost hit another car and came close to a fistfight with the other driver. Very discreet!

The supposed holy warriors of a fanatic Muslim, two terrorists got drunk in a Florida bar before the attacks and loudly celebrated the coming bloodshed in America. Others treated themselves to $300 lap dances from bare-breasted women. Devout Muslims!

It is possible that the men the fbi claims were the hijackers were indeed responsible.But I find it difficult to believe they were more than "muscle"—the bully boys needed to subdue and intimidate the passengers and force the airline pilots to turn over the aircraft, as they had been trained to do. The planning and the real work of the attack were done by others.

It is possible bin Laden was the mastermind behind the biggest act of terrorism in history. But why does a man who freely admits to his hatred for America, and tells Muslims that it is their holy duty to kill Americans, deny any role in the attacks, even while applauding them? He cannot believe his denial will keep President Bush from attempting retribution. And he must know also that he would be famous—and infamous—the world over if he claimed responsibility. Still, he continues to deny any involvement.

It is also possible the Bush administration will shortly provide coherent and damning evidence of bin Laden's involvement, as promised. But I doubt that such proof will be persuasive. If the administration had irrefutable—or even convincing—evidence of such involvement, it would, long ago, have produced it for all the world to see.

Bush tabbed bin Laden "the prime suspect" almost immediately after the attacks. That may prove the case but before his administration begins its own jehad, it should consider who else has motive to hate America and to commit such a diabolical crime. Who else has qualified pilots willing to die in such attacks. And who else has the technical knowledge of construction required to bring down buildings designed to withstand quakes and hurricanes. These abilities can, of course, be purchased—even the willingness to die—but this hate-filled man cowering in his cave in a dying country doesn't come easily to mind as a criminal genius.

In 25 years of journalism, I have learned one key lesson. When an explanation makes no sense, one of two things is true: there is a key piece of information unavailable. Or it really makes no sense. We cannot have it both ways.