"We Can Only Get Better From Here" 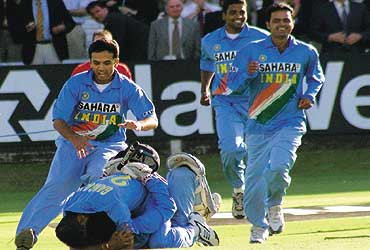 outlookindia.com
-0001-11-30T00:00:00+0553
What's been the turning point for India?
The squaring of the series against England at home. It made us realise we needed to bat deep. We spent a lot of time trying to work out the combinations, seeing how best we can balance the team.

Do you think this is the World Cup team?
Six months is a lifetime in a cricketer's career. I'd rather not put pressure by straightaway suggesting India is a Cup favourite. But we haven't lost a series this year. That is comforting. The boys are settling in nicely in their positions. But a lot still needs to be done. Hopefully, we will only get better.

Was it difficult to convince Tendulkar and Dravid to adapt to their new roles?
Not really. All of us have outstanding records but we realise we need to win for these records to stand out. I'd been stressing that we needed a wicketkeeper who can bat. We don't have an Adam Gilchrist or a Mark Boucher. If a batsman can do it, nothing like it, so it came down to Rahul. With Tendulkar coming in the middle, we could offset any early stutter or if an innings needed a push in the middle overs.

Virender Sehwag is even more destructive than Tendulkar was as opener.
Veeru is an extremely talented, daring batsman. But he keeps getting out at wrong times. As a one-day opener, you must learn to bat through.

Who's your favourite fast bowler in the team?
All three are different. Nehra's good in his first spell and Zaheer and Agarkar in their final spells. But Khan's bowled nowhere near his best on the tour so far.

The fitness of the boys is a bit of a shocker. Do you still manage fry-ups behind Le Roux's back?
I do sometimes, frankly. But, it's in our interest if we pay heed to his methods.

Do you think we have the right balance in batting and bowling now?
We bat deep down. Each one of the seven is capable of winning a game. Bowling could get better but the three pacemen have worked brilliantly in tandem. Tinu Yohannan is very promising. We are winning matches also because our fast bowlers are doing well. But yes, it can get better.

Do you plan to stay with Rahul Dravid as the wicketkeeper?
Everyone has seen how much difference it has made in the team. Dravid is a quality batsman, his wicketkeeping's been a revelation. He's kept as well as anyone I've seen.

Do you think the team is good enough to handle bouncy South African pitches?
You find hard pitches in India, you find bouncy ones in England. Generalising doesn't make sense. We're talking about one-day cricket here. It is not as if bowlers' scruff marks and much use will make pitches crumble from the third day onwards. It's one-day cricket. And pitches generally suit batsmen.

Do you miss Tendulkar as your opening partner?
We don't think of the team in individual components. It is the collective contribution and result which counts. We feel happier when the team wins rather than if we knock up some individual records. If it's good for the team, it's good for everyone.

Why have you backed the youngsters?
I've played international cricket for the past few years. I know quality when I see it. I have backed them because they are talented and would be good for my team. Before I went to Kenya for the mini-World Cup two years ago, I had spoken about Yuvraj and Zaheer even before we had played the first match. Harbhajan is a champion and he has proved it. Sehwag and Nehra are fine talents.