'We Can Easily Catch Up With China' 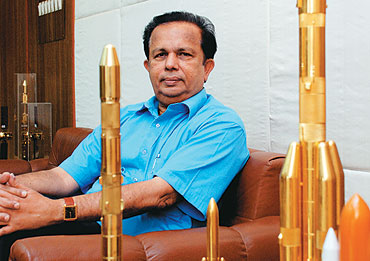 Srikanth Kolari
Sugata Srinivasaraju October 27, 2008 00:00 IST 'We Can Easily Catch Up With China'

What does the moon mission mean to ISRO and India? What message does it send out to the world?

First of all, it is a major technology challenge. So far we have sent our satellites to a distance of nearly 36,000 kms and put them in a geo-stationary orbit. But, for the first time we are travelling 400,000 kms. To reach near the moon and put the satellite in a suitable orbit around it, poses a lot of technology challenge in terms of tracking, orbit determination, navigation, guidance and so on. Apart from this, the mission is unique because we are trying to map the entire lunar surface in terms of its terrain features and mineralogical content. We hope to provide a lot of inputs to the scientific community on the various aspects of the moon, on its origin and then in turn to throw light on the origin of the earth itself.

The moon mission is happening around the same time as the nuclear deal, the economy is also vibrant? Are there linkages between the three? Has India truly and finally arrived?

We have established ourselves in both atomic energy and space. Today we are treated in par by the developed nations in these areas. It is time to give a major thrust to the future developments in this area and maintain a leadership position. Our economic growth and vibrancy is going to help us in this. We are spending hardly 0.5 per cent of our national budget on our scientific programmes, if this could be increased it will help us emerge as world leaders in many other areas of science and technology too. The overall national income is also going up and this will definitely help us in many ways.

ISRO has been a great and transparent institution. It has delivered one success after another. Does our political establishment appreciate this?

At all times, all governments have been very supportive of the space programme for chiefly two reasons: Firstly because it is a hi-tech area. Secondly, we are able to provide a wide range of services to the country. Take for instance agriculture resource management or water resource management or for that matter natural resource management in general -- the quality of inputs that has been coming from our space programme has tremendously increased the productivity and income of large sections of our people. Again, the communication and connectivity that we are providing through our satellites across the length and breadth of the country meets the national needs. Successive governments have been supportive of our work and the fact that in the last few years we have been getting roughly a 20-25 per cent increase in our annual budget is indicative of that support. Most of our budget goes towards meeting national priority needs. We work in a very democratic fashion. Our projects go through an elaborate process of consultation with various government departments and scientists. We have also learnt to deliver our services on time and in a cost effective manner. The fact that more or less the successive prime ministers of India have held the space portfolio has helped us in removing procedural hurdles.

Does Chandrayaan come at an inflection point in ISRO's life? A sort of midlife crisis? Is that why you are moving from societal application to space exploration?

We could be at an inflection point, but what we are spending on Chandrayaan is hardly only three per cent of our budget over the last five years. It is a small fraction. But, the amount of technological advancement we will see as a result of this and the national pride that the mission brings is tremendous. Also, we have to lay the foundation for the future. The exploration of planets whether it is the moon or mars, the exploration of the solar system or the galaxies have become very interesting topics for the scientific community. To create a scientific temperament in the nation and create a new generation of space scientists missions like Chandrayaan are needed. We plan to set aside aside 10-15 per cent of our budgets toward advanced R&D both in space science and space technologies. We are actually not moving away from societal application, but only further expanding it. You never know, what we find today may be of use for the next generation. Suppose we are able to find helium three on the moon, and we can commercially exploit that, it will be of great use to our atomic programme.

How do you handle criticism from a section of the people that a poor nation like India shouldn't be wasting money on projects like Chandrayaan?

We have faced this question in the early phase of the programme. We are convinced that we are doing more service to the society than the money spent on the programme. But to doubly assure ourselves, we asked a school of economics in Chennai a couple of years back to make an assessment. The report they submitted was really mind-boggling. They found that what we have given back to the society in terms of products and services is something like one and half times more than the cumulative investment made on the entire space programme. Leave alone the infrastructure, the technology, the human resources and the various laboratories we have developed, if we add all that it is certainly more than five times spent on the programme.

Do you think this is an Asian century? China, Japan and now India are all into lunar missions?

I think it is correct in a way. Though these countries are underdeveloped in some areas they have given enough importance to scientific development. What you are seeing in terms of space exploration is a culmination of that. China and Japan have not only sent lunar missions but also have very ambitious plans for planetary exploration.

How do you compare India with China?

Compared to China we are better off in many areas. For example our communication satellites are world class. Chinese still depend on some foreign companies to supply some components. On launchers, we have very advanced capability. As far as manned-mission is concerned we are lagging behind, but that was a conscious decision on our part. Since it involves a lot of funds, in the initial phase of the moon programme we have not given thrust to that area. But given the funds and necessary approvals we can easily catch up with our neighbour in this area.

In the global space industry there was a lean period as far as the moon was concerned, nothing happened for decades, but why the sudden interest now?

For two reasons. One is the prospects of minerals which could be exploited and the second is that if you want to get into inter-planetary travel or go beyond the solar system, we need an intermediary base. Instead of having an artificial system like a space station, if we have a base in moon it may help us. That is the kind of future vision that space agencies are developing.

When will India put a man on moon?

We have a dream to put a man on moon with our own vehicle system by 2015.

About Mars we have given some thought. We can have a spacecraft going to the planet by 2012. But we are still looking for good scientific ideas on inter-planetary missions.

Personally for you what is it that is very significant about this moon mission?

Basically the technical challenges. We decided to put the deep space tracking network on our own. We developed it indigenously through ECIL and BARC. It was a major decision and I am happy that we now have a really world class facility.

You were travelling abroad with the PM recently, what were people in other countries asking you about the moon mission?

People are very much looking forward to the success of this mission for different reasons. First of all, a country like India is doing this. Secondly, it is seen as a fine example of international co-operation in space exploration. We have instruments from the US and Europe flying on board along with our instruments. Our scientists and scientists from these two continents are working together. No other country has had technological co-operation to the extent that we have had in the context of our moon mission.

Is the moon mission also about attracting young talent to ISRO?

Young, bright scientists can be attracted only by technology challenges. Money is a factor that counts but more than that it is technology challenges that are important. We have full clarity about what ISRO should be doing for the next 20 years. There are a lot of fascinating things that we intent to pursue. Our vision plan will put forward a big bouquet of technology challenges and these challenges I hope will attract young talent. It is very difficult to get young talent, but the fact that attrition rate at ISRO is less than 10 per cent shows that money is not the only factor for people who have joined us and are wanting to join us. In IT industries where they pay hefty packets, they talk of an attrition rate of 25 to 30 per cent. I don't mean to say that scientists need not be remunerated well. We have taken up these issues with the government and we are very positive about getting a better package. To train young scientists we have also started the Indian Institute of Space Technology, which is a unique institution in the world. We take in youngsters at plus two level and after four years of education they are guaranteed a job in ISRO. This specialised education will bring the best talent to work with us in the future.

An edited version of this appears in print