We Can, But Don't

Where we lack is in inducting a laser-designated counter-terrorist strike along with a dozen other capabilities. 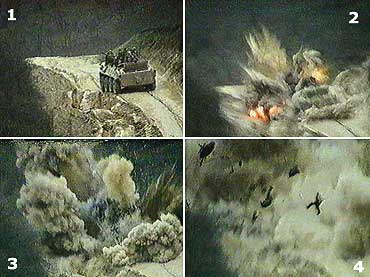 outlookindia.com
-0001-11-30T00:00:00+0553
The technology that is shown here in the photographs is 20 years old. We don't have it. It would be the easiest thing to say, that's because we are a poor country, but that would be a lie. What is shown in the photographs is joint warfare at its best. We have only the 1945 version when air force officers, also called forward air controllers (FAC), move ahead of the army and call in a strike ahead of the advancing troops. That concept believed in a 'front' line, but there are hardly any more fronts. The absence of this updated system is not just symbolic of an equipment deficiency, but a failure of doctrine, of joint warfare concepts; and because there are supposed to be institutions that prevent doctrines from becoming obsolete, thus the failure of those institutions. This gizmo is not just a fancy weapon, but is at the heart of what we Indians called 'hot pursuit' for many years. It is important because we had 12 years to gear up for hot pursuit and the absence of equipment such as this is an indication that we got some very serious issues all wrong.

The Americans use special forces as FACs. We could too, and if we did, we could have had them roaming behind enemy lines which air force FACs cannot do. Could they have roamed through PoK? They certainly could, if American and British special forces could roam Afghanistan. So, what we needed was a doctrine of army special forces operating in complete coordination with air force fighters. Army doctrine is worked out at the college of combat, Mhow, and at the Army Training Command, Simla. The air force doctrine is worked out at the Air Warfare School in Secunderabad and the Fighter Warfare Development Station in Jamnagar and the twain shall not meet; Catch 22. Perhaps the only way out would have been the navy working this thing through, since they have both fighter aircraft and commandos, but that didn't happen either.

At the micro level, each service is ready for war—and we and the Pakistanis have been told so. But the individual-service war is obviously not the country's war. The country's war required that RAW find out where the terrorist training camps are or where Dawood Ibrahim or Azhar Masood live and somebody coordinates their abduction or elimination. This is a different war with different weapons systems. The ISI has been running a self-financing terrorist organisation in Nepal for 10 years. Is the might of the Indian state insufficient to strike terror into the ISI in a friendly neighbouring state? Only if the organisation, doctrine and relevant sensors and weapons have not been put in place. The laser-designated counter-terrorist strike is not the magic bullet, but the failure to induct it along with a dozen other capabilities is symptomatic of an alarming doctrinal, tactical and technological obsolescence.

Weapons and sensor acquisitions in each service are driven by about six to eight officers who are in the fast track. They have power to do great good or commit monumental blunders. To help them avoid the blunders there are thinking institutions that provide calculated inputs. So, something has seriously gone wrong with the whole edifice. It's painful to say so; eventually it may be difficult to stand up to one's enemies, but it's necessary to stand up to one's friends when they are in the wrong. As Charles de Gaulle said: "What policy can hope to succeed if the country's arms are brought low? Of what use is strategic planning if the means to carry it out are not forthcoming?" Who is going to start the doctrinal clean-up?