"We Are Looking Closely At Bangladesh"

The US state department's co-ordinator for counter-terrorism ducked tough questions on Pakistan—saying these were political, and consequently beyond his brief... 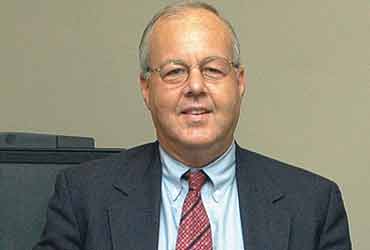 outlookindia.com
-0001-11-30T00:00:00+0553
For a person who worked for 28 long years in the shadowy world of the CIA's Directorate of Operations, Ambassador J. Cofer Black is cut out to handle the job he holds in the State Department: Co-ordinator for Counter-terrorism. Here in Delhi last week to attend the sixth meeting of the Indo-US Joint Working Group on Counter-terrorism, Black took time off to meet V. Sudarshan. Guarded and circumspect, he ducked tough questions on Pakistan—saying these were political, and consequently beyond his brief. Yet Black conveyed India's inability to supply adequate information on incidents of cross-border terrorism to the US. Once the interview was over, the ambassador promptly relaxed and posed for our lensman. Excerpts from the interview:

What's the American assessment of terrorism in Bangladesh?
Bangladesh's situation is of great interest to us. The United States is opposed to all terrorists. We approach terrorism as a global issue. On my last trip, I got some good insights from the Indian team on what is going on in Bangladesh. We're very mindful that countries that have the will to resist terrorism are supportive. We are looking at Bangladesh more closely. I'm personally interested in having an accurate picture. We plan to look into—and if correct—confirm the Indian view. Ours is a very interested position. We need to determine exactly the threat of terrorists not only to Bangladesh but also the potential utilisation of Bangladesh as a platform to project terrorism internationally.

India keeps saying that terrorists camps in Bangladesh are inimical to the stability of the region.
Right.

You have been quoted saying, "In my dealings with the Indian government I ask them and challenge them to do a better job of representing the issue (cross-border terrorism) as they see it and we look forward to working with them and try to get a better understanding. There is great scope for improvement in that area." Can you identify the areas specifically?
The quote has to be put in context. And the context is the criteria used by the US in its publication, The Patterns of Global Terrorism. It specifically identifies terrorist instances; it has specific criteria according to the US perspective. A group called Interagency Review Board adjudicates reviews and adjudicates terrorist instances. So for it to be an international terrorist incident, it must either involve international personnel in a country, or involve cross-border action or must involve a third country. It was on that point that there was not necessarily agreement.

You have been quoted elsewhere saying, "I look forward to their (India) effectively communicating the reality of the situation as they see it." Can you elaborate?
The reality of the situation is based on actual information, based on excruciating, detailed intelligence information. Now anecdotes, suspicions in all instances, whether it is the US or any country including India, needs to be fleshed out.

So it has not been adequately fleshed out by the Indians?
It's very difficult to flesh everything out. But for the purposes of information contained or reported in the Patterns of Global Terrorism, any information has to go through the adjudication process and the Interagency Review Board. They make a determination; so to qualify you have to meet all these criteria.

Do you think Pakistan President Pervez Musharraf has done enough to prevent cross-border terrorism to India?
The Pakistan government under President Musharraf has made significant progress in the identification and engagement of terrorist targets. Over 550 Al Qaeda personnel have been arrested, detained or killed. Not too many other countries can rival that accomplishment. The fact is that we all can do more. And the President of the United States is urging everyone to do as much as possible. I'm talking about an absolute we-can-all-do-more.

Is there anything Musharraf can do specifically more to assuage Indian concerns?
That is essentially a political issue. It's removed from the area of counter-terrorism.

India's army chief says infiltration is up, almost double since May. Do you have a view on this?
I have not met with the army chief so I can't comment.

Last week Musharraf declared that jehadi groups operating in PoK would've to pack up if the government finds a solution. It seems to imply that they are free to operate till there is a solution. How do you view this?
I do counter-terrorism: identify terrorists, resolve, arrest, detain them. I don't have a personal view on this.

You hand out certificates saying how well Musharraf has handled Al Qaeda, but we don't get to hear the same on the Taliban. Why is that?
I don't know what you've heard. So, it'll be awkward for me to comment.

To what extent is the US sharing intelligence with India regarding Kashmiri jehadis?
I am not going to comment on intelligence matters.

But Indians are sharing a lot of information on the Lashkar-e-Toiba (LeT), and what its founder Prof Hafiz Saeed is doing...
I don't know what your belief is based upon. That's why I believe intelligence services should interact behind closed doors. We've productive meetings with Indian intelligence agencies.

Have you looked at possible linkages between the Kahuta Research Laboratory and Al Qaeda?
I would have to research that one.

What has been the achievement of bilateral cooperation on terrorism between the US and India?
We've what we call a joint working group. We take great pleasure in being able to say that it is the oldest and most long-standing joint working group on counter-terrorism we have with any country.

It was set up in 2000. But you didn't meet for almost a year.
Well, that was the year when the United States was under attack. The United States was under assault by terrorists. There was an aviation threat. As a result, I was unable to travel. The relationship between us and the Indians is very good and close. It has been validated by both sides. Things can always improve. Both sides are working on that. We have proposed various programmes to support our Indian friends. And they have proposed areas in which they can offer cooperation to the United States, the different ways of enhancing exchange of information and cooperation. I have had some very good meetings here. I go home well pleased. The important thing is that this relationship is on solid footing.

There are reports that mainstream political groups in Pakistan like the Jamaat-e-Islami have been extending support and shelter to terrorists. How does the US government view this?
Again, I'll have to go back to the basics: our business is to counter terrorism.