Prehistoric sites in Tamil Nadu battle nature, but granite quarries may yet kill them 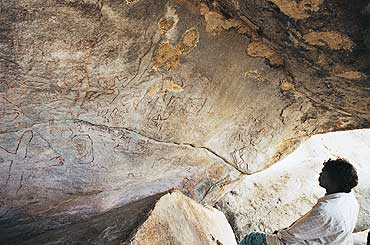 outlookindia.com
-0001-11-30T00:00:00+0553
Imagine a time when humans had no idea of being Tamil, being Indian—of being one and not the other. A time when there was no differential hierarchy of race, caste, language, gender, ethnicity or nationality. A time when a man in Alampadi, three hours from today's Chennai, and a woman in Arnhem Land, Australia, wouldn't have known of each other's existence, and yet would have been driven to paint similarly on similar surfaces using similar red and white ochre. When figures of thought, not of speech, were used for recording ideas. Prehistoric rock art, a term that in India first brings to mind the cluster of 200 caves in Bhimbetka, Madhya Pradesh, transports us to a time when human beings began constructing 'reality'; the beginnings of modern human cognition, and of iconicity—what an archaeologist terms the property of an object to resemble and represent another object.

India, along with South Africa and Australia, possesses one of the three largest concentrations of rock art. It manifests itself in two forms—petroglyphs (figures/ motifs created by engraving, abrading, hammering, boring or etching on a rock surface) and paintings (where a wet paint or dry pigment is applied). In India, the latter is found in abundance. Though most rock art sites in India are believed to be found in central India, there has been a spate of discoveries in the peninsular region as well in the last two decades. But unlike Bhimbetka, a Unesco world heritage-nominated site, rock art specialists have little or no idea about the more than 50 sites in Tamil Nadu. And some of the best sites here are under threat from granite quarries blasting away portions of the world's prehistory.

South of the Vindhyas, Dindigul, Tirunelveli, Dharmapuri, Villupuram and the western ghat areas have large deposits of rock painting sites. But let's focus on Settavarai, Alampadi and Keelvalai in Villupuram. At Settavarai, after climbing steep rocks for 30 minutes, you confront a 20x15 ft canvas—at the centre, demanding all the attention, is a well-crafted figure of what could have been a deer or a luscious wild goat depicted with all its four legs, two ears, horns and a deft tail. The border is executed in red ochre, probably a pigment extracted from haematite red (containing iron oxide) and mixed with animal or human fat/blood, and the infill is in white.

G.Chandrasekaran, better known as Chandru, professor at Chennai's Government College of Fine Arts, sees the hand of a master artist here. He reflects: "Unlike the other images on the same rock canvas, the deer-goat is executed with finesse and style by an artist who was sure of his/her lines and strokes." Other images that litter the canvas are variations of hand-prints (as in Bhimbetka) where the image of one hand placed on the rock is outlined, and of fish with their innards, and other figures. Settavarai, a megalithic site, could be placed anywhere between 3,000 BC and 500 BC, in a cusp between the prehistoric and protohistoric periods. However, rock art specialists warn us against attempts at specifically dating sites. Even scholars using the best radiocarbon and direct-dating methods have had to retract their 'scientific' claims on rock art.

At Alampadi, a half-hour away, huge reptilian figures dominate the breadth of the curving rock surface; and as you crawl and lay on your back to study the graffito, you realise that the nameless prehistoric artist must have lain in a similar, inconvenient position to execute the work. Think Michelangelo. Think Sistine Chapel. A layer beneath the thick red ochre of the spread-eagled pangolin-like figures are the X-ray images of cows/bulls in lighter shades of red. X-ray paintings, found in Australia and Europe as well, are so called because the images show the innards of an animal—digestive tract, lungs and skeletal details.Rock art experts don't read cultural connections between all of the world's art traditions that have used such conventions, but they see them as being independently reinvented. According to Chandru, the Alampadi site indicates that the rock shelter was used by different artists over a period of time. "Once a safe site was located, free from direct exposure to air, sunlight and rain, people over generations must have flocked to it to inscribe their impressions. We therefore see overlapping images."

The Alampadi collage also features a distinct human mask, besides fungus-like growth that has eaten into one end of the canvas. Drawing out attention away from such natural vandalism, art historian K.T. Gandhirajan says: "At points where there are cracks on the rock, the artist has tried to cover it up with hair-like lines. It's as if the artist is declaring that s/he is aware of operating on a canvas that has a natural tear." These prehistoric artists clearly had an audience—if not critics—in mind.

Writing in one of the most well-documented works on the subject, Indian Rock Art and its Global Context, Indian and Australian experts Kalyan Kumar Chakravarty and Robert G. Bednarik warn us against interpreting the meaning and significance of rock paintings. Our 'identifications', ways of understanding what a particular piece of rock art means can never be the same as theirs, millennia away. We have developed and established the culture of labelling, captioning (as, ironically, with photographs of rock art that appear with this article) but prehistoric pictures don't come with neat labels telling us whether what we see at Alampadi is a pangolin or a giant mountain lizard, or if what we see at Settavarai is a goat or a deer. They don't tell us anything in as many words primarily because there were no words then—there was no script, hence their pre-historicity.

Another site, at Keelvalai, probably of a latter period than Settavarai and Alampadi, where faded red ochre images—boating scenes, warriors astride horses, several symbols, including what we identify as swastika—come alive only when some water is sprinkled on the granite surface. "Sometimes rock-art tends to be self-effacing," says Chandru wryly.

Sadly, though some of these sites have been known to archaeologists for more than two decades, there's been almost no effort at preservation, documentation or raising awareness. On the contrary, granite quarrying is rampant at some sites. The state archaeology department has erected signboards in Tamil dating the Keelvalai cluster to at least 1,000 BC. But within metres, amid dynamite detonations, poorly-paid workers chip away at the rocks as lorries cart away history. Some rock shelters have been fenced by the government, despite which we see contemporary political graffiti—aiadmk's two-leaves symbol—literally marking our indifference to a lost time.

Says Gandhirajan: "The issue here is not of Tamil culture and heritage. Rock art belongs to all of humanity. There are some 20 million rock-art images in over 120 countries. What we have here in Tamil Nadu is part of an international heritage." Robert Bednarik, president of International Federation of Rock Art Organisations (IFRAO), rubbishes the view that India cannot afford a budget for rock art preservation: "Bolivia, economically worse off than India, has better rock art protection practices. When India can afford nuclear weapons, lack of resources is a blatant excuse. And there is absolutely nothing elitist about wanting to preserve a nation's greatest historical asset, its patrimony."

Roots, a society formed in 2000, comprising art historians, artists and archaeologists has been involved in a campaign to raise awareness on this front.Under the supervision of Chandru, who heads Roots, professional artists have been reproducing some of the rock art in their original dimensions and are also involved in raising awareness among local people. Chandru and his team believe there could be hundreds of rock art sites in Tamil Nadu to be discovered, documented and preserved. Concurs Bednarik: "India's rock art corpus is absolutely huge, and many more new finds will be made. It will take many more years to record this great wealth."

Meanwhile, discoveries keep happening. The Roots team last week trekked the western ghats to reach a hitherto-unknown site Porivarai, at Karikkiyur in Erode district. Says Chandru: "It's by far the largest rock art canvas, 120 ft wide and 15 feet high. Images of monkeys, detailed plants, horned male deer depicted with sexual organs...it's breathtaking. Looks like there's been an accretion of images and styles for over 2,500 years." Here, the forest department has desecrated the site by marking survey numbers on the rocks. And in Keelvalai, as you read this, another dynamite would have exploded.

In Someone Else's Arms