Way To A Benign Empire 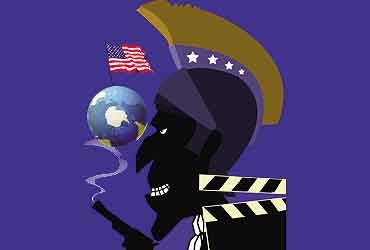 outlookindia.com
-0001-11-30T00:00:00+0553
With four new biographies and a three-hour Hollywood biopic kicking off the New Year, the legend of Alexander the Great seems more popular than ever, 2,300 years after his death. Is it coincidental that this relaunch of the world's greatest conqueror came just before the second-term inauguration of George W. Bush, the most interventionist president in the history of the world's present superpower? Even for many who are cynical about Bush rhetoric promising to make the world safe for democracy, the concept of global empire has its appeal, especially amid the current welter of failed nation-states and tinpot, nuclear rogue-regimes. The story of a man who had both the idealism and the military prowess to build the world's biggest empire seems to have a timeless universality.

Alexander's greatness is that he belongs to no one nation or tradition. I discovered him as a child growing up in Bombay, in the bedtime stories our Muslim servant told me about Iskander's exploits, especially his taming of the indomitable Bucephalus. As a Parsi, I found my loyalties divided by Alexander's defeat of the world's then dominant superpower, Achaemenid Persia, and his destruction of Persepolis. But then I warmed to his honourable treatment of the Persian royalty, adopting the mother of the defeated Darius as his own and marrying his daughter Statira. I was particularly impressed by his attempts to fuse Persian culture with Grecian values, even at the cost of alienating his Macedonian comrades.

As an adult, I was thoroughly engrossed by the brilliant Mary Renault trilogy of historical novels about Alexander. Her immense classical scholarship gave historical veracity to her reconstruction of a character whose complexity ranged from the raging of a lion to the gentleness of a lamb. And for the 1960s, she treated with amazing sensitivity the greatest homosexual love story of all time: Alexander's devotion to Hephaestion, whose untimely death drove the emperor to insanity.

I was dismayed to find few if any of these complexities in Oliver Stone's truly appalling film, which played Alexander like a Wild West hero transplanted to the Wild East. The dialogue is cringe-making, and even the battle scenes dreary and incredible, especially the one in Punjab, where the wily natives perform the impossible by charging at the Macedonian cavalry through an improbably thick, tropical jungle with a squadron of war elephants.

Stone's Irish Alexander sounds and even looks a bit like today's world ruler, George Bush; and anachronistic echoes abound in his capture of Babylon (now a US military base in Iraq) and his hunting down of the fugitive Darius, who meets his end looking unmistakably like a bedraggled, captured Saddam. If there is a political message here for America's President or his female Aristotle, Condoleezza Rice, it's as hard to unpack as any Delphic oracle. For Alexander, half-crazed with grief, alcohol and exhaustion, dies on the eve of an invasion of Arabia, leaving his empire a prey to rival warlords. Perhaps there's a warning here about the risks of imperial overstretch. If so, one can't help wonder why Stone agreed to re-cut the DVD to placate US sensitivities, in particular to tone down the bisexuality which makes Alexander such an unpalatable hero for Middle America.

Following the other Hollywood blockbuster, Troy, also about conquest and civilisational clash, Alexander reflects a growing, insatiable popular appetite for imperial narrative, not surprising in a world that's more globalised, yet farther than ever from effective global governance. Over the past two years, British TV has been replete with documentaries about the Greek, Roman and British empires, emphasising their shared values of individual freedom, trade and the rule of law. And the historical has become increasingly political, thanks to the revisionist historian Niall Ferguson, who combines a talent for polemics with telegenic good looks.

Ferguson presented a successful TV series, Empire: How Britain Made the Modern World, in which he argued that the Raj, far from draining India's wealth, introduced her to capitalism and the new opportunities of globalisation. He's an unabashed advocate of enlightened "liberal imperialism" to promote and protect global markets and enforce international law and human rights. His latest book Colossus argues that the US is the only power with the economic and military muscle to run a successful empire; and he pleads for it to emulate the British Raj and honour its imperial responsibilities, instead of ruling by stealth as an empire in denial. But the problem, as he too concedes, is that America is not up to the intellectual and administrative challenge.

To us former subjects of empire, it seems obvious that if imperium is to reinvent itself as a political form for the 21st century, it will need to shed its 19th century baggage of exploitation. And that applies as much to the would-be regional empires of resurgent Asian giants like China and India. We too had our native imperialism before the West took over: and many of our smaller and weaker neighbours feel every bit as threatened by us today as they were by British or Japanese imperialism a century ago.

The ideal of empire, in the sense of cosmopolitan values and global governance, seems as compelling and elusive for us as it was for Alexander. But if empire is to survive and submerge the nation-state, it'll have to reinvent itself as a union of mutual benefit for the strong and weak, and that might look more like the present European Union than the British Raj. If that happens, who knows: recognised imperial mandates and protectorates might be more accountable and benevolent than today's undercover imperialism.

(Zareer Masani is the biographer of Indira Gandhi.)

Fuel For The Lantern