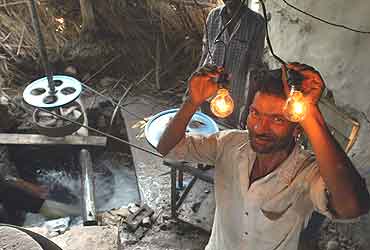 outlookindia.com
-0001-11-30T00:00:00+0553
In Sahaspur, a tiny hamlet of five families about 30 km from Dehradun, the steady electric glow of tungsten is causing inhabitants to stay up all night. It may well be excitement, but it's understandable. So recent a phenomenon is electricity in this village that the naked bulbs don't have switches yet. Also, tree trunks double up as electricity poles and there are only zero-watt night bulbs to cast kitchens and verandahs in their inadequate, watery light. The power, surprisingly, does not come courtesy the Uttaranchal State Electricity Board. The villagers generate it themselves using a gharat or a water mill. Even as the village sleeps, the mechanical energy of rivers and mountain streams is being converted into electrical energy.

Thanks to upgraded technology and a little help from NGO Himalayan Environmental Studies and Conservation Organisation (HESCO), the water mill is suddenly working a lot faster and generates all of 2 KW of electricity a day in the process. "With electric lights in our homes, our lives are changing. But it will take a little getting used to," grins Jaipal, who operates the water mill and provides free electricity to the villagers.

Sahaspur is not alone in this electricity revolution. In fact, there is a lot of churning going on in the hills of Uttaranchal, as village after village upgrades its old water mills and learns to generate its own electricity. So far, more than 30 villages have been electrified using upgraded water mills. Now, the Indian army is employing the technology to electrify villages along the LoC where water mills exist.

"There are about two lakh water mills in the mountainous regions of Uttaranchal, Himachal, Jammu & Kashmir and the Northeast. Almost every village has at least one water mill," says Anil Joshi, founder of HESCO which developed the technology. These mills, traditionally used to grind grain, have been around for centuries and tap fast-moving water sources. Water channelled from such sources causes wooden turbines to rotate at reasonable speeds, thus allowing a grinding stone to grind maize, millet and other local grains into flour. According to Joshi, water mills operate on the same principle as big dams.

"With the entry of pre-packaged flour and newer, fuel-operated grinding machines into villages, water mills were abandoned because they were too slow and time-consuming," explains Manmohan Negi, a rural engineer with HESCO. Water millers, who derived their incomes from grinding grain for commercial and local needs, were forced to seek other employment. Engineers at HESCO undertook the task of upgrading water mills to make them viable once again. Wooden turbines were replaced with iron ones, and ball bearings or pulleys were introduced to increase the speed of rotation. "Our motive was to marry traditional technologies with new scientific wisdom," says Joshi.

Water mills upgraded in this way can generate between 1 KW and 7 KW of electricity. A single kilowatt (1,000 W) of electricity can light five 100 W bulbs and about three fans; with 7 KW, a small village can easily run TV sets, refrigerators, and coolers. In addition, upgraded water mills are able to grind grain five times faster, thus helping water millers increase their incomes. These new water mills can also be used for de-husking and cotton-combing, thus increasing the avenues for income generation.

Take, for instance, the case of Heera, a water miller at Donkwala village who was driven to penury two years ago. Although Donkwala's view of the sky is marred by criss-crossing electricity wires of the state electricity board, the village was never electrified until its three water mills were upgraded in 2002. Heera now earns Rs 4,500 a month by grinding produce for local merchants and villagers.His upgraded water mill generates 3 KW of power, and along with the two other water millers, they generate a maximum of 9 KW. It's enough for Donkwala's 12 families to run 12 100 W bulbs, four TV sets, a video player and several fans. 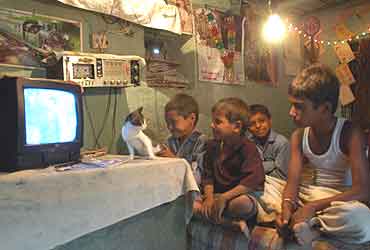 Heera recently bought a black-and-white TV and converted his mud-and-thatch hut into a one-room, pucca house with his new earnings. "I don't charge people for the electricity, but if the mill stops working, everyone has to pitch in for the repair costs," he says. Some water millers, however, do charge between Rs 10 and 20 per month for electricity, which is far cheaper than the monthly expense villagers incur on kerosene.

Upgrading water mills is not a very expensive proposition either. On an average, upgrading costs between Rs 38,000 and Rs 60,000 per water mill. This includes the cost of the iron for the new turbines, the fabrication cost and the cost of building a pucca structure around the water mill to absorb vibrations. Funds for upgrading have come from the department of science and technology, and labour is provided by the villagers. Gopal, a water miller at Lacchiwala village near Rishikesh, is into fabricating the new iron turbines and employs three people. At present, he is busy fabricating 15 iron turbines ordered by the army. "I have also been providing 3 KW of electricity to six houses in Lacchiwala," he says.

And now, the technology behind improved water mills may just be in demand for commercial purposes. Recently, an entrepreneur in Mussoorie, V.S. Rana, bought the technology, including an iron turbine, for Rs 40,000 to generate 5 KW of electricity for his leisure resort at Kempty Falls, a nearby tourist spot. "Although we had an electricity connection, the voltage fluctuated and power supply was erratic. So we decided to harness some of the water at Kempty Falls and set up a water mill to generate our own electricity," says Rana. The water has been routed through the water mill and eventually joins the falls. Although the water mill is experiencing teething trouble, it is designed to generate enough electricity to run seven 100 W lights and a refrigerator.

However, Joshi and his team are not too keen on exploring the commercial possibilities of their technological innovation. Rather, they prefer to continue upgrading water mills across the Indian mountains providing a necessity that successive governments have not been able to give to the villagers. "Our goal is community empowerment through technology that is affordable, feasible and can be repaired by those who operate it," says Joshi. With villagers lighting their own way, the hills will soon twinkle at night.