The dryness is so stark, it could almost catch fire. Are our cities hurtling towards water riots? 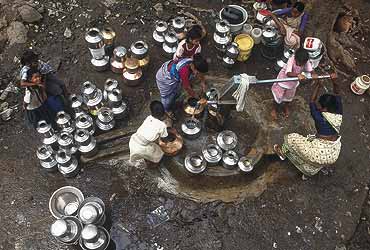 outlookindia.com
-0001-11-30T00:00:00+0553
Delhi homemaker Ritu Chawla, 35, has been been waking up everyday at half past two in the morning at her R.K Puram home for as long as she can remember. Reason: replenishing her water-tank because the government supply starts trickling only at this unearthly hour. Lakshmi, 33, a domestic help in a house in west Delhi's Sultanpuri, too gets up at 4.30 am, and walks almost a kilometre to an illegal tap connection "owned" by a local family. She and others must fill up their buckets in two hours after which they are not allowed to use the tap. In faraway Chennai, homemaker Ramya Thangavelu of Indira Nagar, Adyar, gets water all right, but it's not good enough to make tea or run it through a geyser or a washing machine. Because it is salty and hard. "My hair turns rough if I wash it with the water I get," says Thangavelu. The same groundwater meets 80 per cent of the city's water needs! In Bangalore, K. Abu Baker, a 65-year-old retiree living in the Hennur-Banaswadi area, takes a bus to the other side of the city almost everyday to visit his relatives "and request them to allow me to bathe there".

Come summer and it's the same story all over urban India: of taps drying up, or sputtering forth in the wee hours, of residents queuing up to grab their rations from tankers, of whole new colonies furiously digging deeper to tap whatever remains of the fast-receding groundwater, of an unscrupulous private water-tanker cottage industry that charges a fortune for supplies which they illegally tap. In the end, the urban water crisis is also about defiled rivers, poisoned and over-exploited aquifers, settlements swallowing ponds and lakes, inequitable distribution and inefficient management, profligate consumption, and swelling demographics.

No wonder our cities are beginning to resemble deserts. A 1997 Asian Development Bank study ranked Delhi, Mumbai and Chennai among the four worst cities in Asia in terms of water availability. Contrast Delhi and Chennai's four hours of supply every day to Beijing's 24, Kuala Lumpur's 24, and Manila's 18. (These startling figures, however, hide the inequities of water distribution. Although Delhi's official per capita water supply is about 200 litres a day, about 30 per cent of the city's 12 million people get less than 25 litres per person per day—the international norm is 150 litres.) Bangaloreans get piped water on alternate days, and Mumbai has a water shortfall of 500 million litres a day. Chennai's reservoirs, the city's main watersource, are charged this year thanks to adequate rains and a generous contribution from the Krishna river, but the city continues to be at the mercy of a good monsoon.

Delhi, of course, seems to be the worst affected. With the onset of one of the hottest summers in recent times, the water crisis this year has been so bad that vast swathes of south and west Delhi—Vasant Kunj, South Extension, Greater Kailash, Chittaranjan Park, Uttam Nagar, Dwarka—haven't even heard the sound of tap-water for days together. The government reaction is knee-jerk: the famously inefficient Delhi Jal Board (DJB) presses its few water tankers into service, and residents have to bribe them for the privileged service; the Delhi government puts out routine ads in newspapers exhorting citizens to conserve water.

Water, or the lack of it, is making people petty and altering social equations—neighbours fight and guests are unwelcome to stay over. Complains Gautam Sen Choudhary, a consultant who lives in water-starved Chittaranjan Park: "My relatives have come over and I'm buying Rs 400 worth of private tanker and bottled water every day." Things are so bad that some residents' associations are planning to file a PIL against the government.

The crisis in Delhi, which has the highest per capita availability among all big metros, has a curious genesis.The DJB says it needs 150 million gallons per day more to meet the capital's demand. But distribution of the existing supply is skewed and has to do with geography. A person living in the Delhi Cantt area gets about 400 litres daily, while those in other parts of the city get as little as 30 litres. "All water treatment plants are located in north Delhi," explains DJB CEO P.K. Tripathi. "By the time water reaches south Delhi, it is reduced to a trickle. Then there is illegal tapping on the way." Tapping groundwater, which accounts for 12 per cent of the capital's total need, is the only other option. But even water tables are shrinking—in Karol Bagh and Greater Kailash, people spend Rs 3 lakh to dig up to 300 ft to get groundwater. Worse, several studies have found that the capital's groundwater is laced with a toxic mixture of a whole range of pesticides, fluorides, nitrates and other chemicals. It's not surprising the Central Water Commission has warned that "if the situation isn't reversed by 2010, Delhi will not be worth living in and there could be water riots."

Other cities may also meet a similar fate. Consider Mumbai. Documentary filmmaker Nadu Rao lives in Juhu, an area ringed by five-star hotels with unlimited water. Still he struggles with barely four hours of water a day—when the taps start flowing at eight in the morning, his four-member family gets into a tizzy finishing bathing, getting the maidservant to wash utensils, mop the floor before the supply dries up at 9.30 am. Chennai's groundwater reserves are sinking alarmingly as residents and developers dig deeper. The water spewed out is so hard that people are forced to buy water even for non-drinking purposes. The Chennai Groundwater Act, 1987, which doesn't allow use of pumps more than 0.5 horsepower capacity without permission, is followed more in breach. Hyderabad's plight is no better: the city gets only 129 million gallons per day as against the required 210, and that too on alternate days.

But for paltry tariff and flagrant flouting of laws, the crisis could have been alleviated somewhat. For one, plugging distribution losses would have made a world of difference: 45 to 55 per cent of water in our cities is unaccounted for. The ridiculously low prices encourage a culture of wastage: DJB charges anything between 35 paise (domestic users) to Rs 16 (industrial users) for every 1,000 litres. Treating a kilolitre alone also costs it as much as Rs 5. Bangalore's state-owned utility agency charges Rs 5 for a kilolitre to a domestic consumer while spending Rs 15.45 to supply it. In Hyderabad, 52 per cent of the billed water revenues are lost due to non-payment and non-collection of bills.

The unholy nexus between politicians, bureaucrats, developers and industrialists has also played havoc. Delhi was the first city to have a master plan in 1962, but it has been grossly violated. "Unauthorised colonies, murder of wetlands and reserved forests, defilement of Yamuna by industrial and domestic wastes are partly responsible for pushing Delhi to the verge of a water emergency," says K.T. Ravindran, urban design professor at School of Planning and Architecture. In Bangalore and Chennai, reservoirs and lakes have been claimed by settlements. Most of Hyderabad's 800 lakes and tanks have either run dry or have been filled up or encroached upon illegally. In Mumbai, the private water tanker lobby, controlled mostly by local politicians, has been instrumental in delaying the laying of a water pipeline to service water-starved areas. (Residents shell out Rs 500-1,000 per month for tanker water.)

An apathetic citizenry, with its back to the wall, is now waking up to the benefits of water harvesting. Civic agencies in Delhi, Chennai and Hyderabad have made rainwater harvesting mandatory for constructions of certain specifications.Last week, Delhi's first rainwater harvesting project in Panchsheel Park colony kicked off. The Hyderabad Metropolitan Water Supply and Sewage Board has asked the National Remote Sensing Agency to map out 38 old lakes so that they could be revived.

However, the emphasis seems to be less on efficient management and responsible consumption than on future mega water projects: private treatment plants and three dams on upstream Yamuna for Delhi; a Rs 875-crore pipe-in Krishna water project for Hyderabad; two mega pipe-in Cauvery projects for Bangalore and a Rs 720-crore project to bring water to Chennai from Veeranam lake, 250 km from the city.

The governments are possibly catching the wrong end of the stick. The easier solutions lie in plugging leaks, enforcing law on groundwater extraction, and realistic pricing. Also, civic bodies must work on equitable distribution, rainwater harvesting, less water-intensive flush systems, making industries pay for polluting water. Unless all this is done, citizens will continue to flout laws and decencies of community living. Till they start killing each other over water. It's still not too late.