From a trickle of drought-weary villages, it's now ready to deluge kasba, city and metropolis alike. Water harvesting is an idea whose time has come. 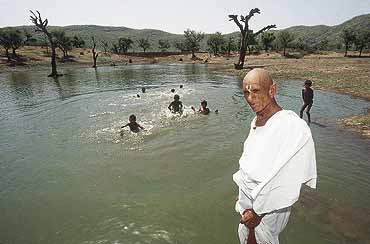 And the people heard. "Finally in 2001, our country discovered what rainwater harvesting means; newspapers, water boards, village communities, residents' associations in towns and cities, schools, universities—this year everyone's been making enquiries, keen to learn how to save and utilise rainwater," gushes activist Rajendra Singh, who's been in the frontlines of the water crusade for over 17 years now. Head of the Alwar-based Tarun Bharat Sangh, an NGO that has worked tirelessly to revive traditional water harvesting systems in five of Rajasthan's most arid districts, Singh received the prestigious Ramon Magsaysay award for his work this July.

A recognition that's added strength and, more importantly, brought visibility to the water harvesting movement that activists like Singh have been leading for over two decades now. The prize got the issue media attention, reinforcing the utility of conserved rainwater as a solution to water shortage by highlighting the benefits that many a community had reaped from it.