Not all is profit in the Rs 21,578 crore Laloo tom-tommed last year 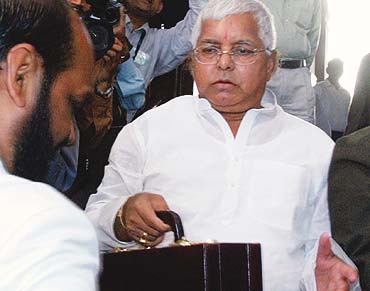 Here's what Laloo has done to increase earnings from passengers:

Milking Tatkal: This was for passengers travelling in an emergency. Less than 10 per cent seats were kept in the tatkal quota and released on the scheduled day of departure. The surcharge was Rs 100 per ticket. Now 30 per cent seats have been set aside for tatkal and reservations open five days before departure. The surcharge is Rs 250 per ticket. Additional earning for railways: Rs 150 crore.

Declaring Trains Superfast: More than 100 express trains have been declared superfast though their running time remains the same. The superfast tag attracts a surcharge. This upgradation meant Rs 75 crore in the coffer.

One year back, they were scripting the story of the "great Indian Railway turnaround". Upbeat babus, led by their mantri-messiah Laloo Prasad Yadav, went to town proclaiming how they got Indian Railways chugging, sparing no forum to tom-tom how it would mop up profits surpassing those of top public sector earner ONGC.

Compared to that buzz, things are unusually quiet for 2007-08. No tall projections this time, no talk of bettering last fiscal's Rs 21,578 crore profit. Rs 21,578 crore? Amazing as it sounded then, Railway Board members now confirm that much of Laloo's success story was more hype than substance. As one official put it, "The turnaround is probably one-third true, one-third well-orchestrated publicity, one-third jugglery of figures."

Always clever with words, Laloo seems to have shown skill with numbers too. A close scrutiny of the account books reveals the net investible surplus of the railways at Rs 11,000 crore—almost half of what's been touted as profits. Even this money has been earned at the expense of passengers and at risk to their safety.

Confirming as much, R.R. Jaruhar, till recently Railway Board member (engineering) and part of Team Laloo, says, "Things have been presented lopsidedly. Growth is a process of continuity, it cannot leapfrog. All this is accounting jugglery." Citing examples, he says, "A large amount of money being shown as profit is not available to be ploughed back. It's not investible surplus. Part of it is the suspense account: money promised to the railways but not yet given to it." This, conventionally, is not profit. 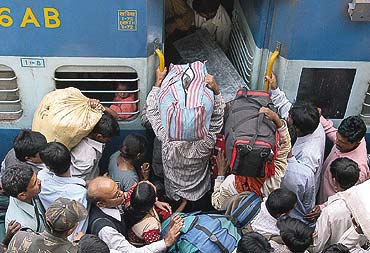 Not just that, the railway pension fund—which accounts for Rs 9,000 crore of the Rs 21,578 crore profit—was shown as cash surplus when it was money the railways can't invest. Says former railway finance commissioner S. Murali: "The railways are now displaying all their wealth in its full glory. But then it's not fair to compare with previous years, unless you put those accounts in a similar format." Adds Vijaylakshmi Vishwanathan, another former railway finance commissioner, "The railways under Laloo has altered the way the balance-sheet is presented. It has resulted in the revenues getting inflated artificially."

The creative accounting did not stop here. Making up the Rs 21,578 crore was:

But what about actual earnings? Here, the railways primarily did two things: substantially increased the load carried by freight trains and put in place a slew of ticketing rules which extracted money from passengers even as Laloo claimed he had not raised fares.

A chunk of the extra earnings—Rs 5,000 crore—came by increasing the carrying capacity of container wagons by an additional 10 tonnes each. The wagons were anyway being overloaded; corrupt officials pocketed the money which should have come to the railways. Laloo just decided to make it official, offering another of his rustic gems, "If you don't milk the cow fully, it will fall sick."

However, it was a practice experts had questioned repeatedly on grounds of safety. The rail infrastructure—tracks, bridges, wagons and locos—they pointed out, can be stretched only to a limit. While additional load was being carried, maintenance schedules were altered, compromising safety norms to allow more running time to trains. The frequency of train examination and maintenance too was changed. Earlier, train examination was done every time a train came back to its base station, irrespective of the distance travelled in the interim. The railways started carrying out this exercise after every 7,500 km.

As expected, various zonal divisions started reporting increased rail fractures, stress on old bridges and wagon coupler failures due to increased axle load and less frequent maintenance. Accessing some internal correspondence between the various zonal offices and Rail Bhavan, Outlook has come to know the following: These were the very concerns experts had voiced when the railways decided to increase the axle load without any trials and without the requisite approval of then chief commissioner railway safety (CCRS) G.P. Garg. Recently retired from the post, Garg spoke extensively to Outlook. "As the CCRS," he told us, "I raised objections. The railway bridges are old, hundreds of them needing rehabilitation. The railways wanted to run trains with an increased axle load without any checks, tests or technical analysis. I told them not to take ad hoc decisions but to fulfil the conditions laid down for increasing axle load." According to him, the tracks, the wagons, locomotives and even the wheels needed to be tested for impact of additional loading. 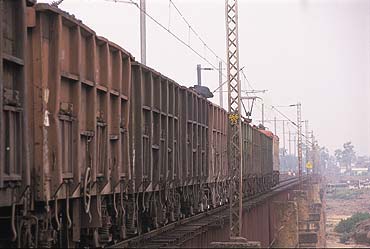 And if the railways under Laloo could increase the axle load it was only because infrastructure renewal work had been done before he took over, says Garg. His predecessor Nitish Kumar had created a non-lapsable Rs 17,000 crore corpus, the Special Railway Safety Fund, and large-scale renewals had been accomplished in terms of tracks, signalling, coaches and locomotives.

To get over the CCRS objections, the Rail Board officials, including Laloo's OSDSudhir Kumar—apparently the mastermind of the turnaround—assured the commission that they were increasing axle load only on an experimental basis and would fulfil all requisite conditions. The railways are now running higher axle load on almost all routes, but "fulfilling of conditions", that's another story.

And remember the iim-Ahmedabad study that first gave a stamp of credibility to Laloo's turnaround? Professor G. Raghuraman, author of the much-touted report that the railways commissioned for Rs 4 lakh, now tells us how that came to pass. "Additional revenue came from improving the turnaround time of wagons and carrying additional load," he concedes. But this growth is unsustainable, he adds. "The railways has taken full advantage of carrying extra load. There can only be a one-time increase with the same asset. Investment has to be made in asset improvement and upgradation," he says. Far from that, the turnaround has contributed nothing to passengers in terms of improvement in amenities and facilities.

The IIM study did make Laloo the man of the moment. So much so, visiting students from the Harvard Business School, Wharton and MIT were queuing up to study the miracle he had wrought. Or so it was projected. Now it seems that the visit by the students of the Harvard Business School in December 2006 was not to study any railway turnaround; they had merely called on the rail minister as part of their Camp India programme. Outlook contacted Seth Cohen, one of those students who had attended Camp India. He had this to say: "The visit was informal," he said, "arranged by our Indian hosts. It was not connected to any academic project." Ditto the MIT students toasted and hosted by Laloo. They came to India during their spring break in April 2007; the railways was another diversion during their eight-day break.

So, was the Laloo Express a passenger train all along? The minister does deserve some credit, though not the kind he managed to attract. Juggling numbers is high art for sure, but it doesn't always make sound commerce.

A Row Revs Up