Was He A Master?

A veteran writer's saga of defeat evokes only impatience 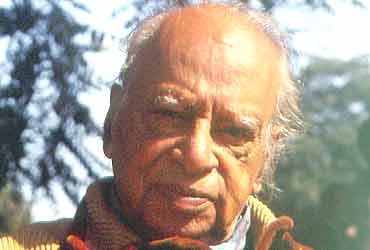 outlookindia.com
-0001-11-30T00:00:00+0553
Lajwanti
By Mulk Raj Anand
Orient Paperbacks Rs 95; Pages: 118
Reading Mulk Raj Anand's latest book, a collection entitled Lajwanti and Other Stories, is not a pleasant task. His work belongs to that era of Indian fiction where truth and morality begin to look like mirages shimmering unattainably in the pitiless heat of grim tradition, where hope is a caged mynah and where caste is everybody's landlord.

Anand's generation of writers broke ground when they wrote in English about the peasants, villages and semi-barbarism of India with cardamom-flavoured authenticity. But if this book can be used as an example, it seems they've remained forever in that desolate landscape, neither able to grow sweeter fruit nor develop a more refined palate. In these 12 stories, it's even possible to suspect a kind of satisfaction in this parade of dashed hopes and defeated lives. After all, the author belongs to the class that can pick imlis from the family tree without fear of in-laws, whose lives are not threatened by floods and brutish policemen. To report on those who are still caught in such traps, while doing nothing, not even speculatively, to raise the bars to freedom becomes a type of gloating voyeurism.

It is not the choice of subjects alone which makes these stories dismal, but the lack of finesse with which they are presented. Phrases such as 'the old woman floated on the sea of non-existence ' , 'Geeta's rotating halves of body ' , 'the aureole of good health exuded by Shri... ' abound. Cliches too banal to quote litter every page. The book itself is so annoyingly cheap in its cover design and presentation as to be an insult to a Sahitya Akademi Award winner, the author of half-a-dozen novels and a literary success in the era before 'post-colonial literature ' took its place in the publishing firmament.

Only a wraith of sincerity dignifies the writing and makes it seem, in these carefully market-conscious times, unpretentious. The author is 95 and he doesn't have time for beating around the bush. He tells his stories with the confidence of someone who has been used to applause for a very long time and does not doubt that he will continue to get it, even for this meagre offering. No dewy-skinned portrait of himself adorns the back of his book, nor was it launched to the accompaniment of canapes at the British Council. His attitude suggests that more rugged universe, in which books fought for their readers' attention on the basis of content alone, when cover designs consisted of two bands of orange with the title sandwiched in between and when authors starved with becoming modesty in garrets. How sad, then, that this book does not encourage us to be nostalgic.