Two fine books of photos, one frames the interface of dance and textile, the other a Bengal village 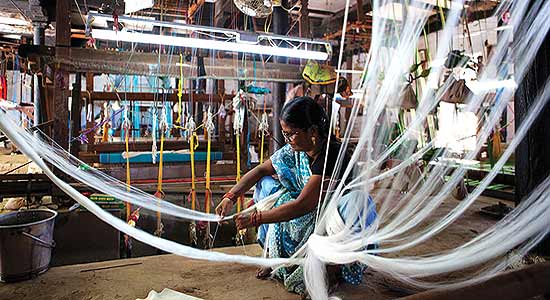 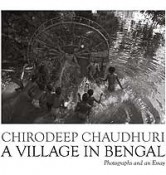 Dance of the Weave, by Briana Blasko, is a finely curated agglomeration of textile yardage seen through the metaphor and visual artifice of Indian dance—a five-year photographic project “documenting the interplay of dancers and the myriad hues, textures, drapes and moods of their costumes”. A former freelance dance photographer for the New York Times, Blasko moved from Brooklyn to India in 2007—and has travelled its length and breadth in a concentrated period of shooting. Her visits included villages and regions where many of India’s traditional dances and martial art forms originated.

One of the many strengths of Blasko’s photography is her point of view—specific and expansive, material and non-material; also, the way she is able to handle both the micro and macro aspects in wonderful juxtaposition. This is difficult, as what she captures in still frames are essentially complex movements—fluid lines of both the inherent threads of fabric-weave and the residual time-lapse arcs of dance choreography. Subtle focus is also on the mis-en-scene—background colo­urs, jewellery, and much else. One of my favourite images is that of an extreme close-up of haldi and kumkum, “colours that are repeated on many south Indian textiles”. The yellows and reds are livid in their exuberance and the metallic magma of the lava-like core gleams with the ferocity of beauty—all incarnadine in controlled oversaturation.

There are many other striking photographs—the triptych sequence of ima­ges capturing the gold-and-white swirls of a Kathak dancer; the slushing surf of indigo waters as the makers kick their legs in liquid-filled vats; or the detail of “a woman laying warp threads on a handloom at Maheshwar” in Madhya Prad­esh; and a contemporary dancer holding “the pallu of a Gadwal cotton sari with a Pochampally design on the silk border”. The latter two display a fine use of shallow focus-field technique.

Blasko is a highly skilled artist with a sense of meditative passion. Dance of the Weave is a beautiful,  elegantly des­ig­ned photographic portfolio—a long and poetic offering to both the art and the dialogue between Indian dance and traditional textiles.

In The Commuters, a small format, bespoke book of photography, Chirodeep Chaudhuri had exploited the power of close-up and portraiture, focusing on suburban train travellers in Mumbai. In his new book, A Village in Bengal, Chaudhuri expands the palette. The subtly understated sequence of grain-soaked images play out an intimacy that is normally reserved for a private family album. The photographs in this book contain memory, longing, and a vibrantly living past that is as alive as the present. To bring out unguarded moments with finesse and persuasiveness is Chaudhuri’s strength. Amadpur and Me, a fine essay that accompanies the portfolio of monochromes, not only adds an astute personal touch, but also places the entire project contextually.

Chaudhuri’s photographs can be stark—such as the opening image of wonderfully striated rice-fields foregrounding a clump of palm trees with the glowering sky as the backdrop. The images are arresting too—like the ones of a decapitated clay cow in a nondescript, lime-washed wall alcove; or a spider stranded by its own surface tension. They can also inhabit the realm of abstract minimalism—such as a close-up of an old woman hand-sewing a quilt with a thick-lens spectacle and a razor blade lying idly on the duvet itself. All these are very strong and pointed visuals that are thoughtfully framed and composed, and finely controlled in their use of graininess, contrast and exposure.

Unsurprisingly, there are an array of stills of everyday village life—scenes of Durga Puja replete with sindoor- adorned women in laal-paar white saris, alpona, conch-blowers, dhakai-drummers, bell-ringers, and priest performing arti. There are also evocative rural photos, family moments of sharing, eating and laughter, local markets with people selling live chicken, fishermen hauling their harvest, a gleaming boy bathing in the river ghat, animals copulating, details of carved terracotta walls, colonial courtyards, light, shadow, and everything in between and beyond. A Village in Bengal is both a fine visual testament and a collector’s art album.