Warming Up To It 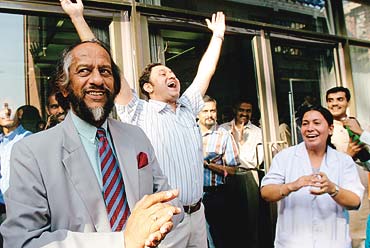 Dear Colleagues, I have been stunned in a pleasant way with the news of the award of the Nobel Peace Prize for the IPCC. This makes each of you a Nobel Laureate.... The fact that the IPCC has earned the recognition that this award embodies is really a tribute to your knowledge, hard work and application....
Yours sincerely, Patchy

In between pulling corks off champagne bottles and posing for the cameras with his family, Dr R.K. ('Patchy') Pachauri found time to send out this e-mail to the hundreds of scientists, economists and all other experts and specialists who people the Intergovernmental Panel on Climate Change (IPCC). His well-crafted compliments do not overstate the case: it really is the hard, unpaid labours of lower-profile actors that has propelled this UN panel to Nobel stardom in the company of Al Gore. And the Indian connection is not just panel head Pachauri, as the media's feeding frenzy at his door seemed to suggest. About 30 Indians, resident or expatriate, have been authors in the IPCC's latest assessment report.

There have been sexier institutional winners of the Nobel Peace Prize—Medecins Sans Frontieres, the IAEA, even Grameen Bank. Low on machismo, high on gravitas, the two-decade-old Geneva-headquartered IPCC doesn't police, campaign, rescue or uplift; rather, it weighs, sifts and distils. It does not conduct research on climate change, but assesses it, disgorging outcomes in measured tones every few years, in a series of reports. 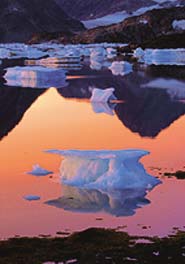 So it is all about process. But it is process that makes the IPCC exceptional in the clamorous, messy and confusing world of climate-change investigation. "Understanding climate change and its human dimensions calls for expertise from a variety of disciplines ranging from palaeo-climatology to international law," says Joyeeta Gupta, an IPCC lead author and professor of Climate Change Policy and Law at the Vrije University in Amsterdam. "The IPCC collects, collates and assesses the scientific information. It puts the literature available in a number of distinctly different fields and published in hundreds of journals in one easy-to-access format." In other words, it produces the big picture.

The IPCC subjects the research to an inquisitorial vetting and report-writing process carried out over six years by scientists and other experts appointed to it. The experts are held accountable for both their conclusions, and their omissions. "It's a mechanism through which the truth remains on the table, the rest disappears," says Prof Pier Vellinga, a Dutch climate change expert closely associated with IPCC research at its inception. The IPCC's fourth and latest series of reports, released this year, involved a hierarchy of 450 lead authors, 800 contributing authors and 2,500 reviewers. A policymaker's summary of each report has to be cleared, line by line, by member governments (every country in the UN is a member). Says Jayant Sathaye, an IPCC lead author and a scientist at the Lawrence Berkeley National Laboratory in the US, "It's a tough consensus-building process. As an author, you've to defend your chapter before some hundred governments over five days, five nights too; often you don't sleep before 4 am."

The IPCC's early reports were tentative, but progressively its conclusions have become less uncertain, its language has shifted, reflecting better data and greater agreement among modellers. Says Sathaye, "The IPCC has made a huge contribution to a consensus that global warming is happening; even extreme sceptics no longer deny that; what they say is, it may not be as much as claimed." Even the Bush administration now concedes that emissions caused by human activity are to blame for global warming, a declaration made by the IPCC with over 90 per cent certainty in its 2007 report.

The IPCC has been "massively influential" in the world debate on climate change, says Roger Harrabin, an environmental affairs writer for the BBC. "Governments need the most reliable analysis of climate data, and the IPCC was formed to provide that. We can't guarantee that its projections are always right, and IPCC science is always necessarily out of date—but it would be surprising if flaky science could find its way through the sometimes brutally rigorous IPCC process, and this is reassuring. "

This is not to say that the IPCC is not controversial. Those left of the panel think it's conservative, even timorous; those right of it that it's alarmist. Its workings, including the selection of scientists and election of its chief, are not free from charges of political interference. Famously, the United States (aka the world's biggest polluter, and staunch critic of the Kyoto Protocol) meddled in the last election in 2002, to prevent the outspoken Bob Watson from being elected as head for a second term by backing Pachauri, apparently expected to be more pliable. Gore's criticism of Pachauri—whom he called the "let's-drag-our-feet" candidate—led to a well-publicised war of words between the two.

Internationally, Pachauri appears to have ridden out the controversy, and also patched up with Gore. However, Pachauri has his critics: for instance, some Indian environmental activists think his record is, well, patchy. While acknowledging his strengths as a manager and organiser of scientists, they say he falls short of being a leader and a force for change; failing in particular to play a constructive role in resolving the impasse between North and South on reducing greenhouse gas emissions (see interview for his response).

IPCC experts also have their issues, not with personalities, but with the scope and focus of the panel. For instance, Joyashree Roy, an IPCC lead author and professor of economics at Jadavpur University, while lauding the panel as an excellent model of international scientific cooperation, says it needs to be a lot more multidisciplinary. Gupta also points to gaps in the IPCC's work because of its strong technological and economic focus, to the neglect of other social sciences, and detects a bias, at times, "towards the interests of developed countries and their science". Roy strongly believes that having advanced on the science, IPCC now needs to get to grips with the politics. "It shouldn't shy away from politics and from equity issues. Without being prescriptive, it needs to come up with more knowledge on the impact of climate change on different classes and income groups; on the varying burdens of mitigating climate change."

The IPCC was set up on the premise that if the international community could agree on the science, it could also act. But the panel is still struggling to do that, in substantive terms. Globally, emissions are still rising. In a world deadlocked on the politically explosive issues thrown up by climate change, even a Nobel laureate can't afford to rest on its laurels.