A jewellery designer-turned-actor, he stars in the latest Spike Lee and Wes Anderson movies, alongside luminaries such as Denzel Washington, Bill Murray and Anjelica Huston 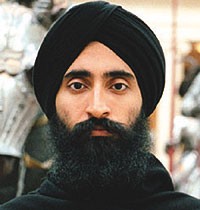 How did you become an internationally acclaimed high-end jewellery designer?
I live between Rome, Jaipur and NY (throw in some Paris too)—so it’s easy to be internationally anything. Other than that, it’s simple. Once chance and fate had played its cards, I took time to search out the best craftsmen, both in India and Italy, and then put it in the best stores in the world. From there the work takes care of itself. It’s a very pure approach to luxury.

Why the emphasis on religious and cultural symbols in your pieces?
No emphasis—these are just visuals in my life and I feel they are universal symbols. You can say I’m sharing a bit of India with the world. And not everyone sees religion in them.

How did you decide to become an actor?
I didn’t choose acting. The universe did.

And how did you land a part in Wes Anderson’s The Life Aquatic?
It may seem a little boring, but—Wes asked me one day and I said yes.

How did you get to work on Spike Lee’s Inside...