How would he reconcile support for a bloody war with ahimsa? 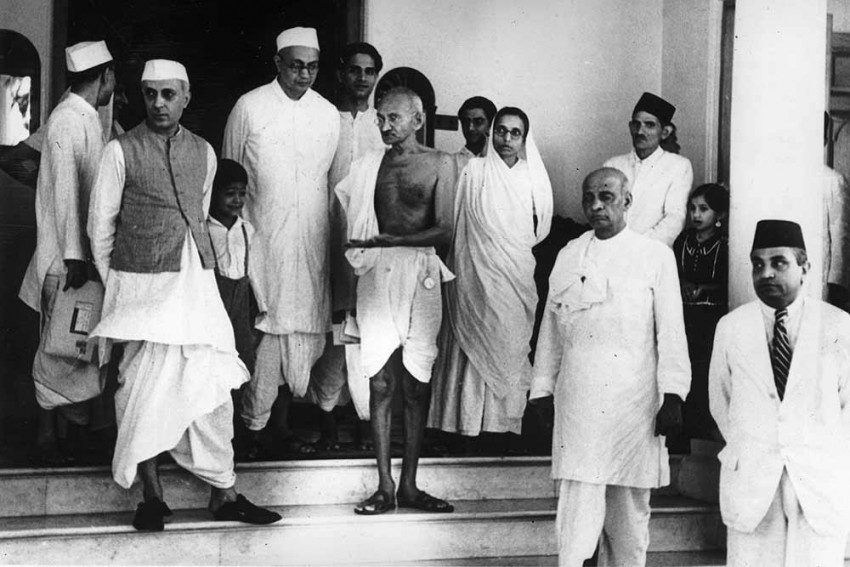 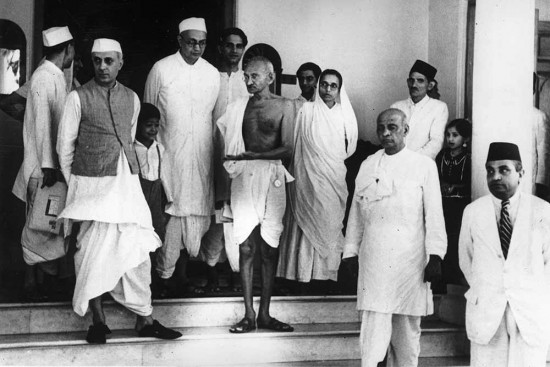 Britain was the great sea power of the day, outstripping all others by some distance. Yet its great achie­vement lay in negatives. Barring the inconclusive Battle of Jutland in May 1916 and a few skirmishes, it acted as a great deterrent—locking away the German High Seas Fleet in their North Sea harbours behind minefields. British trade on the seas thus went on unhinde­red—not a single troopship was sunk in the channel—while German trade was swept from the seas. But British and Allied shipping did lose millions of tonnes every month to German U-boats, which rampaged in the Atlan­tic. Things rea­ched alarming proportions in 1917, influencing the British offensive in Ypres and scaring the Ame­ri­cans. Matters improved when the Admiralty adopted the ‘convoy’ system of escorting merchant ships. The reason was a curious contradiction—the determination to have as many modern warships as possible, but coupled with a deep fear of exposing them to unknown, unseen new weapons (submarines, torpedo boats, and the new threat from the air).

It was on the waters between England and France, inside a boat called Kilfauns Castle, that Gandhi, then 44 and heading for London, heard of the start of what would become the Great War. He had boarded the ship in Cape Town on July 18, 1914, after a 20-year spell in South Africa which was climaxed by a fair if limited victory for Indian rights in that African land which British and other European whites ruled.

Accompanying Gandhi on the Kilfauns Castle were wife Kasturba and close friend and ally Hermann Kallenbach, a Jewish architect of German origin.

India was Gandhi’s destination. He was longing to give a new turn to India’s efforts for self-rule. But he first wished to consult with his political guru, Gopal Krishna Gokhale, who was in London for reasons of health.

It was eight years previously, in 1906, while Gandhi was leading an Indian ambulance unit in the hills of Natal, where white rulers were trying to suppress a Zulu rebellion, that he had hit upon non-violent resistance or satyagraha as the strategy for oppressed people facing difficult odds.

Finding himself in England when the War commenced, Gandhi offered to raise an ambulance corps of young Indians to assist Britain and its allies in the Great War. Officials in London accepted Gandhi’s offer, and a number of Indians, most of them students, signed up.

Among them was Sorabji Adajania, a Parsi law student who had worked under Gandhi in South Africa. Gandhi had sent Adajania to law school in London with a scholarship provided by Pranjivan Mehta, a Gandhi backer from the late 1880s, when both he and Gandhi studied law in London.

But from South Africa, Henry Polak, like Kallenbach a close ally of European origin, cabled Gandhi with a protest. Backing a war did not sound like non-violence, argued Polak, who like Kallenbach was a Jew.

Gandhi answered that when much of humanity was trapped in a conflagration, some compromise with violence was inescapable. In his 1914 view, Indians had to back Britain in the War if they wanted to move towards self-rule in India.

In London, about 80 Indians received training for six weeks. It was not a smooth exercise. The commanding officer in charge of the corps did not consult any Indian, even Gandhi, during this training, and resentment was caused when English undergraduates also being trained bossed over the Indians in the corps. Adajania led a mini-satyagraha and a solution was reached.

Gandhi noticed that London’s Muslims, many of whom were from India, were troubled when Turkey chose to throw in its lot with Germany. Could they back the Empire against Turkey, the world’s premier Muslim state at the time? 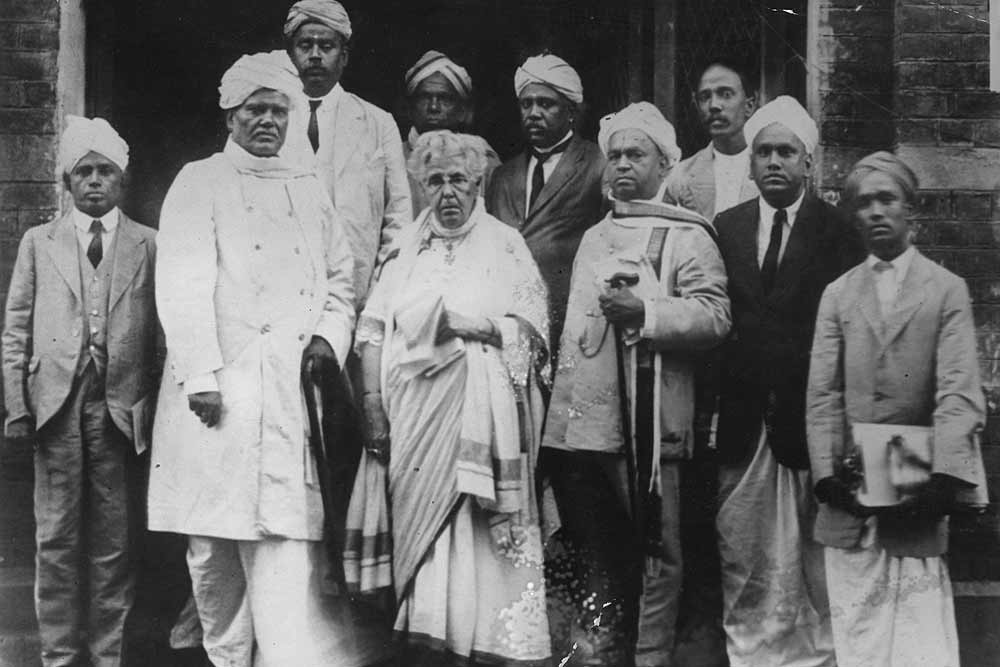 Aides de camp It was to Annie Besant (centre), Tilak and Jinnah that Gandhi turned to for recruiting soldiers for Britain’s war

Kallenbach’s knowledge of Germany and its geography was considerable, and Gokhale probed him on how the War was likely to proceed. Unable, however, to cope with the British weather, Gokhale left for India soon after Gandhi’s arrival in England.

Gandhi’s wish to be part of the corps he had raised in England was denied. Exertions before leaving South Africa and an experimental diet wholly restricted to fruits and nuts had damaged his health. The pleurisy afflicting him was not going away. Lord Roberts, the under-secretary of state for India, and his wife, Lady Cecilia, tried to look after Gandhi, but after it became clear that he was in no position to do ambulance work, Gandhi too left for India.

Kallenbach was to sail with Gandhi but he held a German passport and needed an Indian visa, which Gandhi tried hard to procure for his friend. However, word came from Viceroy Hardinge (who had supported Gandhi’s last satyagraha in South Africa) that because of the War all German nationals were being barred from India and an exception would not be made for Kallenbach. In 1914, when Britain’s Balfour Declaration in favour of a Jewish state in Palestine lay three years into the future, Kallenbach was seen as a German rather than a Jew.

Huge, numerous and in some ways contradictory longings resided in the Gandhi returning to his homeland after his long South African stint. He wanted to win India over to non-violent satyagraha. He wanted British rule expelled while holding that support for the War would advance the cause of self-rule.

“We stand on the threshold of a twilight, whether morning or evening we don’t know,” Gandhi to Mahadev Desai in June 1918.

But the War was not the only thing on Gandhi’s mind. He wanted Hindu-Muslim unity. He hoped to empower the weakest Indian with the spinning wheel. He wanted caste Hindus to recognise the offence of high and low.

He declared in Madras on February 16, 1916: “Every affliction that we labour under in this sacred land is a fit and proper punishment for this great and indelible crime that we are committing.” (Collected Works, 15: 173).

Gandhi’s fellow-ashramites in Ahmed­abad, including wife Kasturba, grew restive when Gandhi had admitted a young ‘untouchable’ couple, Dudabhai Dafda and his wife, into the ashram. Donors withdrew, forcing Gandhi to think of moving the ashram into a Dalit settlement when a young industrialist in his 20s named Ambalal Sarabhai saved the situation with a gift of `13,000. The tide turned and Dudabhai and his wife were accepted within the ashram and in its neighbourhood.

When in 1917 Gandhi defied the Raj and, despite an order to leave, stayed put in Bihar, where he had gone to defend indigo farmers, many in India were thrilled. They were again thrilled when at a public meeting in Gujarat he tore up the customary resolution of loyalty to the Empire with which every public gathering in India began. Loyalty, he said, could be presumed, as it was in England.

Addressing militant students in Calcutta, Gandhi described assassinations as “absolutely a foreign growth” and said that those wanting to promote that approach should know that he, Gandhi, would “rise against them”. On the other hand, if ever he chose sedition, he would openly advocate it; if the students were prepared to die, he would die with them (Collected Works 14: 396).

In early 1918, Gandhi asked peasants in Kheda district to non-violently defy what they saw as an unjust land tax.

But the Great War had posed tough questions for him. Could he oppose the politics of assassination being advocated by some, while simultaneously asking Indians to support the War?

His dilemma was revealed in his rem­ark in June 1918 to a young new associate, 25-year-old Mahadev Desai: “We stand on the threshold of a twilight, whether morning or evening we do not know.”

The Empire was in need of soldiers from India. When, for the sake of Hindu-Muslim unity, Gandhi asked the Viceroy to release the Ali Brothers (Shaukat and Muhammad) who had been detained for their pro-Turkey speeches, Gandhi was asked what he had done to recruit soldiers for the War.

He decided he would recruit. And he asked three major political figures in the India of 1918 to support recruitment: Bal Gangadhar Tilak, Annie Besant and Mohammed Ali Jinnah. In 1916, these three had produced the Lucknow Pact between the Congress and the Muslim League in which the Congress agreed to separate Muslim electorates in return for the League’s acceptance of a joint demand for Indian self-rule.

Tilak, Besant and Jinnah demurred. What, they asked, would the Empire give in return for political India’s support for the War? Gandhi continued to claim that unilateral backing would gain British goodwill and hasten self-rule.

During 1918’s hot summer, Gandhi (supported by Vallabhbhai Patel, Mahadev Desai and others) personally tried to recruit soldiers from Kheda district for the war that was continuing in Europe. He made this bid disregarding the departure from Ahimsa that the effort seemed to involve.

This Kheda bid was barely successful. Its peasants were baffled that Gandhi first encouraged them to defy the Raj over land tax, and then asked them to provide sons for the Empire’s war.

Even so, Gandhi raised 100 soldiers from Gujarat, including many ashramites. All had to overcome the tension between non-violence and war.

The conflict was severe inside Gandhi himself. On August 11, 1918, when he was in Nadiad, Gandhi collapsed. The heat, his lack of success in Kheda and, above all, the clash between his recruiting acti­vity and the non-violence that he saw as the message of his life, contributed to the breakdown. Rajendra Prasad, visiting from Bihar and introduced by Gandhi to Gujarat as a ‘brother’ who helped him forget the recent deaths of his brothers Laxmidas and Karsandas, noticed that at this time Gandhi “often wept” and said, “I do not know what God’s will is.” (Collected Works, 16: 387.)

After a few agonising weeks, Gandhi’s internal conflict ended. Germany’s defeat took place and the soldiers he had recruited were not called upon to fight.

However, Gandhi’s health remained serious for some time. He even thought he might die, especially since, troubled by how cows were being treated, he had taken a vow not to take milk. Kasturba found a way out, reminding Gandhi that in taking the vow he had cows, not goats, in mind. The vow left him free, she insisted, to drink goat’s milk. Gandhi accepted his wife’s solution and recovered on the strength of goat’s milk.

This was at the start of 1919. Within weeks, he would launch the stir against the Rowlatt Act which in the name of fighting sedition curbed free speech. Jallianwala Bagh and the Non-Coope­ration movement followed. Gan­dhi’s dilemma was behind him; the non-violent war against the Empire was on.

Rajmohan Gandhi is the Mahatma’s grandson and author of Mohandas: A True Story of a Man, His People and an Empire

The War Through Indian Lenses