War Up A Blind Alley

Support weakens for the war in the US, even as the hawks bay for a ground attack 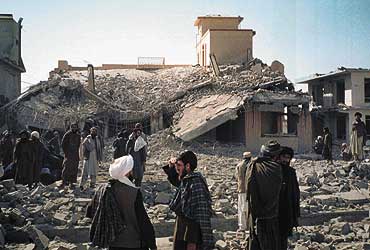 Washington is being hit daily by more of this nothing. The daily newspapers bring all sorts of stories, all short of a success story. Now in the media, in public, at political meetings, at government briefings, the question is getting louder and louder: what really are those bombs doing? After talking so much about the need for a new kind of war, America launched the old kind. US leaders have talked of patience; but a popular play doing the rounds features bin Laden hunted down by an fbi agent and taken to a public hanging. Audiences loved the hanging, and they want more.

The despair in Washington became almost official last week when the Pentagon put out a request asking for technological help in tracking bin Laden's den, or as it said, "conducting protracted operations in remote areas". The Pentagon listed 38 categories in which it sought public help. One was on methods to "detect, locate and map underground/concealed cavities that may serve as secure havens for terrorists". The idea was to tap America's creative potential outside its defence circles. After a month of what an impatient public is seeing as failure, this was hardly reassuring.