The world doesn't have to choose between the Taliban and the US government. All the beauty of the world—literature, music, art—lies between these two fundamentalist poles. 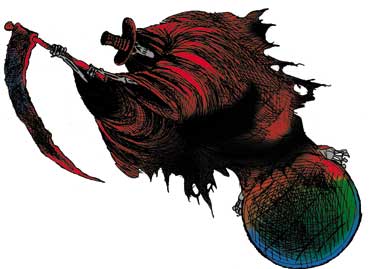 The UN, reduced now to an ineffective abbreviation, wasn't even asked to mandate the air strikes. (As Madeleine Albright once said, "The US acts multilaterally when it can, and unilaterally when it must.") The 'evidence' against the terrorists was shared amongst friends in the 'Coalition'. After conferring, they announced that it didn't matter whether or not the 'evidence' would stand up in a court of law. Thus, in an instant, were centuries of jurisprudence carelessly trashed.

Nothing can excuse or justify an act of terrorism, whether it is committed by religious fundamentalists, private militia, people's resistance movements—or whether it's dressed up as a war of retribution by a recognised government. The bombing of Afghanistan is not revenge for New York and Washington. It is yet another act of terror against the people of the world. Each innocent person that is killed must be added to, not set off against, the grisly toll of civilians who died in New York and Washington.