Tooned out of Scooby Doo and Popeye, it's war on television that young children are tuning in to 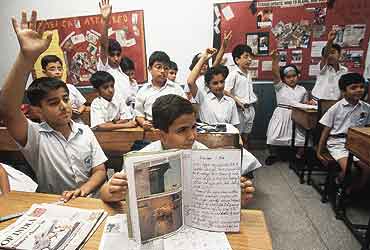 outlookindia.com
-0001-11-30T00:00:00+0553
The banner headline on the "War" bulletin board in a classroom of the Apeejay School in New Delhi's Saket neighbourhood proclaims: "Can you do me greater harm than hate?" Another focuses on the "crazed millionaire and his macabre mission". Amidst all this, a bunch of hyper-kinetic kids from Classes 4 and 5 furiously debate whether Osama is "like a fox or like a rat". War, thank television or blame it, has entered the children's imagination, their way of life, their games and their conversations.

Emotions vary on Bush and Osama. One inventive child thinks "Bush and Osama are behaving like kids. Osama has broken Bush's toy so now Bush wants to break his toy too." Another echoes parental reproach: "If one of us does mischief and is not punished then he'll become more naughty and think he'll get away with it." There's even a bit of anti-Americanism. "The way America is hunting for Osama, it should now be called United States of Osama," or "He (Bush) is dropping bombs as well as food packets. Why does he want to slap Afghanistan, then say sorry?" There's even sympathy: "Find Osama, but don't kill him."

Class 5 at St Thomas English Church School wouldn't agree as it shouts in brutal unison: "Osama must be finished." "He got so many people killed. He deserves to die," says P. Kishore in blatant aggression. What if innocent students like him get killed in the bombing of Afghanistan? "That would be sad, but if these students too are Osama's supporters, they deserve to die," he says. In Mumbai, Indraneil Banerjee, all of 11 and studying in Class 6 of St Mary's, is categorical when he says: "I won't feel sorry if Osama's dead because he is a bad character."

Stark images on television and information overflow on the Internet, it seems, has hijacked loyalties from Scooby Doo, Batman and Popeye, and transported them to newschannels like cnn, msnbc, bbc, Fox News, Sun News, Star News, Zee News and Aaj Tak. A study, conducted by Delhi-based Centre for Advocacy and Research (cfar) with unicef support, amongst children from the less-privileged sections of society in areas like Dakshinpuri, Seemapuri and Kalyanpuri of the capital bears this out. "News has become as fascinating as soaps and cartoons," says Anuradha Mukherjee of cfar.

"America has come to every drawing room. Every child is aware of the events," says Ranjana Joshi, senior English teacher at Apeejay, Saket. Not only the happenings, the children seem curious even about the medium that's bringing the message to their home. "They keep asking how they could film the crash? If they knew about it already, why didn't they stop it? If they can interview Osama, why can't they catch him?" says Mukherjee.

Four-year-old Hariharan has been flying his plastic toy planes with powder on them to recreate the smoke-and-rubble effect of the tragedy. Seven-year-old Raghav Gupta threatened to kill the roaches and insects at home by "inflicting an Osama" on them. "Earlier the enemy was not defined. Now the known commodity is Osama," says Smita Bhatt of son Mayank's 'war' games.

America itself has lost its awesomeness in the children's imagination. "Black Tuesday has resulted in a lack of faith in western superiority," says Aruna Broota, clinical psychologist and head of Delhi University's psychology department. Confirming her observation, 12-year-old Narendra of Dakshinpuri says: "Itna bada America, uske saath itna bada haadsa hua to hamare saath bhi ho sakta hai (If such a big disaster could happen to America the giant, then it could happen easily to us)."

Nothing—not the impact of the Orissa cyclone nor the Gujarat earthquake, which happened at home and were telecast as extensively—came as close to these children's consciousness as September 11 did. "It was because it came to us live, they could see the plane hitting the building in real time, could see people falling to their deaths. There was a sense of participation," says Mukherjee. Or it could also be that Indian children have lived through more disasters than their US counterparts. "They can empathise, and readily offer a helping hand," says L. Mathew, principal of Apeejay.

The disaster has also been like the comic books come alive, more thrilling than their video games, or war-thrill flicks. With fact more exciting than fiction, some couldn't distinguish between fictional and real violence. "Will there be a replay?" seven-year-old Mayank asked his mother when he saw the images for the first time. (The channels, of course, obliged—proof of a similar failure in adult imagination?) A lot may have accepted violence as a solution and romanticised war. "Hum bhi thode bade hote to ladayee ke liye naam dete (If I was old enough, I'd have volunteered for war)," said a child in the cfar survey.

If the boys are thrilled by all the action, girls are perturbed by the humanitarian aspect. "We feel a little troubled by the fact that the Afghans are so hopelessly outmatched," says 10-year-old Meghna Bera, a student of Class 4 at Calcutta's South Point School. "They're so poor, how can they fight?"

How are parents coping with their children's latest preoccupation? Not too well. "We explain that terrorists don't represent a whole religion. But now that everybody seems to think that the war against Afghanistan is right, it's difficult to justify 'showing the other cheek'," says Indrani Banerjee, mother of Indraneil.

Meanwhile, schools have been organising activities with the event in focus. Mumbai's St Mary's explained to the students that the "bad people" should not be identified as Muslims, that there should be no change in their perception towards the Muslim students. Springdales School in Delhi organised bulletin boards on peace. Apeejay made the kids write letters to the US president.

Not all schools though are as foresighted. Says Augusta, a Class 5 student in Chennai's St Thomas English Church School: "Osama is bad because he uses chemical weapons on innocent people." How does she know? "Our Science Miss told us." The teachers flaunt their students' notebooks where they have assigned "general knowledge questions" to test the students' awareness of the war. A sample of questions: What did the terrorists do with the hijacked planes? How did the world react? How many countries support the US? What exactly is India's stand? What do Bush/ Osama say? Answers have to be "factual"; including the one for, Who exactly was behind the attacks? Even Bush would find it tough to answer that.