Want To Look Inside His Head?

Can you tell if it's just normal growing-up pangs or if your teenaged child is headed for serious trouble? 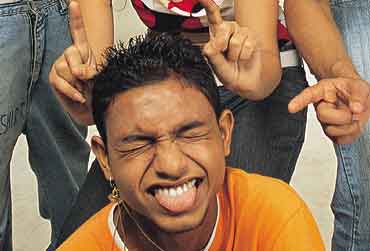 outlookindia.com
-0001-11-30T00:00:00+0553
It's been exam time for most of our teenagers. That time of the year when we talk about their crushing academic burden, count up board-exam-stress-related suicides, regret our unreasonable career expectations of them. Yes, it's that time of the year when we feel sorry for them. Very different from the times when we demonise them for being brats run amok. Now's the time when it jars to talk of the Delhi Public School MMS incident that had, just months ago, scandalised the nation. We'd had incensed discussions then, about the audacity of a 17-year-old boy from this upmarket school in the capital being arrested for using the camera in his cell to record, and circulate via MMS, a girl from his class giving him oral sex.

His parents hadn't had a clue, nor had hers. Much like, just last month, the mother of a 13-year-old girl in Calcutta didn't have any inkling of how grave a damage she was wreaking when she scolded her daughter for the umpteenth time about watching television instead of studying for her exams. The girl hanged herself.

Surely there's a pattern here. A similarity that runs deeper than the differences in these two unrelated incidents, these separate times that we have allocated to monsterising and mortifying our teenagers. Does the connection lie in our disconnect with them as parents? How much do parents and teenagers feel they communicate with each other?

Not much, if the Outlook-Synovate survey conducted among 422 teenagers (between ages 13 to 17) and 415 parents in six cities across India is any indication. In fact, this is one of the few issues the two groups polled agreed readily on. With 56 per cent of the teenagers and a near-similar 54 per cent of the parents agreeing that the two are not able to "truly communicate" with each other. And as many as 73 per cent teenagers and 68 per cent parents admitting that teenagers aren't able to speak to their parents about intimate things like their love life and sexual behaviour. 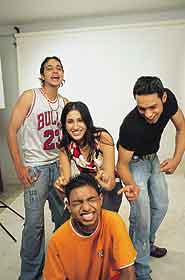 And there is a lot going on in teenage private lives we aren't talking to them about. Surprise inspections of schoolbags, say teachers in Bhopal, these days often reveal pornographic literature tidily tucked between textbooks; "I recently discovered a condom in an eighth standard student's pocket," informs schoolteacher Garima Srivastava, "He said he'd found it lying on the street!" More blasé, a group of teenagers in Chandigarh is clear that drinking liquor on the sly in school, or openly outside, "is common, and shouldn't be taken seriously because it's just for fun, mostly about breaking a rule or two." Meanwhile, as older teens initiate their juniors into drugs at trendy post-midnight "moonlight parties" in Pune's posh Koregaon Park, they say it's about "forgetting all pressures".

If you think you don't know the teenagers mentioned above, think again. One such might just be living in your house. Taking your car for a surreptitious spin. Maybe even swigging some Scotch while at it. Not on the way, keep your fingers crossed, to meet up with friends who're into being high on drugs and life. Coming back home late at night to surf into a secret cyber life. Making purchases so precocious with the allowance you've provided that you'd turn red...if you only found out.

Surely enough, the parents of these adolescents confessed to being uninformed about large chunks of their children's lives.Would talking to these children have yielded information? And how open are teenagers about wanting to talk to their parents?

Chandigarh teenager Natasha Singh wants her parents to talk to her: "Instead of clamping down on me, I wish my parents would discuss things with me. They are not comfortable talking about things, except that I shouldn't be drinking, smoking, fooling around with boys... all for reasons of health." But in Chennai, Murari Vasudevan would rather his parents didn't speak much to him: "In the name of being open and appearing to be keen to discuss everything with me, my parents insist on talking about things I don't want to discuss with them. Like, they want to know which girl I am speaking to, when I'd rather not talk about it."

Contradictory signals that make clear how confused today's teenagers can be, diagnoses Shelja Sen, child and adolescent psychologist at Delhi's Sitaram Bhartia hospital. "The done thing of late is to demonify teenagers. To target them variously for being closed, unreasonable, irresponsible and wild," she explains, "Sure, they are intimidating, but that's just a façade they have on to deal with the world. Scratch the surface and you'll find a perplexed child within." Sen, in fact, draws parallels between the behaviour of teenagers and two and three-year-olds—it is at these two ages that children are the most rebellious, into testing limits and experimenting with and trying to understand the world around them. "Like for toddlers, parental authority and direction are a need and necessity for teenage children. Without which they could end up harming themselves. It's imperative that they be listened to, given clear feedback, and rules be drawn for them," says Sen, but not without qualifying, "But these rules must coexist with open communication channels. Because living with a set of rules that are inflexible and non-negotiable would be like living in a prison."

As if on cue, 16-year-old Diya from Chandigarh, complains: "You can't just lock us up and say we are trying to protect you." Friend Pramit, also 16, is as bitter: "And this when grown-ups are watching blue movies, getting drunk themselves! My dad has actually told me he used to drink when he was my age, but won't hear of me doing the same. I know I hold drinks well, so when at parties I generally take five to six pegs."

Like Pramit, B. Vindhya, 17, also makes sure she finds time and space to live her desires away from her parents' gaze. Having bunked her classes to spend the afternoon with her boyfriend in a Bangalore mall, she's not into making excuses for her behaviour: "I am not cheating on my parents. They have their share of fun and I am having fun with my friend." Seeking permission never helps anyway, reasons Vindhya: "I used to go for evening walks, they started sending my younger brother as an escort. I like being on the phone, so the parallel line in my room has been removed, now my mother spies on me whenever I am on the one phone that's installed in the hall. I scored poorly recently and my father suggested my mother quit her job and take care of me. Also, the cable connection has been cut off to improve my academic performance and we are now expected to watch only Doordarshan. It's ridiculous...my parents are confused and their statements always appear confusing."

Well, parenting teenagers has always been confusing, but perhaps never as much as it is in these torridly tempting times for the teens.

When and how does one get to know whether one's child is in, or heading towards, real trouble, or just a normal adolescent going through the growing pains of becoming an adult? Is the child at high risk for such behaviours as drug and alcohol use, dropping out of school, pregnancy, violence, depression, or suicide? (See box)

Doesn't help that many adolescents become skilled manipulators: highly secretive, and expert at wriggling out of difficult situations. If a parent just "doesn't want to know" on some level, a teen can easily manipulate the situation so parents feel everything is fine.Also, parents do get into the cycle of denial, always finding a way to explain the deviant behaviour away so as to avoid the pain that is inevitable when you take decisive action with a rebellious, defiant child. As many parents will vouch, to say no is so much harder than saying yes to a teenager.

"Because saying no means conflict, conflict resolution, which needs communication that is anyway lacking. So, the desire to avoid conflict with children wins the day, and parents bend backwards to be accommodative," says clinical psychologist Neeru Kanwar, senior member of the Indian Association of Family Therapists, "Sure, it's necessary to keep some space for flexibility in the rules you lay down for young adults, but it is equally necessary to be clear that some rules aren't negotiable."

But this isn't happening much as many parents are "giving in too easily today", emphasises Chennai-based psychiatrist R. Thara: "Naturally then, for these children, getting what they want is a matter of right. Some blow up Rs 10,000 a month as pocket money, for many even this is inadequate." Prabhat Sithole, head of the department of psychiatry at Lucknow's KGM University, minces no words in blaming parents: "The mobiles, laptops, bikes that are given to children today are often more about your own status than about teenage needs." Why, Pune psychiatrist Nilesh Nahapade actually came across a 17-year-old boy who was gifted a Maruti Zen by his parents for having passed his exam: "The motto seems to be to give or not give rewards, there is no concept of punishment today!"

Here's the difficulty though: the thing about disciplining teenagers is that one has to be disciplined oneself. As N. Choodamani, Bangalore schoolteacher and mother of two teenage children, puts it: "Parents have to lead transparent lives. My husband and I never leave our children behind to go to late-night parties, we go out only as a family. When we go to bed we keep our bedroom door open and we ensure that they keep theirs open... these are things that we have consciously cultivated." A tough act to emulate the Choodamanis as parents, many parents would argue. Psychologist Rajshree Sarda, who is counsellor for half a dozen schools in Chandigarh, routinely encounters chronic discipline problems in teenagers. As things stand, she observes, most parents today are 'Don't-Do-as-I-Do Parents': "They'll yell 'don't do this or that', and then promptly go ahead and do themselves what they have forbidden their kids from doing. Children will copy what they see."

Because, no growing up can happen without context. And we can't arbitrarily as adults decide when we choose to talk to, and even talk about, teenagers. Our concerns for them cannot be dictated by the news of the day. Says psychiatrist Shekhar Seshadri of Bangalore's NIMHANS: "Yet again, questions about adolescent sexuality flew hither and thither, precipitated this time by the MMS episode! What's wrong, is anything wrong, where have we gone wrong, is the media to blame, does this have anything to do with parent-child relationship, has liberalism gone too far.... The problem is the reduction of sexuality to an act. When the relational and affirmative contexts of sexuality are minimised, we will have MMS episodes. What's required is life skills education for children and adolescents through which a more sensitive and healthy understanding of the larger context of sexuality is ensured. Which includes love, relatedness, commitment, honesty, openness, communication, mutuality, aesthetics and so on...."

So begin the dialogue. And, while at it, remember that you're the adults, the ones who have learnt through time to verbalise complex contradictory feelings and reactions. Adolescents find it more difficult to be articulate, overwhelmed and confused as they could be by the seeming onslaught of complex emotions that come as they move towards adulthood.The chats won't be easy, only essential.