Is Delhi's message to the Hurriyat a reflection of its confidence crisis? 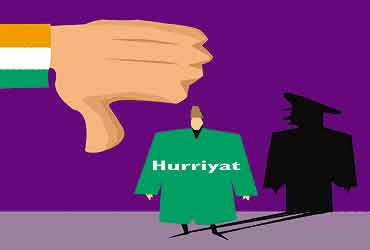 New Delhi did not confine its displeasure to verbal, albeit unofficial criticism. Only days after the press conference, the PM met Sajjad Lone, the son of Abdul Ghani Lone, the head of the People's Conference who has been estranged from the Hurriyat as well as from his brother Bilal Lone, a member of the APHC executive committee. The message Delhi wished to convey was unambiguous—don't even think you are the only representative of the people of the Valley. Not only is there the National Conference, there's also the PDP with two formidably popular leaders in Mufti Sayeed and Mehbooba Mufti. We can chop your existing support base into bits by promoting rivals within the nationalist movement.

There have been many low points in Delhi's understanding of Kashmir and consequently in its strategy for containing separatism in the Valley. But this must count among the very lowest. Let's see just whom our policy entrepreneurs are accusing of having sold out to Pakistan: Mirwaiz's father was killed on May 21, 1990, by terrorists directed by Pakistan because he refused to endorse or call for Kashmir's merger with Pakistan. His uncle was killed and his 105-year-old school burned last year because he braved a spate of threats from Muzaffarabad and met deputy PM L.K. Advani a second time in the winter of '03. Abdul Ghani Bhat's brother was killed by the same gang and a grenade with its pin partly pulled out was put in his car.