Pipraua hankers for a road. They haven’t got one, so they’re staying put. 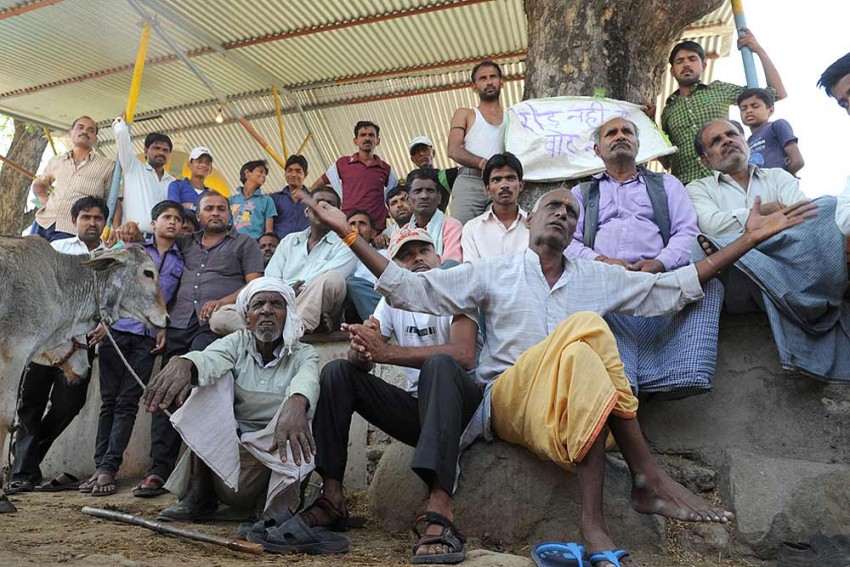 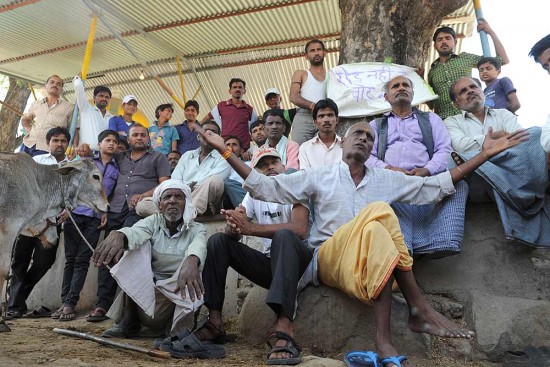 Following a functional road in Datia district of Madhya Pradesh, en route to Piprauakalan, a hamlet of 2,500 people, a hive of activity meets the eye—the golden sweep of wheat fields, rickety tractors disgorging hay into craters, wobbling over glaring ‘crocodile cracks’, harvest machines spewing husk and a and a picturesque driveway plunging, then dribbling away, into nowhere. Chunks of the road between the fatigue cracks gradually work loose and may eventually be plucked out of the surface. As we bounce and stagger our way into Pipraua, a weather-stained banner reading ‘No Road, No Vote’ greets us. The foundation stone to flag off a road-building project in 2006 by none other than chief minister Shivraj Singh Chouhan is a battered souvenir.

Pipraua is yet another blind spot dotting the vast interiors of India, adding to the sobering roll-call of those villages that have fallen into decades-long neglect and oblivion. But Pipraua’s villagers aren’t mute, helpless sufferers. They have boycotted polling booths in election after election since 2004 demanding their basic need—a serviceable road. The booths in Pipraua have drawn an absolute blank in the last ten years. In fact, according to the Election Commission records, of nearly 25,000 voters from 44 polling booths in this area of Datia district, only around 100 people voted in the last Lok Sabha elections. “We are fed up with leaders and their false assurances. For us, BJP, Congress or aap are all the same. Independent India hasn’t altered our fate, so why should we vote?” asks Pritam Sharma, a scraggy 58-year-old, the village trailblazer also known as Dadabhai. He and others have mulishly stuck on to a resolution made 10 years ago. The decision to boycott the elections wasn’t a hurried one, but taken collectively by some 1,500 farmers after much deliberation at a gram sabha. Now, even as Madhya Pradesh is begrimed with the heat, dust and hurly-burly of a Lok Sabha poll frenzy, Pipraua maintains its hush. “Not even a single inch of road was rolled out even after Shivraj Chouhan laid the foundation stone for a project eight years ago. So this time, not just us but residents of five other villages have also decided to give the elections a miss,” says Avdesh Sharma, the village sarpanch.

But instead of being shamed by the protest, the parties have shunned them in return. So, as the rest of India is sprayed by poll colours, this forgotten hamlet in Bhander tehsil, bereft of posters, hoardings or loudspeakers,  hasn’t witnessed a single election campaign. In Pipraua, the Modi wave, aap’s audacious challenge to the status quo or a Congress fightback is only hearsay, or bits of news picked up in visits to neighbouring villages. Deso­lation hangs in the air. “What does social development mean to leaders anyway? We’re poor and therefore have been cast off,” rues Geeta Kus­hwaha, wife of a former sarpanch. 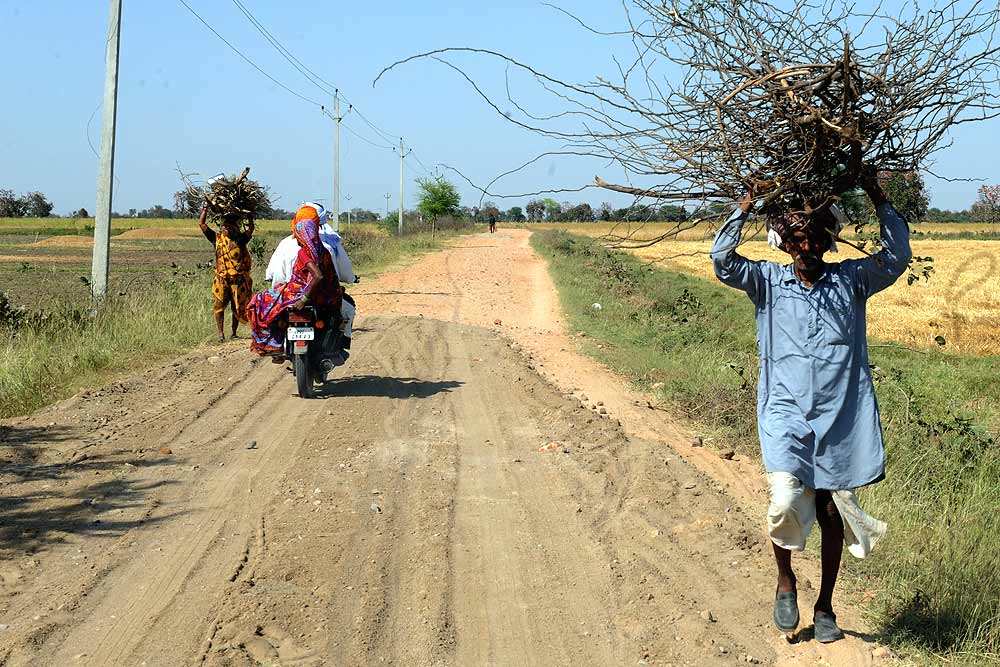 As Madhya Pradesh votes next week, the naysayers of Pipraua would hold a grand feast on no-vote day instead.

Pipraua’s unique protest has drawn in all castes. In a village dominated by Brahmins, and where OBCs and Dalits comprise only 30 per cent of the population, it’s interesting how a road (or the lack of any) has been the tangible unifying force. “Pregnant women suffer miscarriages while being taken to a far-off hospital. During the rains, the whole area goes five feet under water; we have seen our children drown. Many letters have been written to ministers, but no one is interested in making the road motorable,” says Jagdish Prasad Rai, a village elder. “If we had a decent road we could have sent our children to good sub-district schools, but we have to contend with these ramshackle hole-in-the-wall things that usually remain shut,” rues Savitri. Pipraua has also seen many marriage alliances fall by the wayside. “No one wants to marry our girls because of lack of accessibility, and it’s not possible for us to migrate. The number of unmarried people is growing,” says Ram Charan, a farmer.

A solitary stone-paving machine puffing out jets of mud to smoothen out the road earns weary condescension. It’s the only ‘poll sop’ they call their own. “What’s the point of having muddy tracks around election season? The rains would anyway wash them away, kicking up clouds of dust,” notes Dharmendra Sharma, a young shopkeeper. He’s keen on moving to Jhansi as markets here remain under water for five months. “When we asked for compensation after crops were damaged, the local MLA Ghan­shyam Piraunia said he can’t do anything as we’ve not voted for him.” With crops wasted for two years running, unproductive fields and the brazen apathy of the local politician has driven some to desperation—the fear of theft and kidnappings loom large. “Amidst such hopelessness, brigands make away with farm tractors and motorcycles, and thieves steal jewellery and cash. We are left with nothing,” bemoans Ram Prakash Bhargav, a farmer. “The state has offered us little security, so you will spot villagers brandishing rifles to ward off threats.” Pipraua’s cup of woes runneth over.

As Madhya Pradesh votes next week, the naysayers of Piprauakalan would give the two polling stations a wide berth and have a grand feast on no-vote day instead. “To all parties we’ll say Jai Hind! Who cares for a minuscule village on India’s map anyway?” gestures Pritam Sharma dismissively. Pipraua may be a small slice in the rural pie, but the idea of a boycott appears to have spread to other villages in the district along the rundown main-travelled roads. “Sar­sai, Kulhariya, Bainda, Pyawal, Nicholi will not vote this year unless there’s a magic turnaround,” says Ballav, a panchayat leader. The mere three-km stretch from Pipraua to Sarsai takes us over two painstaking hours to cover. Looming hillocks fra­ming a quaint, dusty village hove into view—a village sore over pani, bijli, sadak. “We pledge to boycott elections across the region unless our demands are met,” says Ramnav, a local. In this patch of  Madhya Pradesh’s rural hin­terland, the absence of motorable roads mean boats are little vessels off­ering a lifeline. As some areas go 15 feet under water, residents move to the adjoining hills, with little hope of survival.

Fighting for mere subsistence, villagers can’t be blamed if they think the elections are a sham. “People talk about reaching the moon and we are yet to reach the adjoining sub-district,” quips a livid Pritam. Will they get any respite on this road to perdition?