The many fervent cinematic moments do not rise above the ordinary, they do not touch you profoundly. 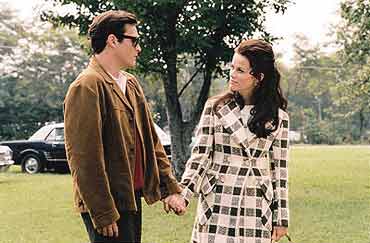 Perhaps it's to do with the fact that I caught this Oscar winner in between viewing the many unsung gems at the European Union film festival. In comparison to the sheer freshness of themes, the range of characters, the span of emotions and the narrative ingenuity in European cinema, Hollywood had to feel tame and predictable. Not that Walk The Line is a bad film.

It's a solid, faithful biopic on Johnny Cash (Phoenix), bringing alive the details of his troubled musical life—the grim childhood, the foray into the armed forces, the humiliation of being a door-to-door salesman, the move from gospel to country music, the estrangement from his conventional wife (Goodwin), the womanising, the self-destructive drug abuse, and, most of all, the abiding love for his idol June Carter (Witherspoon). But the many fervent cinematic moments don't rise above the ordinary, they don't touch you profoundly. In terms of story-telling there's nothing that takes your breath away. The film boasts of extremely competent performances, particularly the extraordinary Phoenix. As for Witherspoon, with her nasal twang and perky persona, she is sweet and sassy but I feel Felicity Huffman in Transamerica was far more deserving of the Best Actress Oscar.