Waiting For The Good Fight

Much of the rest of the world may be against the threatened war. Try telling that to the Kurds. 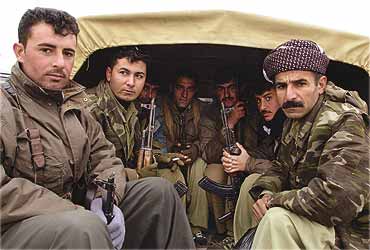 outlookindia.com
-0001-11-30T00:00:00+0553
In a smoky coffee shop in the Kurdish town of Salahuddin, two dozen men sat in a ring around a big-screen TV last week watching the scenes from peace demonstrations around the world—and scowling. "No war with Iraq?" hissed one man. "What do those people know about war? They should spend five minutes as a Kurd. That would change their minds."

There are no peace marches in Kurdistan these days: the official position is that war cannot happen soon enough. "This war is the hope of 25 million people," said Fuad Tawfiq, 59, a one-time petrochemical engineer who spent 14 years in a Baghdad prison, accused of supporting a pro-independence Kurdish party.

In the Kurdish self-rule area of north Iraq—a territory the size of Switzerland where Kurdish autonomy is protected by daily British and US air patrols—the talk of war is when, not if. The Kurds are convinced the US intends to push ahead with its plan to oust Iraqi leader Saddam Hussein, believing they will finally see the end of the man they accuse of genocide. Turkomen, Iraq's third largest ethnic minority, are equally hawkish. And people coming north for fear of the fighting report that Shi'ites and even reluctant members of Saddam's own Baath party are secretly anxious for the bombing to begin.

"People now live a very difficult life and they want this situation finished," explained Samir Khader, 25, who runs a small grocery shop in Kalak, a town at the edge of Kurdish territory. From his rear window, there is a clear view of Iraqi government tanks and positions on the hill above. "People want it finished, even if there will be bloodshed."

The Kurds have, since 1991, governed themselves with an elected parliament, though with some deadly infighting between the two main parties, the Kurdistan Democratic Party and the Patriotic Union of Kurdistan (PUK). There is a strong and largely unhindered media here, a satellite dish on every small mud roof, an Internet cafe on every city street and considerable public criticism of the government—a marked contrast to Baghdad. But the economy is stifled by the sanctions on Iraq and air patrols notwithstanding, the Kurds live in constant fear of fresh attacks from Saddam.

And so these days they keep their TVs tuned to Fox News—the hawkish US channel perfectly in tune with the Kurdish sentiments—and watch the military build-up in the region with an anticipated sense of satisfaction. The Kurdish government is officially on a war footing: schools have been closed here until further notice; the key files and computer systems of government ministries have been evacuated out of the main cities; citizens have been instructed to stockpile at least a month's worth of food and plenty of petrol.

There are military preparations, too: officially, the Kurds are staying out of this fight. Their peshmerga ("they who face death") warriors, in their turbans and pantaloons, will simply defend Kurdish territory, according to PUK leader Jalal Talabani, should there be an incursion by Saddam's troops.

But Turkish forces are already on the ground here, ostensibly to provide a buffer against Kurdish or Iraqi refugees fleeing into Turkey, as they did in the Gulf War in 1991. And there are also persistent rumours that US special forces soldiers are installed on a few snowy mountaintops. (Both the Kurdish and American governments deny that.) Certainly, the five airstrips in Kurdistan have been upgraded in recent weeks and are now guarded by dozens of peshmerga in crackling new uniforms.

The Kurds have been badly let down by the US before—most recently in 1991, when the first President George Bush encouraged Iraqis to rise up against Saddam, then provided no support and left the Kurds and other rebels to face the dictator's wrath.(The embarrassment of that debacle yielded the air patrols that guard the self-rule area.) So they have no illusions about the US or British claims of wanting to bring democracy to Iraq.

But they believe that this time, their interests and Western ones are so similar, they cannot but benefit. "We know the American people will come to Iraq for their own interests and not for our sake," says Taha Ali, a teacher who was driven from his home in Kirkuk by Saddam's Arabisation policy a decade ago and who now lives in a grim little village on the Kurdish side. "But they are concerned with weapons of mass destruction and we want to get rid of this tyrant who put us through so many atrocities—so our interests are parallel."

It is the subject of ongoing debate here whether the Kurdish territory will serve as a launching ground for a US attack headed south. There is no question that the oil cities of Kirkuk and Mosul, both only 40 km across the border from the Kurd-ruled area, will be key targets in the fight. Saddam has been sending in extra troops to defend the two cities and his Republican Guard is digging bunkers along the main streets. Turkey has said it will move on the cities if it needs to protect the Turkomen minority—though the oilfields, and the pipeline to Turkey, are certainly also a priority. And protests notwithstanding, the Kurds have their own designs on the cities. "We will not send our forces to Kirkuk or Mosul," says Talabani, then grins. "But if the (Kurdish and Turkomen) deportees want to go back, if the people of Kirkuk and Mosul will rise up, congratulations."

The one tempering factor in the Kurdish warmongering is the widely-held conviction that when the American military onslaught begins, Saddam Hussein will attempt to get in at least one vengeful strike at the people he can most easily reach. Thousands of Kurds were killed in, and thousands more still bear the scars of, chemical attacks on Kurdish towns and villages in 1988. "Of course he will hit us again—we can see his Katyusha (rocket) bases right there on the hilltops," says Haziba Najiba, 25, an internal refugee from Kirkuk who now lives in a tent in a camp called Takia. The Kurdish government says it has been asking for protective equipment—gas masks, chemical suits, decontamination soap—from western governments for months but none has been forthcoming. Survivors of the attack on Halabja—where at least 5,000 people were gassed to death on March 17, 1988—have no better protection now than then: just blankets to soak in water and hang over their windows. Officially, this is a question of sovereignty—Kurdistan's is not a real government and thus no other government can provide it with bilateral aid. More likely, Turkey (which has a population of some 15 million Kurds of its own and is uncomfortable with the small Kurdish proto-state on its border) has objected to the assistance, as it has blocked all military aid to the Kurds.

A senior member of the Kurdish government proffers a darker theory. "Probably the US wants the drama of people dying en masse so that the world will say, 'You're right, Iraq has weapons of mass destruction.'"

The sole voice (and it's a small one) against the war is Kurdistan's Islamic Union: they want no part of a US-led war. "We don't believe any foreign powers should participate in this because it's not good for the Kurdish reputation and our problems can be solved in other ways," says spokesman Omar Abdul Aziz. Instead, he feels Kurds and other opponents of Saddam should stick to political activism against him. That hasn't done much to dislodge Saddam in the past decades, though, surely? "No," agrees Abdul Aziz, and sighs.

All this, of course, leaves the Kurds waiting in the wings with growing impatience.They are disgusted with the opposition of France and Germany to the war. "Evidence?" grumbles Prime Minister Barham Salih. "Go to Halabja and talk to the victims of the genocide—they don't need evidence that Saddam has chemical weapons. There aren't many doubters there.... How can we be but frustrated? We have been waiting for 35 years for the liberation of Iraq."

And if there is no war? It doesn't bear thinking about. "We will be—so depressed," says Ali, the Kirkuk refugee. "We will be punished by the government of Iraq later on, there will be more atrocities. And we will never be able to go home."

Give Me The Tired, The Weary!