Waiting A Few Lanes Away 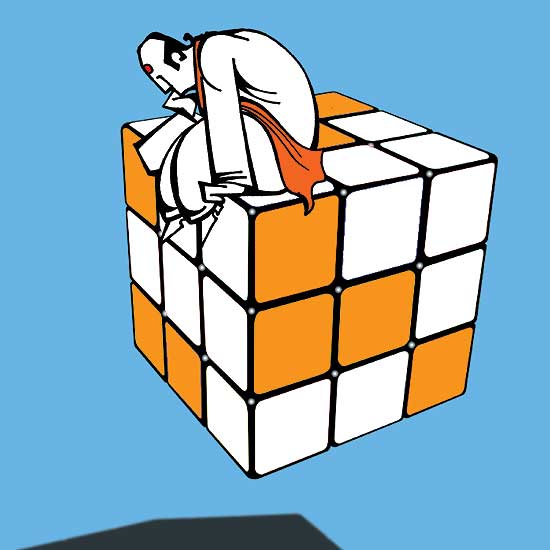 Why, in the run-up to and in the wake of the Ayodhya judgement, has the RSS chosen to operate through its variegated front organisations of sadhus and trishul-wielders and the rabble-rousing VHP rather than involve its political arm, the BJP? Observers would also have not failed to notice the sidelining of the party’s senior leader, Lal Krishna Advani, who has, since the 1990s, been inseparably identified with the Ayodhya movement, being in fact its very maharathi and one who stood watching as frenzied mobs razed the Babri Masjid in 1992. Advani, for his part, has  remained silent on the issue in recent months. So has Narendra Modi, not one given either to reticence or tactful moderation. The BJP, too, hasn’t galvanised itself for action; all it did was hold a core group meeting led by its president, Nitin Gadkari, at which a resolution was adopted, blaming judicial delay for the Ram temple not coming up till now at the site of the demolished mosque.

On the other hand, the front organisations—activities of such groups are always indicative of the larger intent of fascist forces when their main political wing maintains studied silence—were buzzing in the run-up to D-day, trying to drum up a religious frenzy and a vituperative anti-Muslim campaign. Floods of hateful SMSes. VHP leader Praveen Togadia’s tours and public meetings across the country. Organised chanting of Hanuman chalisa in thousands of temples to invoke the ultimate Rambhakt. Threats from sadhus like Vasudevanand Saraswati of Jyotishpeeth that there could be dire law and order problems following the verdict. VHP leader Ashok Singhal’s statement that the Supreme Court “saved itself” with its go-ahead signal for the verdict, implying the apex court’s judges were being cunning, rather than fair. The pacifism and magnanimity put on after the high court gave a favourable verdict were not much in evidence earlier.