Just call it brash. More in line with the inventive Channel V promos. The irreverence and insolence continues. But the plot is riddled with too many strands which often make it a jumpy ride. 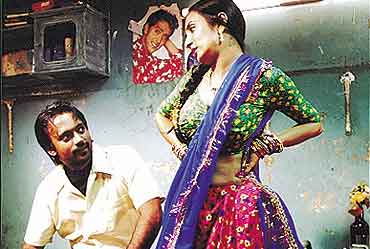 Just call it brash. Waisa Bhi Hota Hai Part II begins by sending itself up as a "mindless work of fiction" that has been "plagiarised from several films". But the inspiration from Tarantino or Coen Bros is not the real issue here. Waisa Bhi... is more in line with the inventive Channel V promos that built up the music channel (where Ghosh was a creative head) brand name by taking potshots at it, quite often lampooning it. The irreverence and insolence continues. The titles roll out to the tune of the ditty: "Laundiya ke pallu se gau ki boo aaye". And the opening sequence has a couple of goons talking about how it's difficult to associate mothers with passion and desire. Waisa Bhi... doesn't try to be consciously experimental like Boom and does have a definite story, only Ghosh tries to tell it differently. He gives a new narrative spin to the familiar tale of underworld goons with flashbacks, terse scenes, clever and, at times, profane dialogues, some cheeky one-liners and witty inner thoughts of his lead character.

Warsi plays Puneet Syal, a copywriter who is thrown out of his girlfriend's house after an argument. After continuously drinking for 16 hours, he finds himself caught in a shootout and ends up saving an injured henchman Vishnu (Narayanan). Which makes his hip and bohemian advertising reality coalesce with that of the rough and tough underworld. The film portrays an easy and believable bridging of the two worlds—there's a queer similarity between the two professions, both run on corporate principles. The goons remind Puneet of his banker friends: Kaam ke waqt kaam, baki time masti. The Internet-enabled don, Ganpat, has a laptop in his adda and a cosy together shot of PM and DPM on the wall. It's these little, brazen touches that work. The restlessness of Puneet, his cynicism with the city life and the urge to retire to Nainital ring a bell. And so does his friendship with Vishnu—they connect but not soppily so. Here's a dosti that doesn't need a Yeh dosti hum nahin todenge to sing about itself. But at times the emotions get too discreet and subtle, so much so that you could almost miss them. After his energetic debut in Tere Mere Sapne, Warsi delivers, like Narayanan. However, the plot is riddled with too many strands which often make it a jumpy ride. Ghosh leaves things open-ended. So do we then wait for the sequel, Waisa Bhi Hota Hai 7.5?