Pakistanis wish India well. Only the official-level vibes irk them. 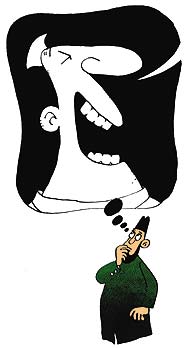 What do Pakistanis dislike about India? Actually, not much. Given the chance, most Pakistanis would love to visit India for a bit of shopping and sightseeing even if their idea of an itinerary is likely to be rather limited: Delhi, Agra and the holy city of Ajmer.

An Indian in the flesh is still something of a novelty for most Pakistanis. Which is why when they come across one, the odds are they would go out of their way to be friendly and helpful—a weakness Pakistanis tend not to encounter during their visits to India (somewhat to their surprise, I daresay, because they judge Indians according to their own notions of exaggerated sentimentality).

Taxi drivers have been known not to charge fares from Indian passengers. Shopkeepers in Lahore have been known to offer them discounts, although how long this philanthropy lasts when the novelty wears off remains to be seen. Similar behaviour in Delhi towards the odd Pakistani traveller has yet to be reported, a sign of the average Indian tradesman's more robust attitude towards business.

No, there is no dislike involved. Gone are the days when 'Crush India' was a popular slogan here, especially during the ill-fated 1971 war. Anything on similarly strident lines is more likely to cause embarrassment today. Pakistanis just find India—on occasion, I hasten to add—a trifle trying.

But we must be clear about what induces this reaction. Not the ordinary Indian wandering about in Lahore or the Sikh pilgrim visiting Nankana Sahib or Hasanabdal. He/she continues to be made much of. Official India as represented by its government is what is responsible for this sense of ennui and weariness.

Just as Indians start screwing up their eyes when they hear the word "Kashmir", Pakistanis react in much the same fashion when they hear the well-worn, and by now reflexive, phrases "cross-border terrorism" and its cousin "the infrastructure of terrorism". The Pakistan foreign office still tends to get a bit agitated by such charges—its senior officers could do with lessons in how to be cool—but the common Pakistani reaction is, "There goes India again". Furthermore, at least to Pakistani ears, India has come to resemble Israel in its take on "terrorism", a comparison hardly calculated to soothe Pakistani sensibilities.

After the recent Mumbai train blasts, the Pakistani government, true to form, behaved in a silly manner, offering assurances of cooperation where none were warranted (and none asked for). But even before India had decided whom to blame, Pakistanis knew what to expect: that even if there was no supporting evidence, they would be held responsible. When that is how it turned out—India blaming the usual suspects: Lashkar-e-Toiba, etc—no one was much surprised.

Pakistanis do not dislike India but they are at times puzzled by official Indian attitudes which they put down to Indian cleverness and to the 'bania' mentality, a concept they have received as part of historic folklore. No doubt Indians have similar stereotypes about Pakistanis—for instance, the lurking Indian view that all Pakistanis are somehow closet if not active terrorists.

So it should be no surprise if Pakistanis by and large are heartily sick of that exercise in futility, the 'composite dialogue'. Few people, apart from certified members of the love-India-at-all-costs brigade, have anything nice to say about the institutionalised stonewalling that seems to be the most important feature of this tortuous process. When the composite dialogue started after the joint Indo-Pak statement of January 4, 2004, the more naive sections of public opinion in Pakistan fell for the hype then being generated. They nursed the fond hope that there would be some movement, if not on Kashmir at least on such issues as Siachen, Wullar Barrage and Sir Creek. (The government for its part, on the basis of God knows what, entertained illusions about Kashmir.)

Even a minor success would have gone a long way to show that the composite dialogue was worth the effort, silencing critics and strengthening the peace process. But that is to under-estimate the Indian and Pakistani capacity for intransigence. As the pessimists had all along predicted, nothing has come of the composite dialogue. So when India all too predictably blamed Pakistan for the Mumbai blasts, as a follow-up to cancelling the foreign secretary-level talks scheduled for July-end, a collective sigh of relief could be heard rising in Pakistan. The feeling was that if nothing else this setback would put an end to the Pakistani policy of unilateral concessions to India.

Perverse perhaps, but in the circumstances only to be expected, the futility of the dialogue process is fuelling this display of cynicism.

It is worth remembering that Gen Pervez Musharraf has come in for fairly heavily criticism at home for his often incomprehensible overtures to India. He has even gone so far as to downplay the importance of the UN resolutions on Kashmir—the basis, after all, of Pakistan's position regarding the dispute—with nothing much to show in return. Pakistani patience is put to the test by a few other things as well. "Shining India" may not be a subject of much interest to the ordinary Pakistani but by now it is a weapon certain to terrify a Pakistani visitor to India.

The parade of the usual statistics of how India is performing in the IT sector, of how much energy it is guzzling and how much more it is going to need in future, and how it is destined to become one of the players in the big league, is something, alas, he has heard before, often at great length. His alarm is understandable when he sees the same volleys about to be fired off again.

This is not to say that Pakistanis don't wish India well. They sincerely do. But they do feel that upwardly mobile Indians could protest a bit less about India's economic achievements.

Pakistanis are surprised when they see Indians bristle at the slightest criticism, say, about Kashmir, the extent of Indian poverty, outbreaks of communal violence as in Gujarat in 2002 or the armed insurgencies raging across large parts of India. Mention these subjects, and often informed Indians go red in the face (preparatory, it almost seems, to an apoplectic fit). Pakistanis, very open about their own national problems, find this attitude baffling.

And Pakistanis can't help rolling their eyes when another prophet of goodwill from across the border, becoming sentimental and quoting some scrap of poetry, suggests that the border between the two countries is irrelevant and that Indians and Pakistanis are basically one people. Time was when Pakistanis were startled by such outbursts. Now they simply respond with a shrug of their shoulders.