Wage A War To Win Your Peace

The Constitution, not the Hindu Right, grants the Muslim his place in the country. It's his Indianness he can use as a weapon of assertion. 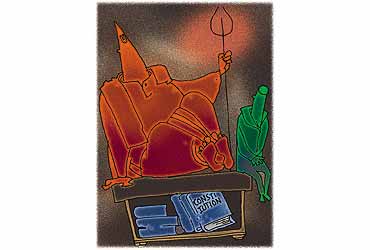 outlookindia.com
-0001-11-30T00:00:00+0553
Milesburg, Pennsylvania: The proximity of surplus and tawdriness in a bus terminal—potato chips, bottles of Coke, a gambling machine, and a large lavatory all in reach of each other. Two days ago, a co-passenger on the Greyhound from New York had told me grizzlies live here. I had given my talk at Penn State University, and was waiting for the Greyhound to New York.

The bus arrived, half full. People, some of them travelling for 12 hours or more, disembarked and dispensed with urgent needs. Among those who had alighted I noticed a dark man with thick glasses who was obviously from the subcontinent. The man, finishing his cup of coffee, seemed far more at ease in the bus terminal, which felt to me not only foreign but metaphysically alien, than I was. The friend who had invited me to Penn State said I "cultivate discomfort"; I couldn't say the same about this man.

There was nowhere on the bus you could sit by yourself. Among the doughnut-eating representatives of various races, I chose the neighbour that seemed the most focused but the most amenable; I sat next to the bespectacled man. Mr and Mrs Iyer, Aparna Sen's new film, offers the insight—perhaps it forces it upon us—that we never quite know whom we might sit next to on buses. Although my acquaintance with my neighbour was not as momentous as the one made in the film, it echoed, tangentially, some of its tensions. The Greyhound left Milesburg; after a few minutes, my companion asked: "Which country are you from?" "India," I said, expecting the smile of approbation. He looked abstracted; then said, "I am from India as well." He came from Hyderabad. I told him that, oddly, I had, on my way to Milesburg, met another Hyderabadi, a software engineer. He nodded: "There are many here from Hyderabad." Quickly, he told me his name. "I am a Muslim," he said, as if the name were a fact that needed interpretation.

In the next 15 or 20 minutes, he told me about his childhood; this unfolding of the personal happened quite naturally. He had faced prejudice since he was a schoolboy; his class teacher had said to him during the Bangladesh war, "It's people like you who are responsible." Even here, in America, he knew of friends who had been denied jobs by Hindu interviewers.

"I suppose you will never go back," I said. This seems to me a measure of the hopelessness of India; that no one wants to come back. "Oh no, I will go back!" he said. "My children are growing up here, but India is my country. I will go back and fight!" We discussed this for a while—how does one fight? Gloomily he added, "There is no leadership for Muslims in our country."

This is, of course, a problem, a lack, that is cited regularly. (There is actually no leadership in the country at present, Muslim or Hindu, and our Hindu leaders are more the products of the politics of power-brokering than of innate qualities of leadership. But that is another matter.) Is it absolutely necessary, though, for a minority to have a leader? England, which I first visited in 1973, and where I lived from 1983 to 1999, has made the transition from an utterly racially-divided society to a multicultural one more successfully—despite the persistence of racial violence in deprived areas and despite institutional racism—than any other European nation. How was this achieved? Certainly, the Asians and the blacks had no outstanding leader, no Martin Luther King. Instead, the second-generation immigrants organised themselves, and became aggressive with strategic intent. They didn't expend energy on fighting for their "difference"; they seized, from their opponents, the initiative on what defined 'Britishness'. When their opponents said, "Go home" (and we know the charge of foreignness and disloyalty is a charge brought against minorities by all right-wing parties), when faced with this imperative, they said, "My home is Leicester", or "My home is Bradford".It was a simple irrefutable argument. "I'm British," they said, and demanded the inalienable right of the British citizen to live in his or her own country in peace. The 'Britishness' that was thrown at them as a challenge became, redefined, an extremely potent counter-reply to the racist.

This is what Muslims in India must learn to do: to speak with the voice of the citizens of a democracy, to be aggressive not with the hysteria of the cornered, but with strategic political intent. I don't mean that Muslims need to demonstrate their 'Indianness', or prove their allegiance, or hang an Indian flag outside their window as terrified Afghans raised the American flag outside their homes after September 11. I mean the Muslims need to use their 'Indianness' and citizenship as weapons, provided them by the Constitution, against the right-wing Hindu. The latter punctiliously reminds the Muslims of their duties as Indian citizens; it is part of a larger, subterranean conversation. The Muslims, in turn, need to remind the right-wing Hindus of their rights as Indian citizens (the rights of the citizen have always been strangely sublimated in India, except in the case of the affluent few, and the Muslims' hesitancy with emphasising their citizenship has not only to do with their Muslim identity, but the fact that most of them are poor.) It is not for the Hindu, or for that matter the prime minister, to say, when he is in the mood, that the Muslim too has a place in this country; the Constitution already grants the Muslim that place as it does the Hindu. Under the Constitution, the ordinary Indian Muslim has exactly the same rights as the Indian Prime Minister; it is presumptuous, not to say deliberately obfuscatory, for the prime minister to promise to be accommodating to the Muslims; it is wrong for the Muslim to wait for, or be satisfied with, such promises. It is time Muslims seized the initiative, and replied with the argument of 'Indianness' rather than cowered beneath it; it is time they used the legitimate aggression—not energy misspent in fatwas, or tit-for-tat ripostes, or explanations—that the Constitution grants them. The aggressiveness with which a citizen in a democracy must defend not only his religion and his family, but his rights, is, in India, largely misplaced or unutilised.

Our liberals, too, haven't done enough. The reportage has been exemplary; but the dialogue has been a dialogue among like-minded people. We share our living spaces with people—the person who cooks the food; the man who drives the car—who often have radically different views from us. (The man who drives my father's car, much-loved in the family, is rabidly anti-Muslim.) In theory, we know the political choices these people make matter more than ours; in everyday life, however, we believe they are politically insignificant or irrelevant. That is one of the reasons why we never engage them in a dialogue; the other reason is that they are not our equals. Social inequality robs liberalism of its power, and confines it to an island. We grow used to living on the island, and confuse it with our country. We actually seldom step off it. The white liberals from various classes who comprised the anti-Nazi League in England in the Seventies didn't just write about and criticise the neo-Nazis; they went out into the streets and confronted them.

It's possible, of course, that right-wing politics will self-destruct. Why do the bjp, and Vajpayee, and even Advani, say one thing today and another the next; sound unforgiving now and tolerant later; subject 'Hindutva' to constant reinterpretation, so that it embraces completely contradictory meanings? Many reasons have been offered for this behaviour; the toing-and-froing reminds me of the vacillations of the addict's relationship with the dangerous substance he is dependent on.The substance, in this case, is 'Hindutva.' Vajpayee uses 'Hindutva' because it gives him all his short-term benefits; he fears it not because it might harm others, but because it might recoil upon him. This characterises the addict's dependence on, and ambivalence towards, the problematic substance. History shows us that those who play with politically dangerous substances incur both gains and fatal losses. We have seen how Mrs Gandhi's domestic policy of toppling elected governments, in creating Bhindranwale, eventually killed her; we have seen how American foreign policy authored, in part, September 11. If history is anything to go by, Hindutva's final casualty might be its proponents.

I discussed some of these things that day with my companion. He got off at Newark and, though he gave me his card, I didn't see him again. When I said to him I made my living from writing, he said, "You must write about this." I don't know if he'll return to his country to "fight", as he put it, but my memories of England teach me that peace does not come with good intentions or even the provisions of a liberal democracy; we must struggle for it with courage and cunning.

(Amit Chaudhuri was recently visiting professor at Columbia University. He has won the Sahitya Akademi award 2002.)