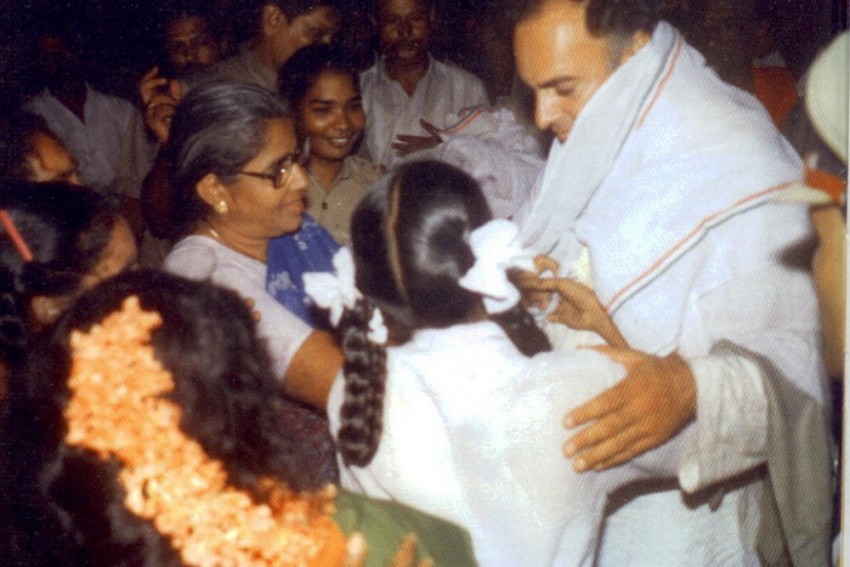 May 21, 1991: Rajiv Gandhi at Sriperumbudur, moments before his death. Dhanu, wearing orange flowers in the foreground, is the would-be assassin.
Neena Gopal August 18, 2016 00:00 IST VP Govt Knew Of Rajiv Plot? 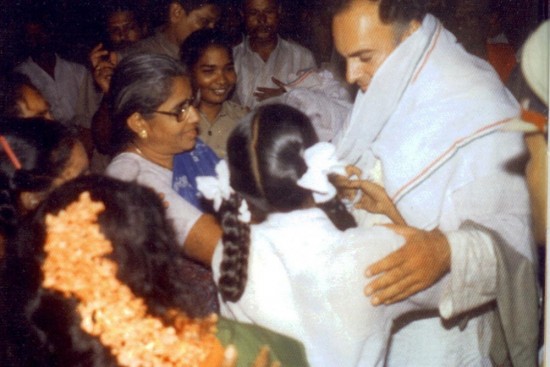 Of the hundreds of intercepts between the thirty-­eight or so Tamil insurgent camps in the Nilgiris in India and their cohorts in Jaffna, Sri Lanka, almost every single one centred on arms shipments and gun­­running between Vedaranyam and Point Pedro, barely 18 kilometres from coast to coast. But no intercept would be as chilling as the kill order that came through in short bursts of VHS communication on a frequency that the LTTE favoured that April day in 1990.

When it was intercepted, it set off alarm bells among Tamil insurgents ranged against the Tigers, their numbers already worn thin by the LTTE’s targeting of their cadres and top leadership. The intercept, in Old Tamil interspersed with English used by the Jaffna Tamils—and largely incomprehensible to Indian Tamils—only added to the confusion that hung over the all-too-brief radio message.

‘Dump’. That particular term came into use when the LTTE began to ruthlessly eliminate Tamil civilians who resisted their fiat and ‘dumped’ them in pits across Jaffna. It was another way of saying ‘kill’.

But the difference was that the order was not to eliminate one of their own. The target was the former Indian prime minister, the leader of another country. When PLOTE leader Siddharthan Dharmalingam first heard it, he was so alarmed, he immediately tipped off the head of IPKF’s Counter-Intelligence (COIN) in Sri Lanka, Col Hariharan.

A native Tamil speaker with an inside track into the Lankan Tamil narrative, Col Hariharan was greatly helped in his task, he says, by having an aunt who was married to a Jaffna native. It was Col Hariharan—one of a handful of Indian operatives with his ear to the ground and an understanding of the Tigers’ mindset—who recognised its true import.

“Whether the intercepts were not clear enough, or were not taken seriously by intelligence mandarins who received them, is not known.”

But it didn’t fly. Whether it wasn’t specific enough or clear enough to warrant immediate action, or was simply not taken seriously by the intelligence mandarins to whom the information was passed on, is not known. Either way, India’s intelligence agents were unequal to the task of reading the threat for what it was—a death sentence passed by the LTTE, an insurgent group nurtured by India, on India’s former premier.

“Even when Rajiv Gandhi was the prime minister, the RAW had drawn attention to the likelihood of a threat to his security from the Sri Lankan Tamil extremist organisations. It repeated this warning after he became the Leader of the Opposition,” says B. Raman, head of RAW during 1988-94, in his eye-popping memoir, The Kaoboys of R&AW. “These warnings did not receive the attention they deserved because they were based on assessments and not on specific intelligence,” he writes.

Except, this particular intercept was as specific as it could get. Prabhakaran’s ‘handler’ when the LTTE leader was in India, Chandran, is pushing 85, but remembers the intercept as clearly as though it were yesterday. He recounts how everyone misread the signals—not just his men, but also agents from the IB who were tasked with monitoring the threat posed by Lankan Tamils residing in India, who had to trawl through hundreds of messages that went back and forth.

Chandran, additional secretary in the cabinet secretariat and in charge of RAW in Sri Lanka, was sidelined once the Rajiv Gandhi government fell, and his years of cultivating the Tamil militants came to nought.

“By that time, the government had changed. Nobody wanted to hear what we had to say anyway. And I had been shunted out,” he said.

“The IB and RAW didn’t agree on much. If we had read the signals right, if we understood what was going on in Prabh­akaran’s mind, who knows, we could have prevented this. It was our fault, we made a huge error of judgement. We misread Prabhakaran. We never believed he would turn against us in this manner. We should have seen it coming. We didn’t. We failed Rajiv Gandhi, we failed to save his life,” he said, emotional and close to tears as he spoke to me from his office in New Delhi.

“Both Siddharthan and Hariharan say if the tipoff was acted on with the seriousness it merited, history would have taken a different course.”

Twenty-five years later, neither Siddharthan nor Col Hariharan remembers more than this particular part of the intercept. But both say that if it had been taken on board, and acted on with the seriousness such a tip-off deserved, history would have taken a different course.

It was brought to the notice of Siddharthan (now a Tamil National Alliance MP in the newly elected Sri Lankan Parliament) by an alert Jaffna Tamil in his employ who monitored radio communications bet­ween Tamils on the Indian mainland and Jaffna. The PLOTE leader, in turn, alerted Col Hariharan, who served in Sri Lanka from August 3, 1987, to June-July 1990 and was reaching the end of his tenure.

At one time, the LTTE was the predominant force in the RAW-run training camps in India. Col Hariharan, who had a small army of Jaffna Tamils keeping an eye on the LTTE for him, says he was taken aback when he was given the cassette to listen to and, from what his codebreakers told him, was alarmed enough to warn India’s IB that a plot was afoot to eliminate Rajiv Gandhi.

This was a full year before the suicide bomb blast claimed the former prime minister’s life.

“It was the first time we heard any mention of Prabhakaran taking vengeance against Rajiv Gandhi,” Siddharthan said, qui­ckly correcting himself after having first used the word ‘revenge’.

But the warning—albeit tenuous and imprecise—instead of being investigated, was laughed out of court; it was simply set aside and forgotten.

It wasn’t the only warning that wasn’t fully investigated. In his book, Raman talks of another alert, this time from German int­elligence, about the repeated visits of a Sri Lankan Tamil exp­losives expert and an LTTE sympathiser to Madras. But it was not sufficiently probed by the IB. Instead, it ignored the warning on the grounds that the Lankan Tamil wasn’t an explosives expert, and remained curiously blind to the question of what the man was doing in Madras in the first place.

In 1990, LTTE had the upper hand. PLOTE’s founder, Mahes­waran, had co-founded the LTTE with Prabhakaran in 1976. But by 1982, the two had fallen out and almost killed each other in a public shootout in Madras. Maheswaran went on to found PLOTE but was murdered in broad daylight on a Colombo street in 1989.

PLOTE made every effort to stay one step ahead of the main person of interest at the time—their main enemy, ‘Baby’ Subramaniam, the LTTE commander operating out of Tamil Nadu. Subramaniam was the LTTE’s point-person to eliminate all challenges to his chief, Prabhakaran.

“Subramaniam was the darling of Tamil Nadu politicians and knew exactly how to keep RAW and everyone happy while doing exactly what Prabhakaran wanted him to do,” Siddharthan tells me. The intercept may have been to Subramaniam from someone speaking on Prabhakaran’s behalf. Together with other LTTE leaders, like the intelligence chief Pottu Amman and the deputy head of the women’s wing, Akila, Subramaniam was closely involved with the planning and execution of the plot to kill Rajiv Gandhi.

Even though the Indian army was making tracks for home, Prabhakaran was relentlessly whipping up anger against the IPKF, blaming them for exc­esses against civilians.

This single burst of chatter should have alerted the then V.P. Singh government and, subsequently, the Chandra­shekhar government, to restore the Z security that Rajiv Gandhi used to have before he lost the prime ministership. Opposition leader or not, he was on the hit-list of the Khalistanis, and warranted more than the negligible cover he had been provided.

Bullet For The Excess