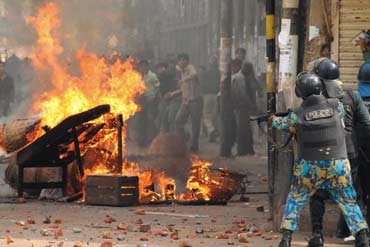 outlookindia.com
-0001-11-30T00:00:00+0553
Bangladesh's democracy stands perilously at a crossroads, gasping for breath in the looming confusion. Barely a fortnight before the nation elects its 9th parliament on January 22, President Iajuddin Ahmed declared a state of emergency, suspending political and civil rights and imposing nationwide daily curfew from 11 pm to 5 am till further orders. Pitching the situation closer to a full-scale constitutional crisis, on Thursday evening he resigned as chief advisor to the interim government—a post that virtually granted him full executive powers. The rest of his 10-member advisory council too stepped down, with its seniormost figure, Justice Mohammed Fazalul Haque, stepping in as the acting chief advisor.

Such desperate measures, with the army standing just beyond the field of action, cannot restore to the general election the credibility that stood eroded the moment the Awami League-led mega alliance decided to boycott it.

The president's move is aimed at countering the agitation AL has announced against the polls, beginning with a non-stop siege around the Bangabhaban presidential palace from January 14 and countrywide blockades on 14, 15, 17 and 18. Then a two-day nationwide strike beginning January 21 to coincide with the voting. Thereafter, AL leader Sheikh Hasina warned, the stoppage would continue indefinitely until the election, if held, is annulled. In response, Bangladesh Nationalist Party (BNP) chief Khaleda Zia said, "It (the election) must be completed on January 22. Give poll-boycotting parties a befitting reply so that they never come to you to seek votes."

BNP's insistence on adhering to the poll schedule has dramatically enhanced the possibility of army rule. The forces are already out in the streets to ensure protests don't spiral out of control, weeks of political instability have reignited memories of the tumultuous years between 1975 and 1990 that were racked by coups and counter-coups.

As Bangladesh's democracy wonders what each of these presages for its future, there's consensus here that it's Iajuddin who's to blame for its deplorable plight. Elected president by BNP lawmakers, he has been accused of being a Khaleda 'puppet', brazenly flouting the legal requirement of neutrality he's expected to maintain as head of the caretaker government, responsible for overseeing the general election. From the time the Khaleda government bowed out of office on October 28, Hasina had been pressing, inter alia, for removal of certain election commissioners and clearing of bogus voters from the electoral list. Otherwise, she said, the AL-led alliance wouldn't participate in the election. She wasn't the only one to voice her lack of confidence in the president. Four of his advisors from the 10-member council, appointed to assist him in his role of chief advisor, quit over his decision in November to call in the army for quelling the protests of AL activists.

The president had then played the army card to browbeat Hasina during protracted talks for poll reforms. But she held her ground, apprehensive that she stood little chance of returning to power in an election process geared to favour Khaleda. Nor was the army proactive, keeping its presence in the street to a bare minimum. This stance was again visible during the January 7-9 AL-sponsored nationwide road, railway and waterway blockade that witnessed violent clashes between police and pickets.

Many think it's heartening to see the army keep a 'safe distance' from street clashes, a sign of its growing maturity in a democracy still young. Yet the same people ask: for how long will the army play this game of patience? Nadeem Qadir, a freelance journalist who's covered the army extensively, says the military will have to take a role that might be a brief setback for democracy. "Where do we go when all options are out?" he asks.

Imtiaz Ahmed, a professor of international relations at Dhaka University, too feels army intervention is a possibility. "Have a one-sided poll, and the country will move towards violence," he says, claiming such an election would be suicidal for the country. "There is already a consensus against such an election. Nor will it be accepted internationally."

The professor feels the political crisis has left the army in a dilemma. For one, it risks sullying its reputation, earned over the past 16 years after the fall of military dictator H.M. Ershad in 1990, should it support the January 22 election and the new government. The flip side is that an army takeover could adversely affect its UN peacekeeping duties—a source both of prestige and foreign funds. Ahmed, therefore, suggests the army putting pressure for resolving the crisis politically, since the crisis is political. "But if the crisis can't be solved, they can be forced to take over power with a signal from international communities that they wouldn't mind it and its peacekeeping duties would not be hampered, as has happened in Thailand."

But is the fear of widespread violence realistic? Yes, says advocate Sultana Kamal, one of the four advisors who resigned from the caretaker government in November. Violence is inevitable because democracy is under threat, she says, adding, "If the present situation continues, the crisis will worsen and the ongoing efforts to restore democracy will become difficult." Kamal admitted to speculations about army rule. But this need not alarm people because the army's mindset has changed. As she told Outlook, "It should be kept in mind that the army showed restraint since the beginning of the existing political crisis. In the past we have witnessed army excesses on people. But we haven't seen yet any such incident this time."

Partly Bangladesh's problem arises from the gradual erosion of its public institutions, and perhaps the only solution to this malaise lies in hoping for a leadership reminiscent of Sheikh Mujibur Rahman. The current crop of leaders doesn't measure up to these exacting standards. As leading finance advisor Shoeb Ahmed told a TV talk show, had the Election Commission been made independent as in India things might have been easy. The Daily Star newspaper noted, "It appears that both the alliances, in their bid to derive political mileage, have lost sight of the most important factor, the interest of the country and its people." And that means the two grand ladies of Bangladesh politics understanding that being voted in and voted out is a sine qua non of democracy.