Voices Over The Net

Internet telephony will bring down charges, but quality suffers 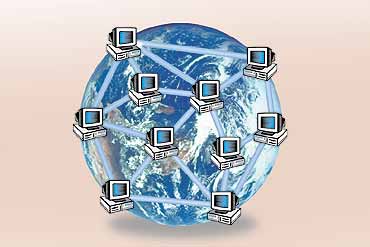 outlookindia.com
-0001-11-30T00:00:00+0553
Come April 1, you will be able to talk to your cousin in New York through the Internet for loose change. Last fortnight, the government announced it will allow Internet telephony and Voice over Internet Protocol (VoIP) from April. This means anyone will be allowed to send voice in any form over the Internet. And over the Internet, the cost of your international calls will come down to local call levels.

Internet telephony's been allowed in three categories: PC-to-PC within India or outside, PC-to-phone overseas and Internet Protocol (IP) phone to IP phone anywhere in the world. An IP phone is like a PC with a modem to transfer voice signals via the Net.

Internet telephony was not allowed till now so as to protect VSNL's international long-distance monopoly. However, it thrived illegally with the government unable to do much since it's next to impossible to monitor clandestine usage of such services.

Since Internet access is at local call rates, it eliminates long-distance charges. Consider this: a three-minute call to the US at current rates would cost at least Rs 150. The same call, if routed through the Net, would cost well under Rs 10, taking into account Internet charges, local call charges and price paid to the Net telephony service provider. For people accessing the Net through a cable or digital subscriber line (DSL) with flat monthly access charges, it could be even cheaper.

Other VoIP benefits may include new applications like web-enabled call centres, remote telecommuting, follow-me services where one phone number is accessed worldwide via the Net, and unified messaging.

But don't jump to it yet. Low charges may be the only thing to rejoice about. To begin with, the quality of voice will be far below levels we are used to. Says Amitabh Singhal, secretary, Internet Service Providers Association of India: "According to global standards, any voice transmission delayed beyond 250 milliseconds is not of toll quality. Net phone calls mostly fall below that limit."

Add to that a considerable amount of echo, resultant overlap and distortions as the facility is not duplex (two people can't talk at the same time). A lot also depends upon Net traffic at the time and the Net speeds of caller and receiver. With average dial-up speed in India a mere 28.8 Kb per second, the quality of calls can be quite poor.

A bigger problem is the absence of a universal standard. This means that the call doesn't happen if the caller and receiver don't use the same software. The two most popular standards are H.323 and SIP. Initially, even mobile telephony faced this problem till GSM became the globally accepted standard.

Yet, India's Internet Service Providers (ISPS) are upbeat, geared up to start services immediately. Says Ashok Juneja, CEO, Mantraonline, the Bharti-owned ISP: "We'll be ready from day one. We have a full suite of services ready." Others like Net4India, iServ and Satyam Infoway are also gearing up to move as soon as the gates are opened.

But what kind of a market does India have for Net telephony, especially with PC and telephone penetration so low? Optimists say with its recent telecom initiatives, India will be the fourth-largest Net telephony market in the Asia-Pacific by '04, after China, Japan and South Korea. A report by global IT analyst International Data Corporation predicts the Indian IP telephony market will grow at a compounded annual rate of 119 per cent to reach Rs 13,000 crore by 2005. Agrees Dr Elon A. Ganor, chairman, Vocaltec Communications, a company specialising in the technology: "VoIP is the next revolution in telecom. Total legal ILD traffic in India is about 3 billion ILD minutes now. By 2006, we should see 30-40 per cent of ILD calls routed over VoIP."

But, says Jasjit Sawhney, CEO of Net4India: "Low PC and Internet penetration are still stumbling blocks." Singhal also cites the fact that migration from the conventional system is yet to happen worldwide. Says he: "Net telephony constitutes just 4-5 per cent of global voice."

Experts feel today's telephone system will eventually give way to a new Net-based network carrying voice, data and video at high speeds. But don't expect those telephone poles outside your place to go soon.