Voices From A Brick Kiln

Abused and treated as bonded labourers for long, the Irulas are standing up for their rights 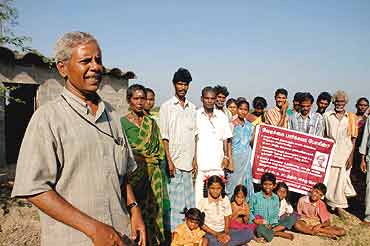 With the Vijaya case, Prabha realised that the Irulas were subjected to harassment by their employers as well as civic and police authorities. And unlike the Dalits who were a political and numerical force, the Irulas were on the margins. The tribe, traditionally rat- and snake-catchers, have often been featured in exotic foreign documentaries. But today, they are predominantly employed in rice mills and brick kilns in Cuddalore and Villupuram districts. Only 12 per cent of them are literate. "They are almost like bonded labourers. The work itself is dangerous and physical abuse at the workplace is rampant," says Prabha.

He soon realised the Irulas needed an organisation to take up their cause. The Pazhankudi Irular Paadukappu Sangam (PIPS) was formed in August 1996. Its primary focus is to see that the Irulas get justice, are not subject to harassment at the workplace and their lot is improved. The organisation also runs educational camps in summer and publishes a community newsletter. Their efforts have led to the setting up of a government residential school for Irula children. The organisation is also considering setting up its own kiln and running it as a cooperative.