Locked and forgotten for 40 years, the Nizam's ex-wife restores the Asif Jahi Chowmahalla for Hyderabadis 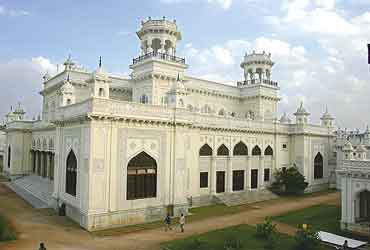 Until its grand reopening this weekend, Hyderabad's crumbling Chowmahalla was just another pathetic metaphor for the demise of one of India's wealthiest royal houses, the Asif Jahis, better known simply as the Nizams of Hyderabad. It had been locked and forgotten for decades, tucked away in the bylanes behind the Charminar. Today, the clock has been turned back for this regal complex of palaces, thanks to a massive dose of restoration, stretching over five years.

With the sprawling 45-acre estate encroached on all sides by hungry land sharks and the once-ornate interiors stripped clean by greedy caretakers, it seemed the rot was impossible to stem. That was until Princess Esra—the first wife of the much-married present Nizam, Barkat Ali Mukkaram Jah—stepped into the picture. The aristocratic Turkish-born Esra Birgin and Jah went through a bitter separation more than three decades ago, but in a surprise move in 2000, Jah gave her and their son Azmat legal charge over all his assets. Jah was believed to be heavily indebted to Esra after she used her influence to force their children to withdraw a case claiming their father was mentally unfit to manage his own affairs.

The legal charge led to a flurry of activity to try and put the chaotic Nizam's estate in some order. One of Esra's first decisions was to start renovating the Chowmahalla to open it to the public again. "Even though I haven't lived here very much, I have a great fondness for Hyderabad and felt it was time to give something back to the city," Esra told Outlook. Her sentiment has raised several eyebrows as it's in sharp contrast to the trend set by Jah who within a few years of his coronation in 1967 chose to abandon his Hyderabadi legacy and translocate to a sprawling sheep station in Australia. The man believed to have inherited one of the world's largest and most fabulous inheritances spent some US$70 million over 25 years trying to make a life for himself in Australia before debt and ill-health forced him to move to Turkey. The reclusive Jah's decision to 'abandon' Hyderabad eroded most of the goodwill the Nizams had traditionally enjoyed amongst locals. They watched his estate sink into financial chaos and his various palaces crumble right before their eyes. "There were parts of the palace where there was nothing left, no walls, no roof, just the base of some columns," says Ajay Mirajgaoker of Rahul Mehrotra and Associates, the Mumbai-based architects appointed to work on the restoration of the Chowmahalla. He says the restoration was executed with diligent allegiance to old photographs and memories of people who had seen the palace in its heyday.

The first of the Asif Jahi palaces, the Chowmahalla was started by Salabath Jung in 1750. Successive nizams added to it over time, making it a collection of varying styles of architecture. Besides four main palaces—as the name Chowmahalla suggests—the complex includes the double-storeyed Khilwat Mubarak or the Durbar Hall. Adorned with elaborate stucco work and 16 gleaming chandeliers, this open durbar was used for regal ceremonies including coronations and receptions of viceroys and other important guests. It also housed the heavily ornate official banquet hall, with dinner services that ran into thousands of pieces and gleaming chandeliers that climbed four to six-storeys. While the interiors were systematically cleaned out over the years, aggressive encroachment around the complex itself has left only 12 acres of the property within control of the family today.

Working on its restoration was a special experience, say people involved with the project. "All other palaces of this period have either disappeared or been converted into hotels. Here was a chance to work on a unique dream to create a centre for living culture," says culture-conservation guru Martand Singh. The sprawling lawns of the reopened property will host regular poetry reading, dance, music and qawwali sessions. There will also be temporary exhibitions of the Chowmahalla collection, which includes rare photos, textiles, ceramics and a considerable collection of arms, all recovered in the complex. The inaugural shows include an embroidery demonstration by 30 craftspeople, a textile exhibition, and a display of 97 rare, never-seen-before photos found locked up in trunks. In all, 4,200 photos were recovered, some of exceptional historical importance.

However, cleaning out the royal mess was a staggering task, says INTACH's Shobita Punja who worked with the team photographing, restoring and cataloguing all the objects found in the sprawling complex. "There were things that had never been touched or cleaned since the palaces had been locked. Everything, including the trunks, was covered in layers of dust and we had to tie scarves around our faces before getting to work," says Punja.

Esra won't say how much the restoration and clean-up cost but it's estimated to have run into several crores of rupees. "We have all put in our own money. The restoration has been paid for by the personal income of the Nizam and the family," says Esra. But given Jah's string of litigations and reports about the precarious state of his finances, there is much speculation about the long-term viability of the project. However, the family hopes the sale of tickets from visitors will pay for the upkeep of the palaces. Meanwhile, Esra has renewed her standing offer to the government to use the Chowmahalla as a permanent venue for the exhibition of the Nizam's Jewels, locked up in the vaults again after exhibitions in New Delhi and Hyderabad that drew huge crowds in 2001.

The Nizam's family says that as the jewels were originally housed in the Chowmahalla, it would only be appropriate to permanently exhibit them there. However, others feel the family forfeited any claim to be associated with the jewels after it had planned to hive off the collection to the highest bidder in 1995. Auctioneers Christie's had valued the collection at £135 million and people like the Aga Khan, the Sultan of Brunei and shipping tycoon Stavros Niarchos had reportedly shown interest. However, a Supreme Court intervention kept the collection from leaving the country. It also allowed the Indian government to acquire the jewels for a much more modest Rs 218 crore.

Meanwhile, in the crowded galis around Chowmahalla, there is much excitement about the reopening of the palace. The other famous palaces in the city all remain out of bounds—the Purani Haveli has been turned into an educational institute; the King Kothi, the residence of the seventh Nizam, is in a shambles; and the keys to the Falaknuma have been handed over to a prominent hotel chain. "This is a city of palaces, yet we had nothing to show for it," says Narendra Luther, a former bureaucrat and author of several books on the Nizams. "This was long overdue, but at least it's better later than never."