The King of Chess has surpassed Bobby Fischer and equalled Garry Kasparov’s four Chess Oscars in ’05. 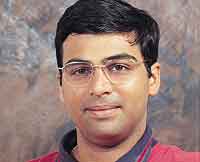 How do you react to Kasparov's retirement from professional chess?
He reached a point where he did not want to play tournaments. His retirement was not unexpected.

Will you then top the FIDE ratings by default?
I should be number one by January 2006. But that's not on my mind at all.

Would it have been more satisfying to wrest the position when Kasparov was active?
Absolutely. I am, however, first keen on breaking into 2,800 points, then 2,810.

Will the world championship unification become a simpler procedure now?
Not really. Kasparov was hardly the obstacle.

Tennis, F-1 and squash have caught media sponsor attention. Is chess suffering?
When I first watched F-1, I didn't know a single driver but it was still exciting. It's a novelty to have an Indian racing F-1.

Is chess perceived as unglamorous?
In chess you don't easily see what's happening. Modern technology can be used to break these barriers. Rapid chess must be encouraged.

Why has India not thrown up players of your class at the international level?
P. Harikrishna and K. Sasikiran are in the top-50.

How much of your year is spent travelling?
I spend 2-3 months in Chennai. Rest of the time, I am based in Spain and play tournaments.

Many more years of competitive chess?
I'll know when it's coming to an end.