From Maqbool to The Blue Umbrella—the director and music director caught in a shower of questions. 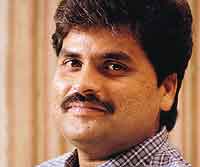 outlookindia.com
-0001-11-30T00:00:00+0553
What is the story of Blue Umbrella?
A small girl trades her locket for an umbrella. And her entire village wants the umbrella. It disrupts the harmony of the once-idyllic village.

Is it true that you're contemplating a Hindi title, Chhatri Chor?
We're undecided whether a Hindi title will hold more appeal for the audiences.

Why did you choose a Ruskin Bond short story—paucity of original matter?
I'm a screenplay writer who needs a good story to work on. I don't shy away from a literary source; it's better than copying a Hollywood film.

Makdee, Chhatri Chor, you seem to be fascinated by children's films.
Yeah, I still haven't grown up.

You seem very fond of Pankaj Kapoor too.
Pankaj plays a 60-year-old kid in the film. A fine actor, he'd have done well in Hollywood.

What's more difficult—a simple children's film (Makdee) or a complex one (Maqbool)?
It's very difficult to be simple and it's very easy to be difficult. Shakespeare's stories are simple but they have layers.

Composing music or directing a film?
Directing. Later I can hire myself for the music.

Your father Ram Bharadwaj was a lyricist. Will you follow suit?
I'd rather pay a lyricist who writes better than me.

Your future projects?
Mr Mehta And Mrs Singh with Aamir-Kareena.

You're a cricket buff. Your take on the Chappell-Ganguly drama.
Ganguly should have stepped down long back.