Tata's new three-boxer rests on an Indica platform. And you get to be nice and comfy in the backseat. 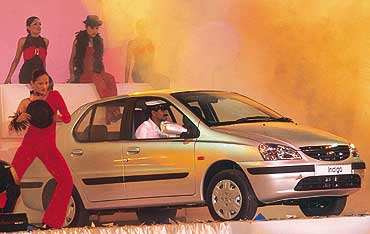 outlookindia.com
-0001-11-30T00:00:00+0553
The media launch of the Tata Indigo in Pune on December 16 brought into focus a simple fact. The third largest-selling three-box sedan in India in the last few months has been...the Ambassador, with 1,000-1,200 units sold every month. And not just government and taxi sales either. Even Amitabh Bachchan told Autocar India not too long ago that his favourite car for the slog overs in moviedom would be the half-a-century-old Morris Oxford. Reborn as the Ambassador 1,800 MPFI, with Japanese engine and AC. The Indigo, therefore, apart from more modern competition, had to factor in this veteran challenger.

The formal launch in Mumbai on December 18, with the price declared at between Rs 4.35 and Rs 5.2 lakh for the five variants—three petrol (85 bhp) and two diesel (62 bhp)—brought another simple fact into focus. That Indian automobile manufacturing was no longer only about screwdriver/CBU and CKD/SKD routes. It was also about "in India" design and development.

So how will the Ford Ikon, Hyundai Accent, Opel Corsa and Maruti Esteem, and even the Ambassador, compete with the Indigo on price and product? The Ambassador is Rs 4 lakh territory, the others are at

Rs 5 lakh and above. Says Vinay Piparsania of Ford: "We have achieved a localisation of over 90 per cent on the Ikon, making it a true-blue 'Made in India' car of world-class quality. Given that the Tatas are pitching it on a pricing strategy, they will no doubt create an initial stir. But I do think that the dynamics of the profile of mid-size car consumers is very different from small buyers. They want to move up to something bigger, with greater style and luxury."

But why would anybody buy a Tata Indica, pegged at Rs 3 lakh and above, with a boot added, named Tata Indigo, for a lakh extra? Sure, the wheel base is 5 cm longer, a vital two inches for the rear passenger. There's a 420-litre rear cargo space, and more if you fold the rear seats. But even the hatchback packs decent luggage space. And the rest, barring minor touches, is Indica plus.

To help counter the inevitable, the Indigo has apparently decided to follow the Ambassador. It sports bigger wheels than the Indica, a softer suspension (read comfortable on bad roads), more power output and a new-fangled multi-link rear suspension. And the silhouette is beautiful. The lines on this car wax lyrical. Maybe that's why both Rajiv Dube and V. Sumantran from Telco grinned shyly when asked why the colours offered are so understated.

And, of course, the really important part. Borrowed from a 1954 road test of the Morris Oxford... "the ends of the rear seat backrest are swept forward to clear the wheel arches and increase seating comfort". Finally, half a century after Morris Garage figured this out, after a couple of decades of soiling trousers and sarees and salwars, somebody got it right here.

That's why some people will pay a lakh over the Indica for the Indigo. You finally get to sit comfortably in the rear seat "like in the old days". In a thoroughly modern car. The only one specifically crash-tested in India. And on how the car drives—no complaints from this correspondent at all. In both petrol and diesel versions, the speedometer eases past the 140 kmph mark effortlessly. Diagonal tandem independent braking circuits, a safety feature borrowed from trucks, is another excellent feature.

So what could go wrong?


Maybe Telco needs to reduce the price some more, so that the above factors become irrelevant.