They've come very far from the gutter that life threw them into; but his mother still calls Delhiites 'Hindustanis'. 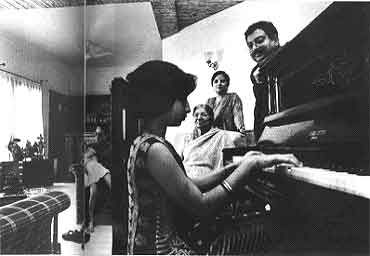 MY father, a Dera Ismail Khan man, was an officer in the Central Bank, Lahore, when it happened. My parents never experienced the riots. Just the displacement that came in its wake. Cash and gold was hastily transferred to the safety of bank vaults. In September '47, Dad despatched my mother, seven months pregnant with elder brother Kishan, to Mathura with his own mother and two teenaged brothers. There, the family stayed an year. First in a dharamsala, later in a two room tenement. Rent: Rs 4 per month.

Dad wangled a Delhi posting, so the family moved. There were no places available on rent those days. You could break in though into houses of people who had fled to the other side. My mother's uncle got himself a three-room furnished house in Paharganj that way. So Dad went one morning and locked a furnished house in Karol Bagh, only to return in the evening to find the lock broken and another emigre family ensconced within. Finders keepers was the law those days. He rented a one-room place sans toilet, kitchen at Nabi Karim, in the old city, where I was born six years later in 1954. What a room! One in several built around a dank courtyard with a roof that allowed no ray of light to shine through. A stinking open drain, usually choked, ran round the courtyard, right outside the rooms. Mother cooked on a brick choolah outside our room. There was no electricity. You needed torches to grope your way through at high noon. No running water either. You bought it for Re 1 per canister from a tanker. You couldn't sleep indoors at night for the stink, so you slept on the road outside. Ran in at dawn before the traffic started. Rent for these princely lodgings: Rs 6 per month.

Opposite was a graveyard that served as a giant open-air community toilet. Nightsoil breezes wafted across from there. Ma would often feel claustrophobic, edgy. Dad would take her, my brother and sister on his cycle to India Gate to get some fresh air. He couldn't afford any other vehicle or outing on his salary: Rs 75 per month, Rs 5 deducted towards provident fund.

The family had nothing. Just memories of friends, happier times, the light, airy, three-room Gwala Mandi house left behind in Lahore. And a nagging feeling of alienation. To this day my mother calls people from Delhi 'Hindustanis'.

The shift to a two-room place with a kitchen at Bhogal in 1956 was a big social jump for us. Rent: Rs 13 a month. Only six toilets for 12 houses. But to us that seemed like five star deluxe. There was air. Sunshine. And after the Rs 2 bribe to the neighbouring shopkeeper, electricity! AND running water. Fresh breeze that didn't smell of shit.

In 1961, Dad bought, for Rs 6,000, the Kingsway Camp house where I grew up. We live in my sprawling new house on Rajnarain Road now. My mother, my family and I. We've forgotten nothing. But what we remember most of all is the kindness of people who had far less than we did. People like Gobind Kaur, Sikh widow, mother of five, shoelace packer, our Bhogal landlady, who cooked mutton only once a month even in those days when mutton cost 50 paise a kilo. Because she couldn't afford it. Yet she'd send us a katori full without fail each time she cooked it. Each time. It was the best cooked mutton I'd ever eaten. Then. Or since.