The father of Pakistan's n-bomb is in the docks for his alleged knowhow aid to North Korea, Libya and Iran Updates 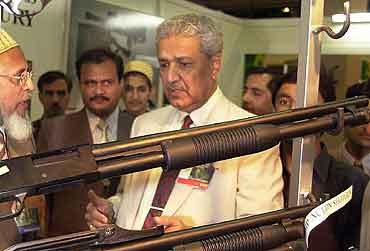 outlookindia.com
-0001-11-30T00:00:00+0553
Dr Abdul Qadeer Khan was once a name Pakistanis uttered in awe. Respected in government circles for his mercurial brilliance and revered as an icon by those who wanted to augment the country’s arsenal with nuclear weapons, Dr Khan truly earned the credit of being the father of Pakistan’s nuclear bomb. They loved him, counted him among the pantheon of modern heroes; even renamed the Kahuta Research Laboratories (KRL) as the Khan Research Laboratories as a token of their gratitude (the original name’s been now restored).

But Pakistan’s pride and inspiration has now become a cause of worry and embarrassment for his country. And what was earlier inconceivable is now a grim reality: Khan and 25 of his former associates at the KRL are undergoing debriefing for their alleged role in assisting North Korea, Libya and Iran for acquiring nuclear weapons. A former Punjab University professor who met Khan on January 21 told Outlook, "Dr Khan told me, ‘While India has elevated the father of India’s nuclear programme to the coveted slot of president, I’m being humiliated and treated as a thief.’"

Khan’s slide into disrepute has been sudden and tragic. Forced into retirement from KRL in March 2001, he was accused last year of masterminding the missile-for-nuke exchange with North Korea. And now an International Atomic Energy Agency (IAEA) report, leaked to the international media in December last year, claims Pakistani nuclear scientists (Khan’s acolytes) played a significant, clandestine role in Iran’s nuclear programme.

The IAEA report said the Iranian authorities had admitted to their inability to enrich uranium, confessing they acquired the knowhow through the help of several scientists, including five Pakistanis. Diplomatic sources in Islamabad say the FBI has passed on documents to the country, proving a 1986 nuclear cooperation agreement between Pakistan and Iran after Dr Khan visited the nuclear power plant Tehran had been building with Russian help. Subsequently, he travelled there several times, in the late ’80s and early ’90s. The plans and components, acquired over several instalments, enabled Iran to leapfrog over numerous major technological hurdles to produce its own enriched uranium.

Government sources say at least 25 nuclear scientists and staffers of the KRL are being questioned by a joint team of the Inter-Services Intelligence (ISI) and the FBI. The most sensational development has been the arrest of eight KRL personnel on January 18, 2004. Among them was Maj (retd) Islamul Haq who was arrested in a raid conducted at Dr Khan’s Islamabad residence; Maj Haq is Dr Khan’s principal staff officer. Others arrested include former director general of the KRL’s science and technology cooperation directorate and Khan’s assistant, Dr Mohammad Nazir; director, administration, KRL, Brig (retd) Muhammad Tajwar; and, surprisingly, the KRL sports wing boss, Mansoor Ahmed. Earlier, on November 23, 2003, KRL engineers Muhammad Farooq and Yasin Chohan were picked up from their Islamabad residences; both had worked under Dr Khan at the KRL. Farooq was responsible for procuring foreign supplies, Chohan headed the metallurgical research department.

Islamabad initially refused to deny or confirm the fact of Farooq and Chohan’s interrogation. It was only one day after The Washington Post detailed Pakistan’s alleged involvement in the Iranian programme on December 23 that a foreign office spokesman acknowledged the interrogation of some scientists and claimed there were "signs of personal greed" in the entire nuclear proliferation affair. But the other possibility —that of a larger involvement of the Pakistani establishment—was bolstered through an allegation Ishaq Dar, Nawaz Sharif’s commerce minister, levelled on December 25. He said during Sharif’s first tenure, then army chief Mirza Aslam Beg had sought clearance for transferring Pakistan’s nuclear technology to Iran for $12 billion. 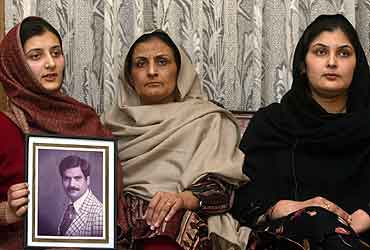 It now transpires that ISI chief Lt Gen Ehsanul Haq and chief of the Strategic Planning Division Lt K.A. Qidwai visited Dr Khan at his residence on January 21, and questioned him on the transfer of nuclear knowhow to a third country. Dr Khan told them the allegations against him were baseless, that it is impossible to penetrate the multi-layered, foolproof security and monitoring system at the KRL and smuggle out sensitive material. With the army responsible for the security at the KRL, and considering the massive size of the centrifuges, those close to Khan argue that such activities couldn’t have been undertaken without the knowledge of the army headquarters.

Given Khan’s popularity, foreign office spokesperson Masood Khan was cautious. "The factual situation is that Dr Khan has been asked questions, although he did not undergo debriefing." But Dr Khan’s movements have been restricted, and he has been subjected to debriefing, as borne out by the petition Maj Haq’s wife Nilofar filed at the Rawalpindi bench of the Lahore High Court seeking the release of her husband from the ISI’s custody. The petition states, "Dr Khan is under pressure and virtual restraint and the regime was making the nuclear scientists scapegoats to save itself. I was informed about my husband’s arrest by Khan on the phone and I have apprehensions that my husband will be handed over to the FBI."

Sources point to suspicion that some Pakistani scientists might have breached the strict export control procedures by making unauthorised, irresponsible contacts with foreign nationals. "In the process, these individual nuclear scientists may have been instrumental in leaking information or components to foreign sources," says a foreign office source. He refused to name the Dubai-based foreign individual (not Pakistani) who is said to have bought the loyalty of these scientists for hefty financial favours. Earlier, a British daily quoted FBI sources to claim that two Dubai-based Sri Lankans facilitated the transfer of nuclear knowhow from Pakistani scientists during the late ’80s. The FBI further believes Dawood Ibrahim’s network in Dubai was part of Pakistan’s nuclear supply chain.

The foreign office source also points to the leads one of the two Pakistani nuclear scientists detained last year gave on the misconduct of some top scientists. Says he, "The investigating agencies are more than convinced that these top scientists have stolen national secrets to satisfy their lust for money and live a luxurious life." He says some scientists had an ostentatious and opulent lifestyle, and their bank balances and palatial houses testify to wealth gathered through dubious methods. "The situation is alarming," the source adds.

The government has already barred personnel of the KRL and the Pakistan Atomic Energy Commission from travelling abroad, apprehensive that they might never return. At least nine senior Pakistani nuclear scientists have reportedly absconded from the country since 1997; the most recent incident being in July 2002. Eight of these absconders were senior engineers at chasnupp or the Chashma Nuclear Power Plant; one was an assistant engineer.

Dr Pervez Hoodbhoy, who teaches high energy physics at the Quaid-e-Azam University, Islamabad, pins a possible motive to Pakistan’s alleged proliferating impulse. "At the heart of the effort was a dangerously motivated clique of former Pakistani intelligence chiefs and Islamised Pakistani scientists who believed it was their moral duty to offer weapons of mass destruction to embattled Muslim states." Hoodbhoy and others feel Pakistan must resist the temptation of seeking scapegoats and come clean with the facts the investigation throws up. That could very well be asking for the impossible.

A Surrogate Sisterhood For Hire