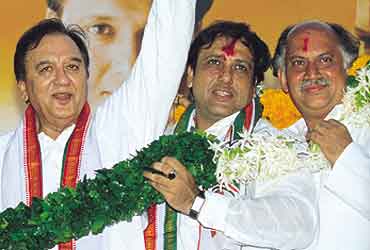 outlookindia.com
-0001-11-30T00:00:00+0553
Deep in the underbelly of Mumbai, Dharavi, sits Navneet Shinde with his four young friends. They quit college two years ago. Their families could not afford it. Besides, they wanted to be self-reliant. Shinde learned driving and registered himself with a private car rental firm. Ninety days later, he received a call. False hope. He has been to half-a-dozen car rental companies since, offering to work as a driver at even half the normal wages. But he is still awaiting the call that will bring him self-respect and his family some food. "There are days on which I skip a meal at home. I can't expect my father to feed us all," says Shinde. His father is a mathadi (coolie) worker, ferrying heavy goods on his head for Rs 100 a day and providing for a family of six. Shinde has even been to the employment exchange, walking the 20-km distance because he could not ask his father for bus fare. No luck there too.

When election fever was rising, Shinde and his friends re-energised their Tarun Mitra Mandal of like-minded young men in Dharavi and threw themselves whole-heartedly into Congress candidate Eknath Gaikwad's campaign. "At least it gave us something to do, and our food was taken care of." The first-time voters simply went around asking if their fellow Dharavites had ever seen their Shiv Sena MP and former Lok Sabha Speaker, Manohar Joshi. Listen to your heart this time, listen to Eknath Gaikwad, they exhorted at each door. Dharavi, Nehru Nagar and Matunga backed Gaikwad so heavily that Joshi was humbled. "Ours was not a fight between two candidates, but two ideologies," says Gaikwad, three-time mla and presently MoS for health in the Maharashtra cabinet. Gaikwad still lives in his 350 sq ft home in Dharavi. Coming in from the cold, he has now raised the hopes of thousands like Shinde.

Elsewhere, in a leafy bylane, live the senior citizen couple Saraswati and M.S. Narayanan. With their son in the United States, they largely fend for themselves. The last few years should have been a relaxed life but they were constantly plagued by a worry—how to keep paying bills in the face of falling interest rates. Typical of hundreds of thousands of such families, they put away their life's earnings, provident fund and gratuity in bank and company deposits to live off the interest. Thanks to Yashwant Sinha and later Jaswant Singh, falling interest rates spelt doom for such people. "This has never happened before. We planned our retirement, things were okay for few years, then interest rates started to drop every few months. The BJP-led government has given so much trouble to senior citizens that they have to account for it," says Saraswati. A traditional BJP voter, she chose the Congress this time. Thousands of other miffed senior citizens did the same.

Shinde and Narayanan are but two constituencies of Mumbai's discontented, disenchanted people. There are others that cut across class—autorickshaw drivers, truck and tempo owners, construction labour, fisherfolk across Colaba, Versova and Vasai, workers of closed industries in the manufacturing and engineering sectors, educated and uneducated young job aspirants who saw only bleak futures for themselves. The huge swathe of Mumbai's middle class living in chawls, slums and modest highrises, traders upset over international retail chains, investors burnt by the US-64 debacle, cooperative banks and Ketan Parekh scams, migrants from Bihar and other states who were beaten up for daring to write a railway recruitment exam in Mumbai. Lakhs of tenants ousted from PSU-owned property in central Mumbai, privatisation of PSUs which tanked more jobs and, of course, six-and-a-half million train commuters who saw little improvement in their daily grind. The discontent was directly or otherwise linked to the economic policies of the NDA government. Parliamentarians did not even raise questions, leave alone fight for the city. It hurt the electorate. When their turn came, they voted out the NDA giving Congress five out of six seats in Mumbai for the first time in 20 years. 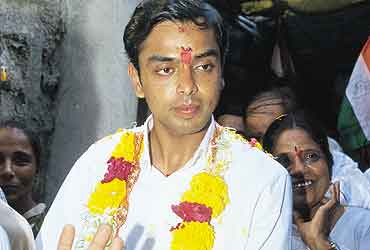 The Congress-NCP combine was on a roll. This alone explains how a novice like Milind Deora could defeat a veteran like Jayawantiben Mehta, and Sanjay Nirupam of the Sena, despite a spirited campaign, was no match for Sunil Dutt. Kirit Somaiya fell before Gurudas Kamat. The only saving grace was Mumbai South Central where Mohan Rawale defeated his NCP rival.

If you read between the lines, the result is a victory of reality over hype. It's true that Mumbai is home to more privileged people as well, who saw their lives soar. The most charitable estimates put this section at 10-15 per cent of the city's population. At the BJP chintan baithak this week, the conclusion reached was: the middle class had turned against the party. "Unemployment, VRS, PSU privatisation, no jobs, all are responsible. We underestimated the discontent," said party general secretary Pramod Mahajan. The NDA dropped six per cent votes from their 1999 ground.

Hit by the Govinda tornado, BJP's Ram Naik is yet to recover. For years, touted as the squeaky-clean, concerned-for-Mumbaikars MP, Naik's decisions as Union petroleum minister—rising fuel prices and disinvestment of oil companies—angered his middle-class supporters. Add to that the rage of the fisherfolk who agitated against the government policy of allowing international large-scale trawlers, and the ire of the local train commuters who saw Naik do nothing to make their life easier. Both these 'votebanks'—fisherfolk and train commuters—play an important role in Naik's constituency, Mumbai North. "Naik became a ghoshna and ashwasan (announcement and assurances) minister, a reflection of the government itself," says Vasai's social activist Nikki Cardozo.

Antagonise labour and it is a recipe for disaster. For, Mumbai is a city of work, jobs and livelihood. The organised sector alone, which employs around a million people, dropped over 10 per cent jobs. This sector accounts for just a fraction of the city's workforce but it is the most visible and articulate. The desperation, captured by trade unions last year on the eve of the World Social Forum, was successfully tapped into during the election campaign. "Economic policies showed the BJP to be very much with the wealthy and mncs. People saw this affecting their lives and they voted against it," says Vivek Monteiro, general secretary of the Maharashtra CITU.

There is also a rural-urban spillover, says sociologist and urban affairs researcher Prof Uday Mehta. Mumbai is a city of migrants who know "their India" back home is not at all shining. It adds to their disenchantment and raises the level of urban discontent, he explains. At times, the issue is local but gets transmorphed on to a Lok Sabha poll. Take Girgaum, where rehousing of slums was to take place on Jagannath Shankar Sheth Road. But a portion of this road falls in the Coastal Regulation Zone, which did not permit construction of low-cost houses. The MP, Jayawantiben Mehta, did not hear the slumdwellers out and paid for it at the hustings. In elections, small disappointments and discontent ride piggyback on national policies more than at any other time, especially if there is no overarching emotive issue. In Mumbai, as in other metros of India, the discontent of the people was matched only by the stark subterfuge of the NDA campaign. "India Shining was an emotion. Lots of us did not feel that emotion at all. For many of us, it was a lie," says Prof Mehta. That humble truth was brought home as a revelation to many.